Half way between Sydney and Los Angeles, Tahiti is perfect for two weeks in paradise, as the gateway for an island hopping adventure or for a relaxing break on a round the world trip.

Tahiti was formed millions of years ago by underwater volcanic eruptions and is the largest of the French Polynesian Islands. There are five archipelagos in French Polynesia; the Society Islands, Austral Islands, Marquesa Islands, Tuamotu Atolls and the Gambier Islands. Tahiti is the best known of the Society Islands, which also include Moorea, Bora Bora, Maupiti, Tupai, Taha’a, Huahine, Raitea and Tetiaroa.

Air New Zealand provides the fastest and easiest way of getting from London to Tahiti, with daily flights from London Heathrow to Los Angeles and direct connections with Air Tahiti Nui to Fa'a'a International Airport, Papeete,Tahiti. Flying time is approximately 22 hours.

Air Tahiti operates regular inter-island flights. Inter-island boat travel is less common and not as frequent, with the islands of Moorea and Huahine being the easiest to reach, by either ferry or catamaran from Tahiti.

So, why not make Tahiti your main island, hop between the Society Islands or even combine your stay with a trip to the United States, Japan, Australia or New Zealand?

Step into Paradise on Bora Bora, which is said to have been the first island in French Polynesia to be discovered. It’s easy to see why this island is so popular with honeymooners. A stunning cobalt sea contrasts with dazzling white sand beaches to create a picture-perfect setting. Bora Bora is one of the best places to swim with manta rays and reef sharks, so if you love snorkelling and diving – this is your island. Dramatic and stunning, you’ll catch your first glimpse from above, if arriving by air, of one of the most beautiful islands in the world. The myriad shades of blue and green in the lagoon are what makes South Pacific holidays so enchanting, so be sure to drink in the sights on a short flight from Tahiti. 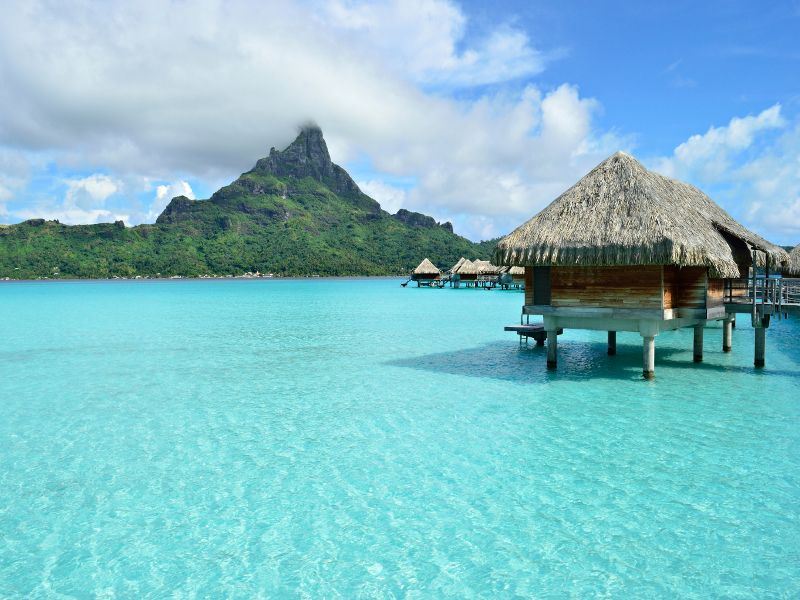 Fly from Tahiti to reach Maupiti or as the next stop on your island hopping adventure after Bora Bora. Just 15 mins by air from Bora Bora – Maupiti is one of the most beautiful islands in the South Seas. Perfect for relaxation – the coastal and verdant inland charms of this island are immediately obvious, but there’s plenty to keep you active too. Adventure seekers can climb to the summit of the island (Mt Teurafaatiu), 380 metres high and look down on translucent waters and sandy little motu (islets). Beach lovers will want to spend time chilling out on lovely Tereia Beach or snorkelling the waters. This is also a lovely little island perfect for exploring by bike. However you choose to spend your time, you’ll love Maupiti.

The true heart of the Polynesia Islands, a tiny atoll just north of Bora Bora which can be reached by air from Tahiti. Tupai is actually shaped just like a heart – a truly romantic little island, popular with honeymooners or as the place to say “I Do” under coconut trees and beside turquoise lagoons. It’s also the perfect place to pop the question. Imagine starting your day with an island tour by air and ending it by sipping champagne as the sunsets over paradise? Go kayaking, snorkelling and try traditional island cuisine. Take a boat trip out to explore around the island’ heart shaped coastline and watch as your boat captain brings aboard a tasty fish or too for picnic lunch.

Pack your bags for the ‘Vanilla Island’, where locals grow vanilla and watermelon in the green and fertile valleys of the small island of Taha’a. There’s no airport on Taha’a but you can hop on a flight from Tahiti to sister island Raiatea and then catch a boat across.

You’ll smell the aroma of vanilla, which grows like black gold on this pretty little round island. Extend your culinary journey, sampling delicious mahi mahi with vanilla sauce, whilst on your island hopping adventure. Let Taha’a seduce you with her beautiful beaches, coral reefs and tiny deserted motus. Escape the modern world with an unforgettable day trip to this little slice of heaven. 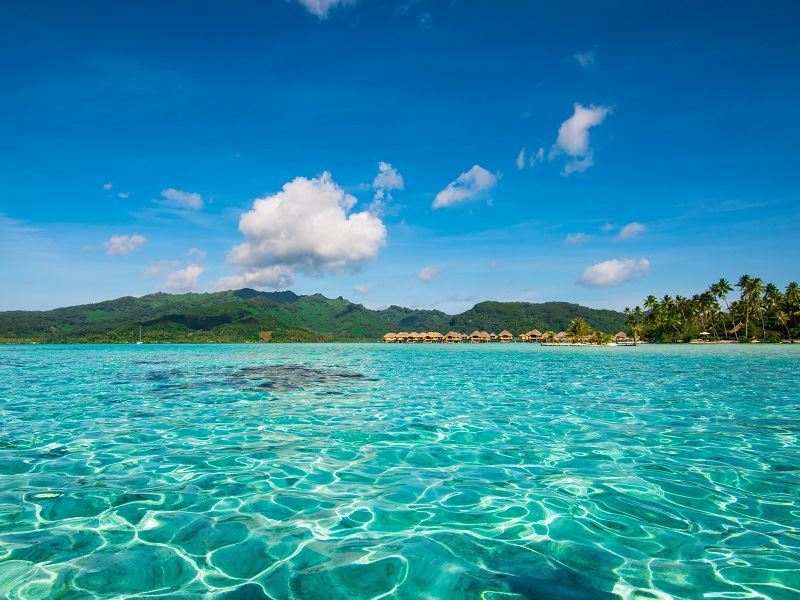 Weekly boat departures are available from Tahiti to Huahine, or you can take a 40-minute flight to the island, which is referred to as Tahiti’s ‘best-kept secret’. A tranquil island of rolling hillsides with lush tropical foliage, here you’ll find authentic little villages with traditional farming methods still in evidence. Look out for vanilla, coffee, bananas and watermelons growing here amid the rich soils. Awe-inspiring landscapes, natural forests and crystal-clear lagoons are just a few of Huahine’s many attributes. You should also prepare for a warm and friendly welcome from the residents of eight small villages dotted around the island. A truly enchanting place to visit if you’re looking for a tranquil getaway that feels like you’ve not only entered another world but also stepped back in time.

Just 12 miles north-west of Tahiti, catch a short flight and drop by in Raiatea to visit the second largest island in French Polynesia. There are marae sites all over the islands, but Raitea boasts the most well-preserved site in the whole of French Polynesia. Ancient Polynesians worshipped multiple gods and travelled to these stone temples to honour their gods and pray for good harvests or victories against their enemies. Explore the Taputapuatea marae to see the cradle of Polynesian civilisation and the birthplace of their golds. It is also the point from which early navigators left to settle on other South Pacific islands. From Raiatea you can also visit her sister island of Taha’a – the protected lagoons in the area make these islands a popular choice for sailors, divers and deep sea fishing enthusiasts.

Moorea sits just off the coast from Tahiti and is the easiest island by far to reach by boat, with several companies going back and forth daily, taking about 30 minutes each way.

Moorea – meaning ‘yellow lizard’ is the inspiration behind the award-winning book ‘Tales of the South Pacific. Enjoy your own barefoot island experience in the South Sea, with adventures aplenty on land and water. Sitting in a shallow lagoon, encircled by coral reefs and multi-hued waters, Moorea’s gentle lagoon is the perfect place to try paddle boarding, water skiing and kite boarding. Spend time on beautiful Temae Beach, with white sands and outstanding views across to Tahiti. Explore inland and you’ll encounter eight mountain peaks, soaring dramatically over lush green valleys, cascading waterfalls and pretty houses in every shade of pastel.  Go hiking, horseback riding and on ATV adventures, to explore this beautiful island. 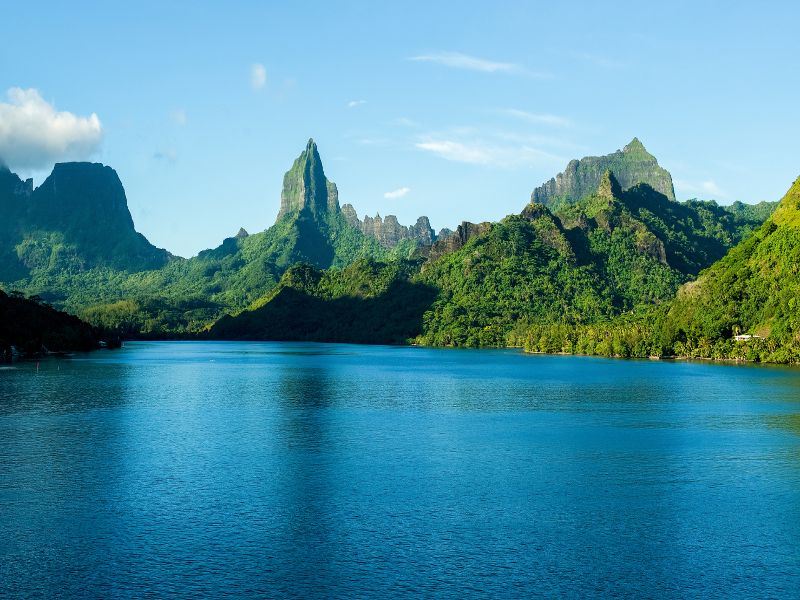 A remote island paradise that A-list celebrities and royals all adore. You can reach this South Pacific atoll via a 20-minute private plane flight from Tahiti. Best known as Marlon Brando’s private island, Brando fell in love with Tetiaroa whilst scouting for film locations for Mutiny on the Bounty here in 1962. He went on to buy the island and built a luxury resort which is committed to supporting local environmental and sustainability issues. Surrounded by coral reef, Tetiaroa is a divers paradise, with more than 160 species of fish, including parrotfish and spotted eagle rays. Dolphins and whales are often spotted off the coast too and sea turtles come to lay their eggs on the coral sands.