Getting around Tahiti and where to stay

Tahiti will fulfill all your South Pacific island fantasies. Picture idyllic beaches, turquoise ocean and luxury resorts with overwater villas. Experience world-class diving, volcanic mountain ranges, sumptuous spas and lagoons teeming with marine life. Tempted to visit? Then check out our guide to getting around Tahiti and where to stay. 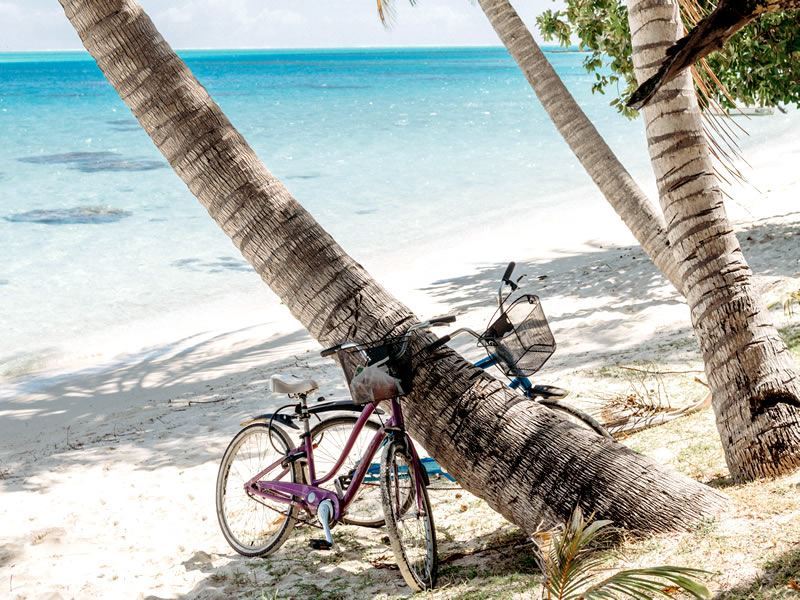 Getting from the UK to Tahiti

Flights to Tahiti’s Faa’a Airport go from the USA and New Zealand. The most convenient route from the UK is to fly via Los Angeles International Airport or San Francisco International Airport. It takes around eight hours to fly from both of these destinations directly to Faa’a with carriers such as Air France, Air Tahiti Nui, French Bee, Delta and Quantas.

London Gatwick and Heathrow offer direct flights to LA with a range of airlines like Norwegian, British Airways and United. The journey takes just over 11 hours, you can also fly with Thomas Cook Airlines direct from Manchester. For San Francisco, 11-hour direct flights go from Gatwick with Norwegian, or you can opt for longer connecting flights with alternative airlines from Heathrow or other major UK cities. 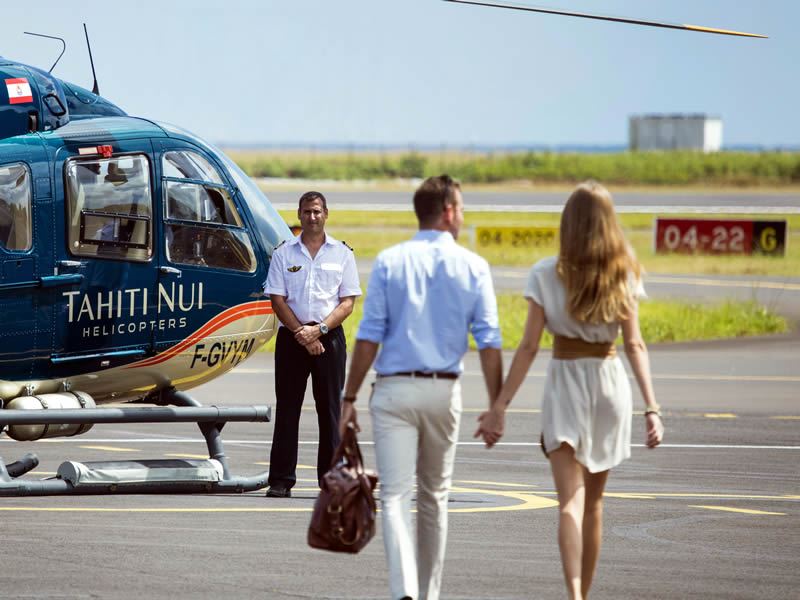 Tahiti is the largest of the 118 islands and atolls that make up French Polynesia, which lies halfway between LA and Sydney. The islands are divided into five archipelagos that are often collectively referred to as Tahiti, or Tahiti and its Islands. These are:

These are the most frequently-visited. This group encompasses the following islands which are popular for their lagoons, volcanic mountains and first-rate resorts:

•    Tahiti – the island’s capital Papeete features the international airport, a craft market and food truck scene. Visit the Robert Wan Pearl Museum and learn about French Polynesia at the Museum of Tahiti and her Islands. Other highlights include the Arahoho Blowhole, Mount Orohena and of course, picture-perfect beaches and lagoons
•    Moorea – is just a 30-minute boat ride from Tahiti. The island is less developed than Tahiti and filled with mountains, forests and waterfalls, which you can explore on a 4WD day trip. Moorea has its own topaz lagoon and is popular for hiking and watersports
•    Bora Bora – a famous honeymoon mecca, Bora Bora is one of Tahiti’s favourite destinations for upscale resorts. The volcanic island is home to mount Otemanu, has a flawless lagoon and is laced with sugary beaches shaded by coconut palms
•    Tupai – this heart-shaped islet lies just 10 miles from Bora Bora and has a double lagoon. Tupai is a haven for nesting sea turtles, tropical birds and has an authentic Polynesian vibe
•    Raiatea – is known as the Sacred Island and is the second-largest after Tahiti. Raiatea boasts a UNESCO site, the historic meeting ground Taputapuatea. Its protected lagoon is loved by sailors, divers and deep-sea fishers
•    Taha’a – shares its sister island Raiatea’s crystal lagoon. Taha’a is renowned for its pearls and fragrant vanilla farms which guests can tour at the Vallée de la Vanille
•    Huahine – deemed the Garden Island for its natural beauty, Huahine is actually two islands surrounded by a lagoon, filled with dense jungle dotted with banana groves and coconut plantations. The lush interior is complemented by sparsely-populated beaches
•    Maupiti – this tiny island features five-star resorts ideal for a honeymoon, many with private stretches of pristine beach
•    Tetiaroa – this uninhabited island is owned by actor Marlon Brando, who fell in love with it while filming Mutiny on the Bounty. Tetiaroa was also once a holiday destination for Tahitian royalty and today can be visited from Tahiti or Moorea 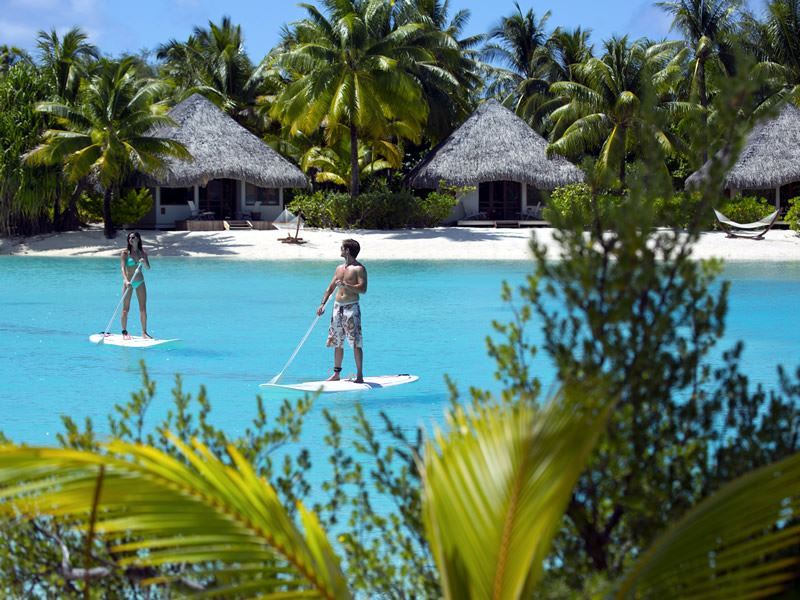 This group of 77 islands is famed for its castaway feel. The most common islands to visit are Rangiroa, Tikehau, Manihi and Fakarava, all of which have their own peaceful lagoons. The area is a world-famous diving and snorkelling site with exquisite marine life, particularly off Rangiroa, which is surrounded by over 200 islets and thriving reefs. Locals get most of their income from sourcing black pearls and coconut.

Set nearly 1,000 miles south of Tahiti, the Gambier Islands are some of the most isolated in the region. Four islands; Mangareva, ‘Aukena, Taravai and ‘Akamaru share the same sparkling lagoon and are surrounded by rugged islets.  Visitors can tour pearl farms and colonial churches and convents from the 1800's.

These are a four-hour flight from the Society Islands and some of the wildest in the region. Just half of the 12 islands are inhabited, featuring jagged cliffs and peaks. The largest island, Nuku Hiva, boasts crashing waterfalls and valleys, as well as ancient religious sites. Visit Hiva Oa for its history and giant stone Tiki or head to Hiva Oa, the paradise where artists Paul Gauguin and Jacques Brel lived.

These seven unique islands are set on the Tropic of Capricorn and have a cooler climate with their own ecology. Come to the Austral Islands for Polynesian villages and stunning beaches, mountains and valleys. You can also spot humpback whales here between August and November. 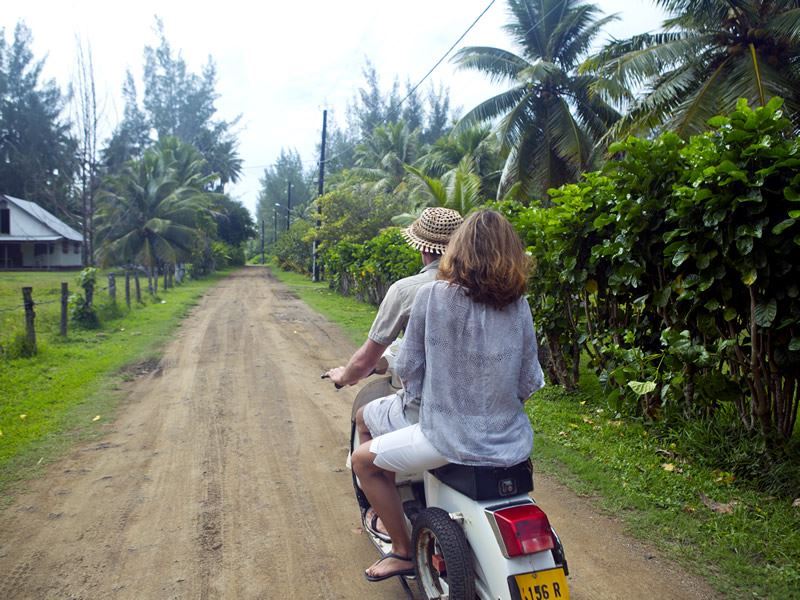 Getting around Tahiti and her islands

Most visitors spend their holidays in fancy resorts on the most well-known Society Islands: Tahiti, Bora Bora and Moorea. However, it’s possible to explore the region further with the following forms of transport:

•    Car – car hire is available on some of the larger Society Islands, many of which have a central road that circles the island. The paved roads on Moorea, Tahiti and Bora Bora are the most developed but you can also take 4WD tours of some more undeveloped islands. Taxis are available on larger islands but can be expensive, it’s a good idea to arrange one through your hotel and agree a price before you ride
•    Boat – it’s easy to get around the Society Islands by boat and many ferries and catamarans run from Boulevard Pomare in Tahiti’s capital Papeete. Schedules change regularly but the two main companies are Aremiti and Terevau. As a rough guide, it takes around 30 minutes to get to Moorea from Papeete
•    Plane – Air Tahiti runs regular flights from Tahiti to 47 islands in the region. The best option is an island-hopper ticket, which allows you to visit different combinations of islands. The Discovery Pass is a top choice and includes Huahine, Moorea and Raiatea. You can also purchase extensions to the far-flung Austral and Marquesas Islands
•    Bus – there are some bus services available on the main islands. Moorea has a round-island bus that runs from the ferry terminal. On Tahiti, the colourful local trucks have now been replaced by modern air-con buses which stop at various spots around the island, fares cost less than £2 a ride
•    Bike – most hotels offer free bicycles that you can use to leisurely get around the islands 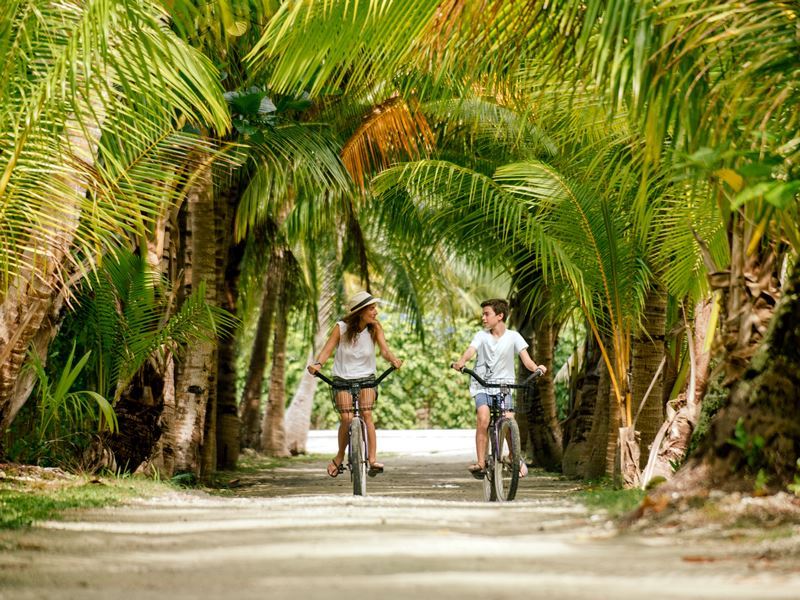 Exploring Tahiti on a cruise

What better way to explore this Polynesian paradise than by boat? Our Tahiti & the Society Islands Cruise is the perfect option, offering seven nights aboard the grand MS Paul Gaugin ship.  The journey starts and ends in Papeete and sails the South Pacific, stopping off for snorkelling, kayaking and diving adventures. You’ll visit Huahine, Bora Bora, Taha’a and Moorea, where there’s a chance to shop at markets, laze on private beaches and trek in the rainforest. Additional extras include dolphin watching trips and a helicopter tour over Mount Otemanu. 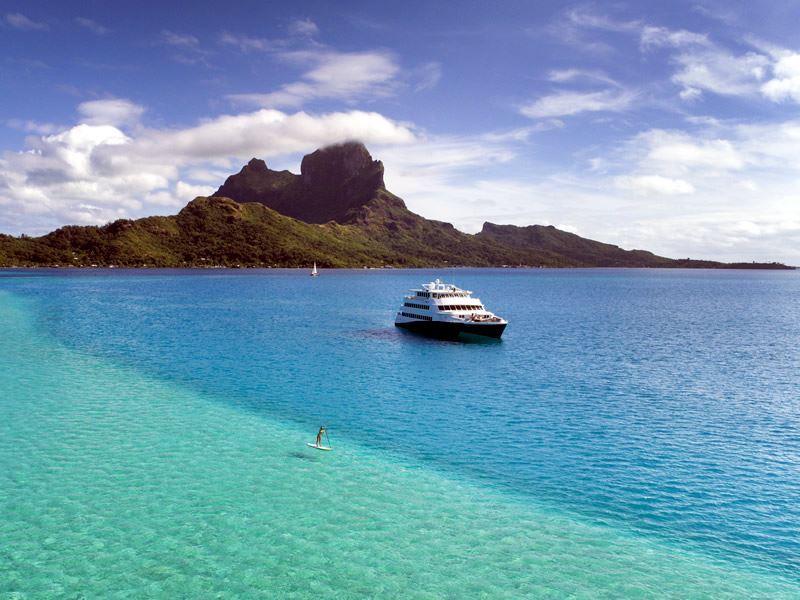 Aside from relaxing on some of the world’s top beaches, there are plenty of activities to keep you busy in Tahiti, here are the main draws:

This vibrant public market is set in Tahiti’s capital Papeete and has been running for over 150 years. Peruse the stalls selling traditional Tahitian clothes, tropical fruit, vanilla and locally-made handicrafts, jewellery and souveniers. Smaller fruit stalls can be found dotted around the islands - such as in Moorea. 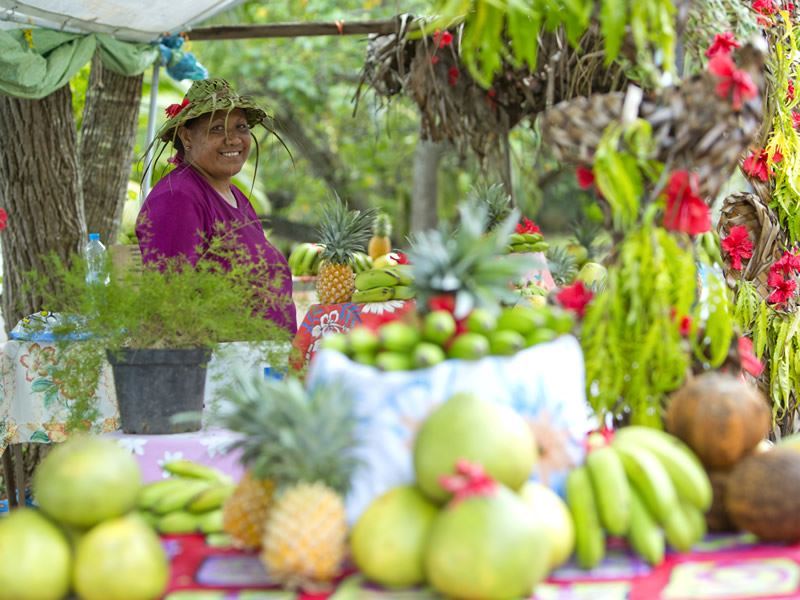 This geological wonder lies on the north side of Tahiti Nui. Formed from coastal erosion, watch as big swells crash into the cliffs creating a spectacular natural blowhole.

Tahiti lies in an Exclusive Economic Zone, which is a designated wildlife sanctuary. This means the waters are some of the best in the world for diving and snorkelling, with rich coral reefs and over a thousand species of marine life. This includes over 20 types of shark as well as dolphins, manta rays and turtles. There are dive centres on 11 of the islands, including Bora Bora, Tahiti and Moorea. Highlights for divers include deep ocean drop-offs, shark sightings at Tiki point, Bora Bora’s huge lagoon and thrilling drift diving at Avatoru and Tiputa pass near Rangiroa. 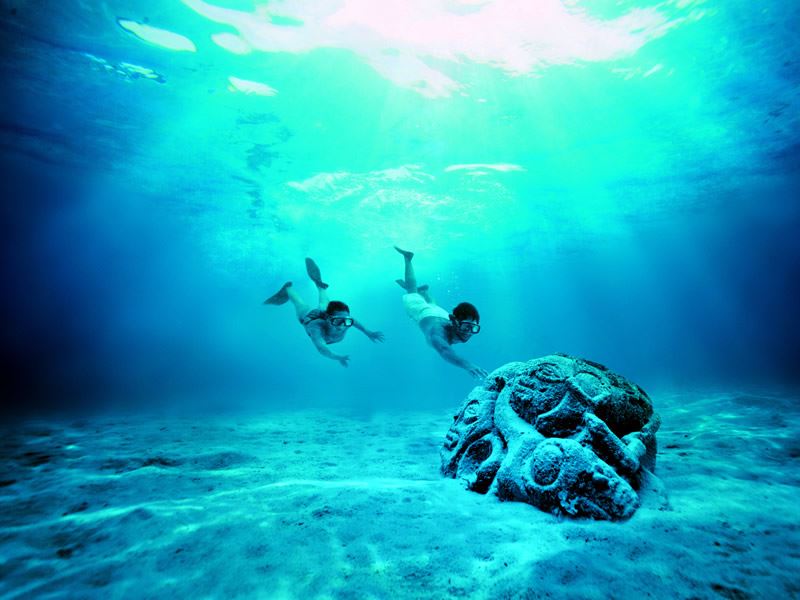 Many resorts in Tahiti offer watersports including sailing, waterskiing and kayaking. Surfers can experience the biggest waves between May and August, with experts attempting one of the world’s most dangerous surf break at Teahupoo.

It’s possible to spot humpback whales on boat trips from July to November, when they come to Tahiti’s waters to calve. Rurutu is a good area for sightings. You can also see a variety of bottle nosed and rough toothed dolphins, which are protected in the area. 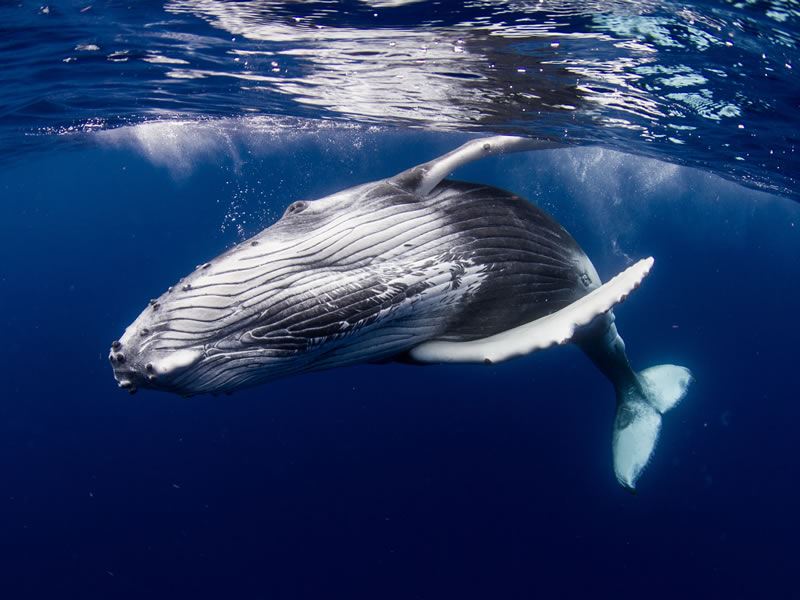 As a top romantic destination, Tahiti has a number of opulent spas ideal for a pampering session, many set in open-air bungalows by the ocean. Choose from a range of body, face and hair treatments including massages, manicures, masks and wraps. Try the Polynesian Taurumi, a massage that focuses on applying pressure to energy lines in the body. 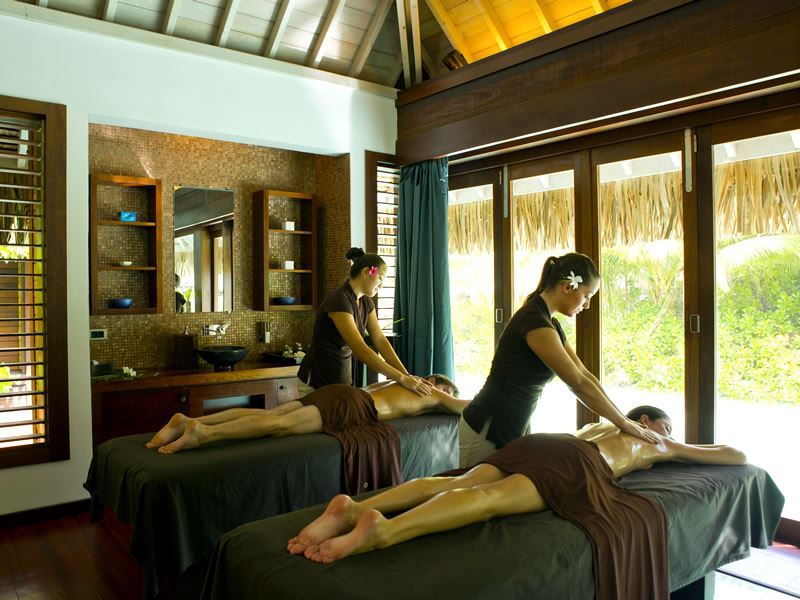 To learn more about French Polynesia and its culture, visit some of Tahiti’s museums. Start with the Museum of Tahiti and her Islands, then visit the Black Pearl museum to see the world’s largest collection of these precious objects. Art fans shouldn’t miss the Paul Gauguin Museum, which celebrates the work of this French artist.

Tahiti’s biggest draw is its incredible beaches, which range from pure white to pink and black. There are hundreds to choose from, but here are five of the best:

•    Matira Beach – this mile-long stretch of white-sand lies on Bora Bora and is backed by green hills, with gentle waters for bathing
•    Les Sables Roses – this distinctive pink-and-white beach lies near the southern tip of Rangiroa and is only accessible by boat
•    Avea Beach – set on Huahine, Avea is a palm-fringed crescent of powdery white sand that curves along the southwest tip of the island
•    Lafayette Beach – lay back on striking black sands at this quiet beach in Tahiti’s Matavai Bay, which stretches for 800 metres
•    Temae Beach – set in Moorea, this white sand and coral beach comes complete with mountain views and is a great choice for snorkelling 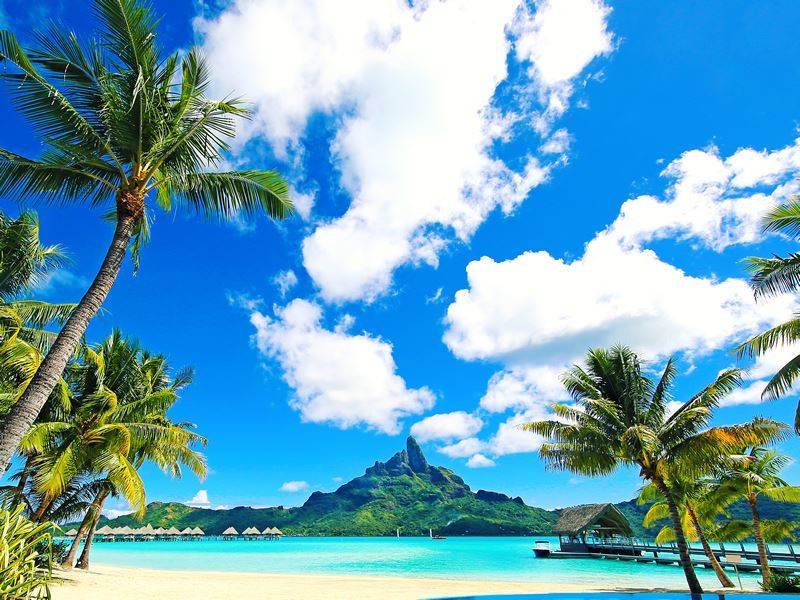 Best places to stay in Tahiti

Tahiti is known for its luxurious hotels, resorts and guesthouses, here are some of the best options:

•    The Brando – this secluded hideaway is set on the Tetiaroa atoll just 30 miles from Tahiti. The eco-friendly resort features 35 beachside villas with private decks and plunge pools overlooking the lagoon. Sample watersports and two restaurants and receive a daily spa treatment
•    Four Seasons Resort Bora Bora – located near Mount Otemanu on a private islet, this iconic resort offers chic beachside and overwater villas. The Four Seasons has a kid’s club, sports facilities, a large pool and restaurant
•    St Regis Bora Bora Resort – is set on the northern coast of beautiful Bora Bora near Mount Otemanu. Soak up the lagoon views and relax on white sands, bathe in two pools, try some watersports or visit the spa. Stay in Polynesian-style thatched-roof villas or opt for the Royal Estate, which has its own private beach area
•    Sofitel Moorea La Ora Beach Resort – one of the best resorts on Moorea, the Sofitel sits on the edge of the lagoon and features 112 bungalows set on the beach, above the lagoon or in the gardens. Enjoy private terraces with direct access to the beach or lagoon, there’s also a pool, spa, watersports and excursions 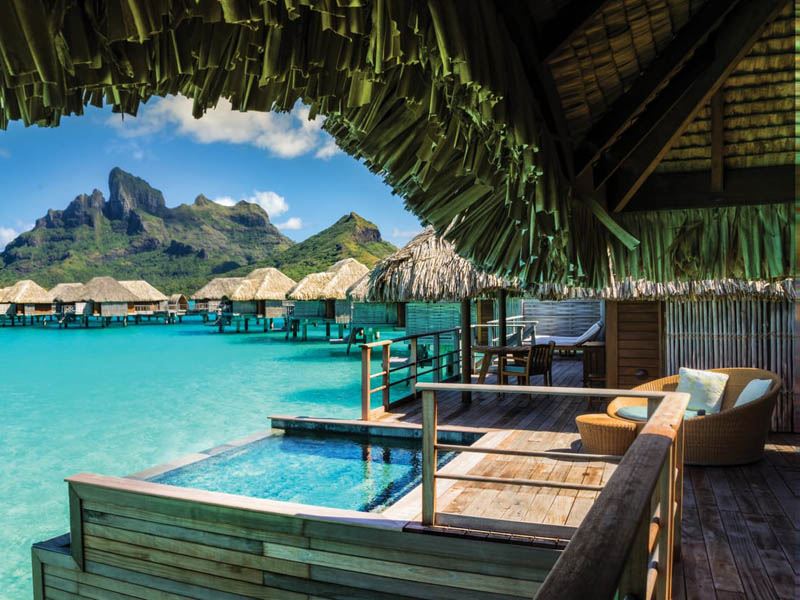