Few beaches can claim to be so enchanting they’ve commanded their own Hollywood movie. The mysterious Koh Phi Phi, Thailand’s island superstar, is one such place. The legends that shrouded this remote island in famous secrecy led to Leonardo Di Caprio starring in The Beach, an epic adventure drama based on the book of the same name. Koh Phi Phi is an archipelago of six islands, four of which are little more than limestone karsts jutting out of the sea. 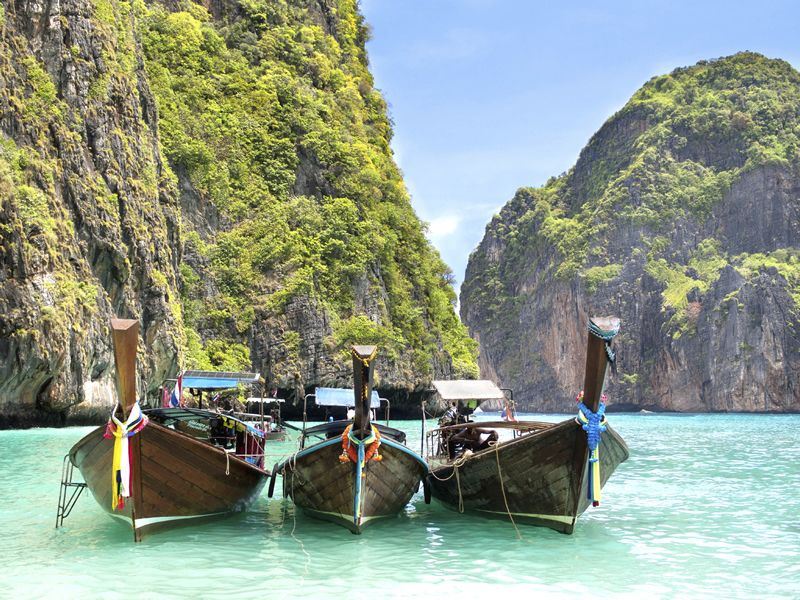 The main island is Koh Phi Phi Don, which is inhabited but still beautifully bereft of roads and cars, lending it a laid back aura of a place where time has stood still. The neighbouring Koh Phi Phi Leh is completely uninhabited but accessible by boat and regular day trips run to Maya Bay; the place that made the man in charge of choosing where to film, director Danny Boyle, decide it could only be Thailand.

The beaches on Phi Phi are much more than a powdery carpet to catch rays on. As the white sand tumbles down into the water, pristine, colourful coral reefs fringe the coast of the Andaman Sea. The underwater topography is punctuated by canyons, caverns and caves, which house seahorses, pipefish and Amazon red-tails trying to avoid the leopard sharks sleeping in the sand. For those without a PADI, the jaw-dropping limestone cliffs soaring above blue-green lagoons provide the perfect arena for snorkelling and splashing around in the shallows.

Accommodation is plentiful and ranges from basic beach shacks to the five star splendour of the Zeavola Resort, which takes its name from the Latin term for the exotic Half Flower Tree. Zeavola is a romantic, rustic resort nestled away on the northern tip of Phi Phi, where you can step back to simplicity whilst still being surrounded by luxurious creature comforts.

As the sun retreats and darkness falls each evening, the bars begin to open. Choose from glowsticks and beachfront beats at the boisterous Ibiza bar, hammocks and atmospheric house music at Mojito Bar or surrender to the inevitable fire jugglers at Carpe Diem. Alternatively, The Reggae Club in the centre of town offers a fully stocked bar, and a boxing ring for anyone who’s brave enough to volunteer themselves for a fight. Thailand’s national sport of Muay Thai is deeply intertwined with their country’s culture and history, and was developed centuries ago as a way for Thai men to defend themselves and their kingdom from the never-ending stream of invasions from neighbouring countries. It is also referred to as ‘The Art of Eight Limbs’ as it uses eight points of contact when kicking and punching: hands, elbows, knees and feet. Within the notorious Thai prison system, Muay Thai holds a special place. There is a nationwide, annual, televised tournament in which any willing inmate can participate. The winner is granted a pardon and a clean record as their trophy. Only in Thailand.

This region is in the administrative district of Krabi, which is a melting pot of Buddhists, Thai-Chinese, Muslims and even Sea Gypsies. With such varied traditions and beliefs, Koh Phi Phi is always celebrating some kind of cultural festival with fireworks, Chinese lanterns or longtail boat races. This diversity, the diving, the people and the natural beauty is why Phi Phi is one of the best beaches; not only in Thailand, but in the world.