Top 10 most photogenic wonders in Malaysia

From the glittering skyscrapers of Kuala Lumpur and the colonial architecture of George Town to the rolling green hills of the Cameron Highlands and the wildlife-rich rainforests of Borneo, Malaysia is a photographer’s playground where you can’t fail to get spectacular shots. We visit ten iconic places that will have you clicking away like crazy. 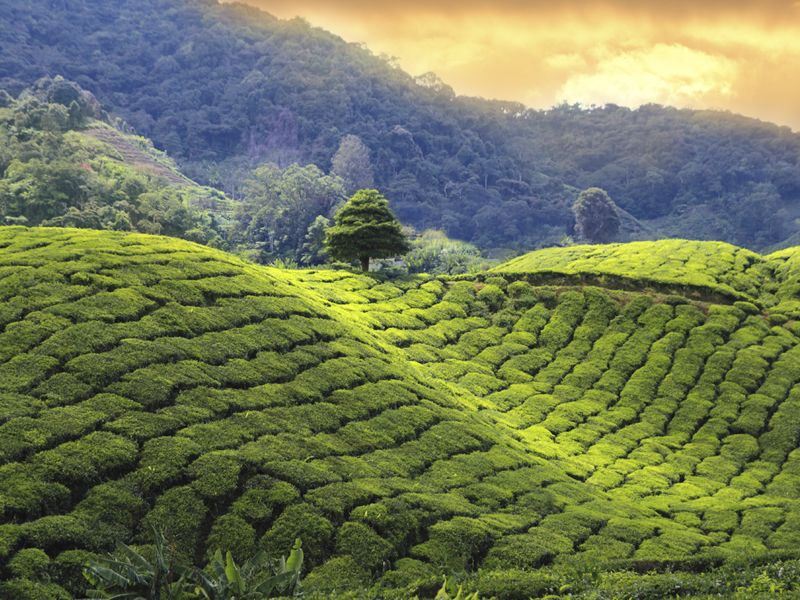 Of all the dazzling mosques in Malaysia, it’s the gold-domed Melaka Straits Mosque (also known as Masjid Selat Melaka) on the man-made island of Pulau Melaka that has been grabbing the limelight in recent years. Built in 2003 (it was completed in 2006 and officiated that same year by Malaysia’s Supreme Ruler), this fantastical structure of ultra-modern Middle Eastern architecture and classic Malay decor gives the illusion of “floating” over the Straits of Melaka at high tide. The design alone is worthy of a photoshoot, especially the stained glass, the bamboo and teak platforms, the majestic arch that curves gracefully over the entrance, and the 30-metre-high minaret that acts as a beacon for boats, ships, and aircraft. Non-Muslim visitors are graciously welcomed inside the mosque outside of prayer times so long as they stick to the strict dress code and remove all footwear (free-to-borrow headscarves are available for women).

Get the shot: Rock up here first thing in the morning to see the light bouncing off the golden dome - or visit in the evening when the mosque is illuminated and seems, by all accounts, to be skimming on water. As you’ll find at most sacred sites, interior photography is not allowed. 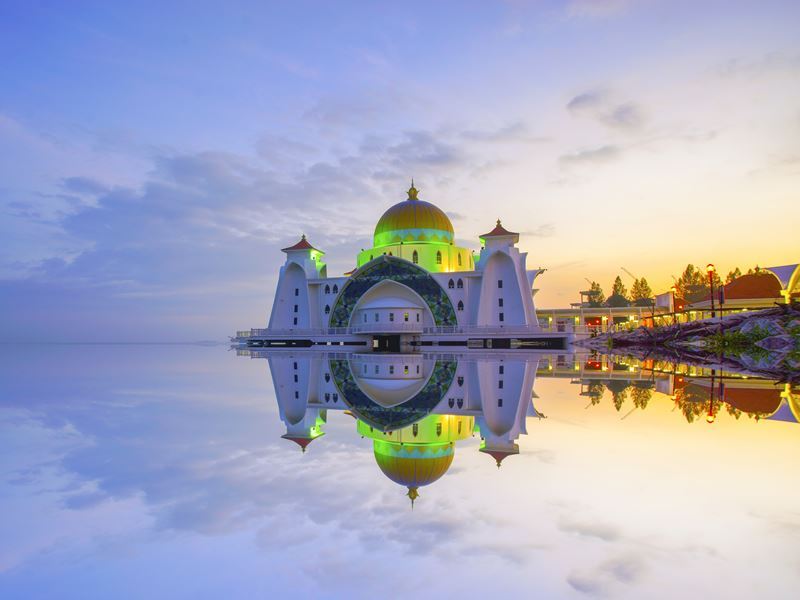 The tallest buildings in the world until 2004 when Taiwan’s TAIPEI 101was built, the 88-storey-high Petronas Twin Towers are the dynamic duo of stainless steel and glass-clad skyscrapers that define Kuala Lumpur’s skyline. Completed in 1998 and designed by Argentinean-American architect César Pelli as the headquarters of Malaysia’s oil and gas company Petroliam Nasional, these $2 billion structures stand at nearly 452 metres tall - with both 300,000-tonnes towers joined at the 41st and 42nd floors by a 58-metre-long Sky Bridge at 170-metres above street level. As you’d imagine, the visual thrills are endless; from each tower's floor plate with cutting-edge design based on Islamic geometric forms of two interlocking squares to create a shape of eight-pointed stars, to the cultural art motifs on the facade. Equally standout are the pinnacles that feature spires with 23 segments and ring balls comprised of 14 rings of varying diameters.

Get the shot: Although the vertigo-inducing Sky Bridge and Observation Deck both afford amazing city views, you’ll need to be at ground level to photograph these doppelganger towers. For the best images, make a beeline for the lush green KLCC Park (ideally at dusk or dawn). 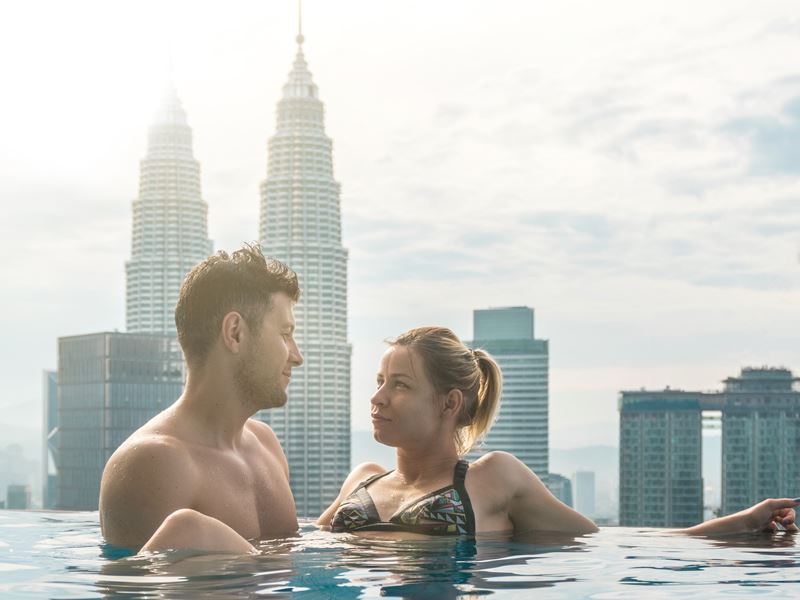 As the buzzy capital of Penang and one of the most prominent trading ports linking the East and West, George Town triumphs when it comes to outstanding street food, inspiring street art, unique museums (the Asia Camera Museum is an essential detour), and a historic core that was bestowed UNESCO World Heritage Site status in 2008. Most make a beeline for the city’s atmospheric streets to admire the heritage architecture; over 12,000 old buildings including Chinese shophouses, churches, temples, mosques, residential jetties, colourful townhouses, and grand mansions in various states of restoration or deterioration. Further thrills await at the Esplanade, the seafront promenade famous for its British colonial government offices and memorials such as the Queen Victoria Memorial Clock Tower, City Hall, Town Hall, State Legislative Assembly, Cenotaph, Logan Memorial, and star-shaped Fort Cornwallis.

Get the shot: Take a walking tour (or hire a trishaw) in the morning or early evening to avoid the intense heat. For panoramic city shots, brace yourself for a sweaty walk to the top of Penang Hill (also called Bukit Bendera) - a collection of granite peaks rising to 833-metres above sea level. 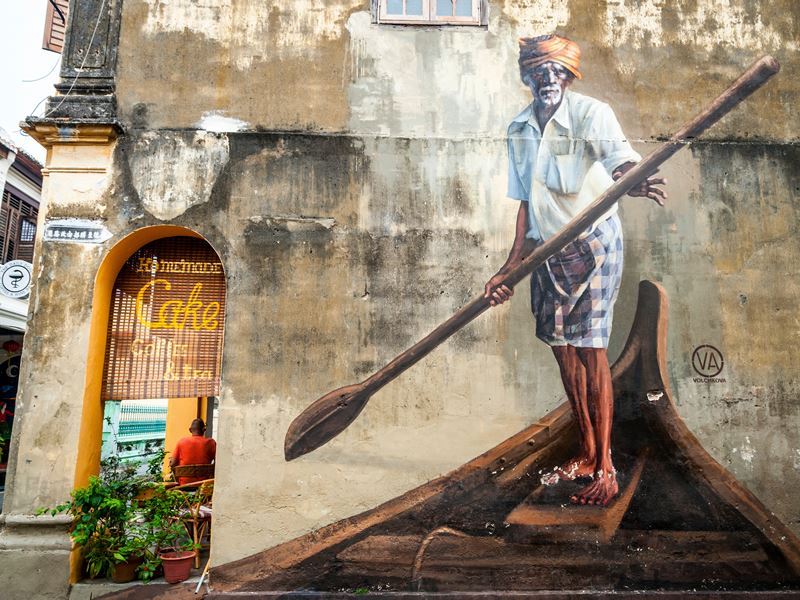 A massive limestone outcrop located just eight miles north of Kuala Lumpur, the Batu Caves is a Malaysian national treasure complete with sacred Hindu temples, a series of three incredible caves (plus several smaller ones), and a wildlife-conservation zone. Most visiting this photogenic UNESCO World Heritage Site are wowed by the 140-foot-high gold statue of Lord Murugan who guards the entrance, but there’s plenty of other artworks, shrines, and ornate depictions of Hindu legends to grab your attention. Most eye-popping is the 272-step staircase leading up to the Temple Cave; not least for its new rainbow-hued makeover in a bid to boost tourism (this rather controversial act was not approved by the National Heritage Department and there are concerns about the temple being de-listed from National Heritage status). In spite of this, images of the “impromptu” transformation went viral and the results look nothing short of psychedelic.

Get the shot: When photographing Lord Murugan, be sure to stand far back so that you can get the entire statue (plus the stairs and mountain) in shot. Also visit the Dark Cave for its dramatic stalactites and up to 10 species of bat (45-minute guided tours run throughout the day).

The only place in Malaysia with a gambling license, the Genting Highlands (also known as the City of Entertainment) is a vast hilltop complex complete with Vegas-style casinos, gleaming shopping malls, upbeat bars and restaurants, and colossal theme parks. Another of its star attractions are the two cable systems (the original Genting Skyway and the recently-opened Awana Skyway) that provide wide-eyed shutterbugs with breathtaking views as they skim over the 120-million-year-old tropical rainforest and the Titiwangsa Mountains (on a clear day you can see all the way across to Kuala Lumpur). The latter is now the primary line for the 620-metre-ascent, beginning at Awana Station and ending at the summit’s SkyAvenue Station. With a top speed of six-metres-per-second, the 2.8-kilomtre ride takes 10 minutes in 99 standard gondolas and 10 glass-bottomed gondolas that can seat 10 and six passengers respectively.

Get the shot: If dangling over the rainforest from dizzying heights doesn’t take your fancy, join one of the jungle trekking tours to photograph the lush greenery and get up-close shots of unique insects, colourful birds, brilliant flora and fauna, and spectacular streams and waterfalls. 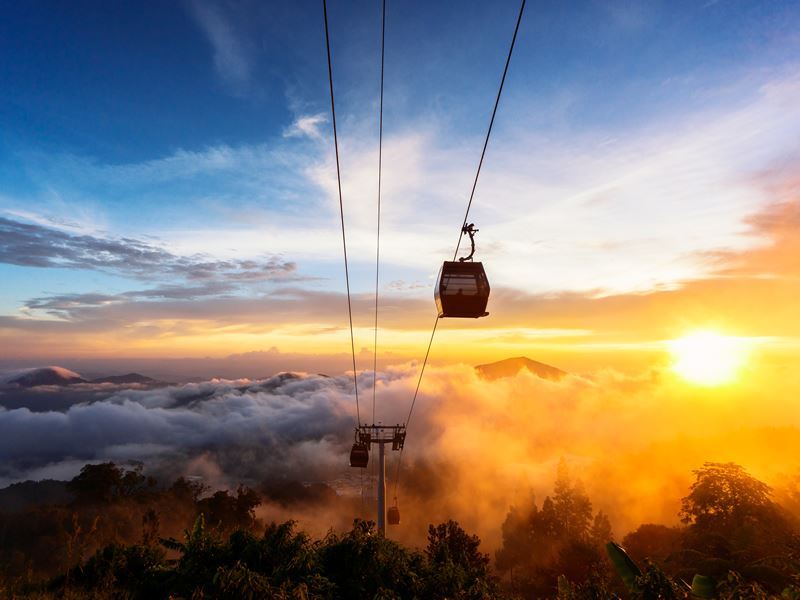 Probably Ipoh’s best-kept secret, Tasik Cermin (translating as Mirror Lake) is the glistening watery wonder surrounded by clusters of limestone hills. Gloriously hidden from view, the off-the-beaten-track setting is unique; it doesn’t feature on the map, there’s virtually no signage, and you’ll have to walk through a quarry and a man-made tunnel to reach it. However, those lucky (or clever) enough to work out the precise location from one of the quarry workers can expect a fairytale-like setting is guaranteed to take your breath away. The vibe here is resolutely peaceful and there’s little more to do than take pictures from a small platform overlooking the waters. For the most part, this place is a well-kept secret only shared by word-of-mouth. And since the tranquillity of the lake gives no indication to its actual depth, swimming is not recommended.

Get the shot: Aim to visit in the early morning or early evening (avoid the blazing sun if possible) and bring a tripod to avoid spoiling your shots with a wonky horizon. Also consider changing your image from colour to black and white to give your images a more artistic feel. 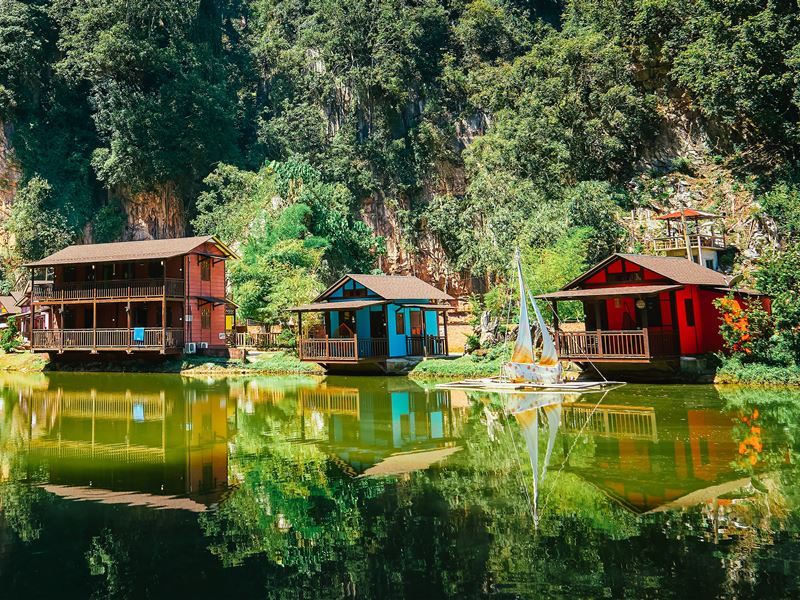 One of the most bizarre-looking karst formations in the world, the Pinnacles of Gunung Mulu are the razor-sharp rock spires that tower over Borneo’s dense forested landscape like jagged knife blades (some reach up to 100-metres-high). Set deep interior of the UNESCO-listed Gunung Mulu National Park, getting here requires some effort; mostly an intense three-day- two-night trek that will test both your fitness levels and nerves (the Pinnacles themselves are only visible from the top of the mountain and the climb is so technically challenging that it’s sometimes used by the Malaysian Army for training purposes). For dedicated daredevils who can cope with unrelenting heat and humidity, the payoff is spectacular. For those who don’t make it to the lookout, the remainder of the park rewards with a mixture of sandstone peaks, interesting wildlife (including approximately two million bats), and some of the biggest caves in the world.

Get the shot: There’s a tricky vertical rock face where ropes and ladders aid climbers up the last leg to the peak. Once you’ve reached the small viewpoint overlooking the Pinnacles, the only thing you’ll need to worry about is how to stop the high humidity fogging up your camera lens. 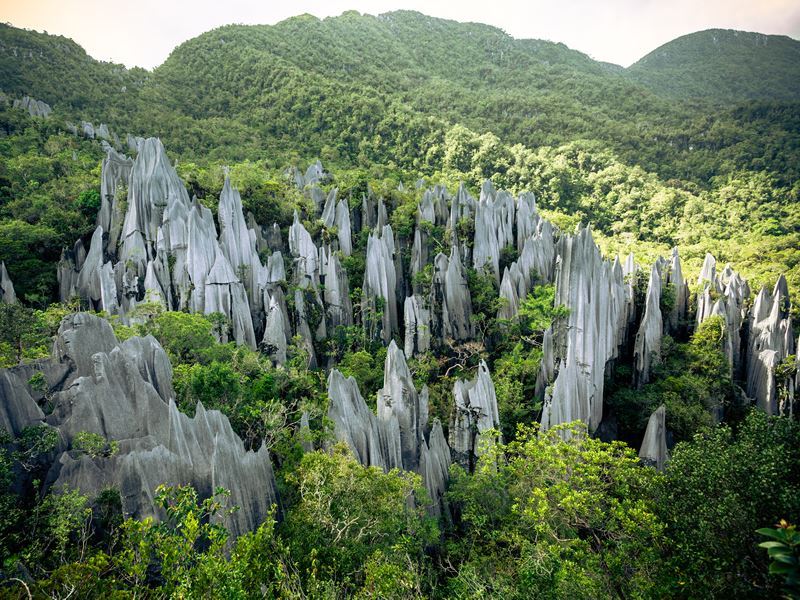 It’s always time for tea in the Cameron Highlands, Malaysia's largest hill-station area most famous for its collection of peaceful townships, serene mountains, strawberry farms, and emerald-green tea plantations located at 1,500-metres above sea level. Discovered in 1885 by English surveyor William Cameron and developed some 40 years later by colonial explorer Sir George Maxwell, this tea-growing landscape offers plenty of photo ops. Most visit-worthy is the BOH (Best of Highlands) Tea Plantation and Factory - the largest black tea plantation in south Asia founded by English businessman J.A. Russell in 1929. Supplying a staggering 70 per cent of all the tea in Malaysia (the company produces four-million kilograms annually), it delights with postcard-perfect views of the tea estates as well as a colonial-era tea processing factory (open to the public), a shopping gallery, and an open-air cafe serving light snacks and jolly good brews.

Get the shot: While photography in the factory is prohibited, you can knock yourself out with endless exterior shots. Use an ultra-wide lens to capture the deep-green carpets under a bright blue sky and be sure to ask permission from tea-pickers prior to taking their photograph. 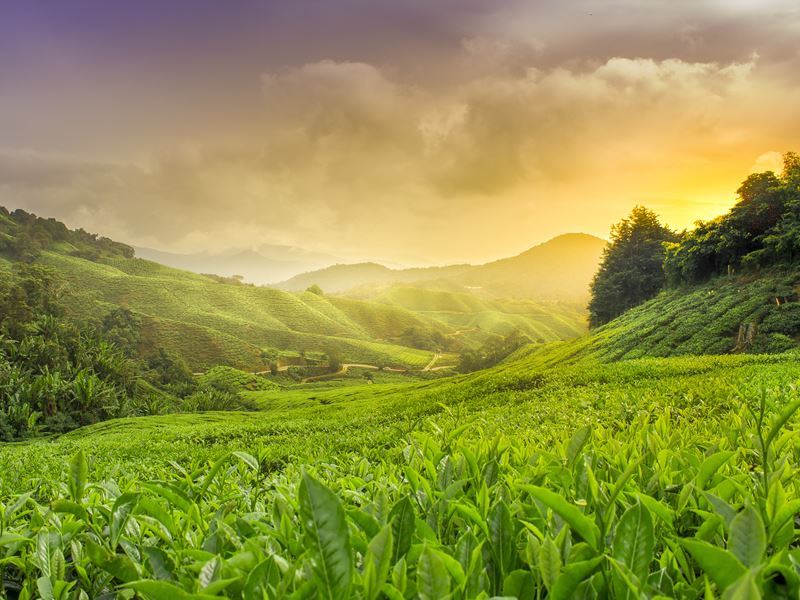 The pair of Perhentian Islands

Located off the coast of northeastern Malaysia, approximately 40 miles south of the Thai border, the Perhentian Islands (meaning stopping point) are a small cluster of coral-fringed islands complete with crystal-clear waters, excellent hiking trails, and isolated palm-fringed beaches with glittering white sands. While the two main islands - Pulau Besar (Big Island) and Pulau Kecil (Small Island) - appeal to different crowds (the former is more expensive and exclusive), both attract travellers keen to live out their Robinson Crusoe fantasies in a slice of paradise that remains gloriously uncrowded. For photographers, must-dos include heading to Turtle Sanctuary Beach at night to see these adorable creatures laying their eggs or making their way to the sea, trekking across the forest to spot birds and monkeys, and floating down to the ocean floor to marvel at marine life such as clownfish, big blue-spotted rays, and black-tipped reef sharks.

Get the shot: The sparkling waters backed by soft white-sand beaches and flanked by jungle- covered hills are worth the visit alone. For those staying in the lesser-known state of Terengganu, the Perhentian Islands are only a 90-minute by ferry ride from Kuala Besut. 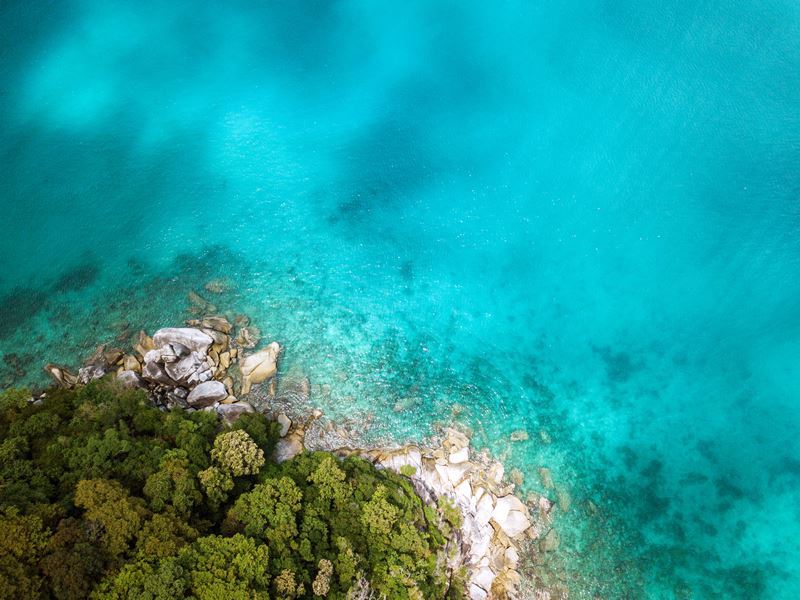 In addition to its luxuriant and biologically diverse rainforests, Borneo is home to half of the world’s known plant and animal species; around 222 mammals (including 44 endemic), 420 birds (37 endemic), 100 amphibians, and 394 fish (19 endemic). It’s also where you’ll find auburn-haired orangutuns, although sadly this is less and less likely to happen in the wild (they are currently classified on the International Union for Conservation of Nature’s Red List as an endangered species). Further not-to-be-missed wildlife hotspots include the Klias Wetlands for crocodiles, long-tailed macaques, monitor lizards, and the bizarre-looking proboscis monkeys and the Kinabatangan River for Borneo pygmy elephants and over 200 species of bird. Also try to factor in a visit to Kinabalu National Park for magnificent views of the 4,095-metre-high Mount Kinabalu - the highest mountain between the Himalayas and New Guinea. 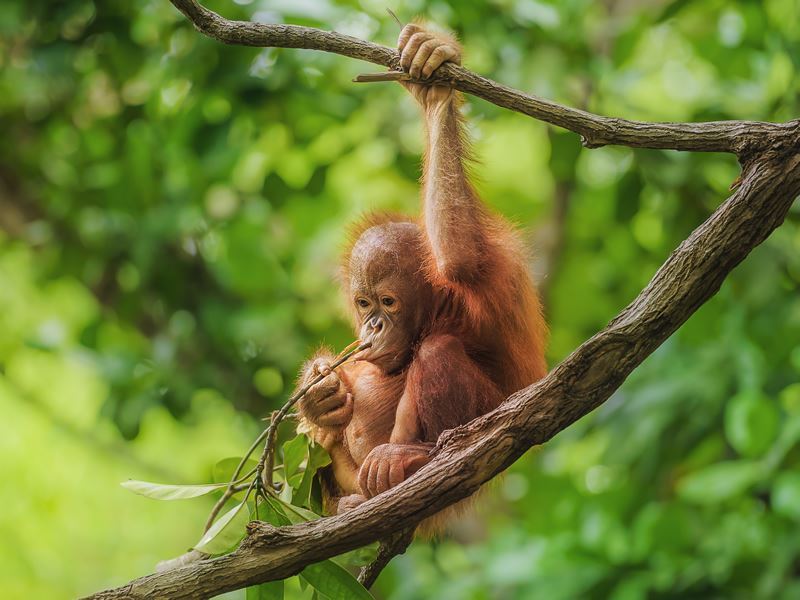 Discover fascinating Malaysia with these recommended holidays and tours