Stargazing in the Atacama Desert

The Atacama in northern Chile is an expanse of desert believed to be the driest on the planet. Its landscape and environment have been compared to Mars and there is definitely something other-worldly about this place. So it is quite apt that it happens to be one of the best places to gaze out upon other planets, stars and galaxies. It is the high altitude, minimal light pollution, as well as its clear skies, that make the heavens of the Atacama so incredible. 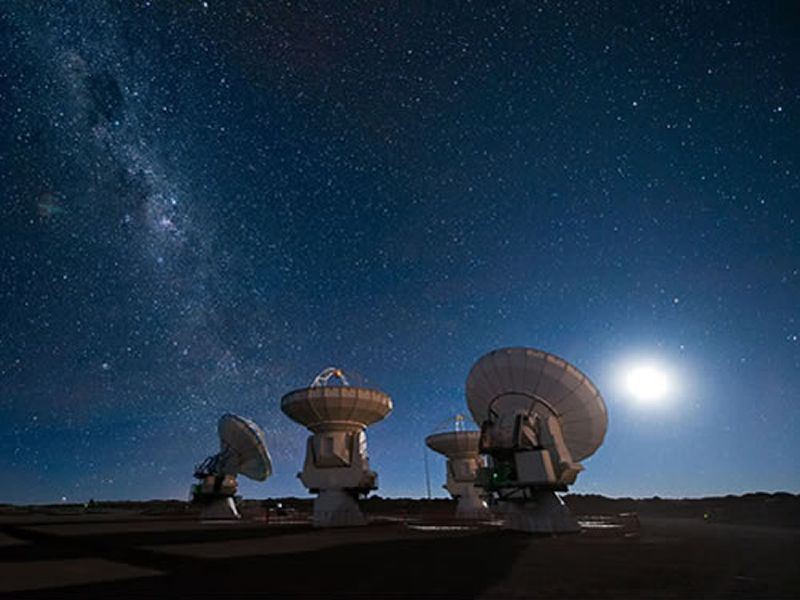 You can be anywhere in the desert at night to witness it. You will probably never have seen so many stars. With just the naked eye there is enough to keep you mesmerised for all eternity. But for astronomical enthusiasts who want a closer and more informed exploration of the universe as seen from the Atacama there are some wonderful nocturnal excursions, particularly near the charming desert town of San Pedro de Atacama.

San Pedro is a small and rustic little oasis town seemingly banished from civilisation out in the barren desert with nothing bar the range of snowy mountains and a volcano presiding over it in the distance. It is rather a mecca for tourists and backpackers as a gateway to the Bolivian altiplano and for the many attractions that the Atacama has on offer besides gazing at the cosmos. Crammed with many many tourist agencies offering a variety of tours, there is actually a lot to see and do out here.

One of the best of which, is a night-time visit to nearby San Pedro de Atacama Celestial Explorations (SPACE) open-air observatory, one of the best in South America. If you arrange a visit bear in mind that tours do not operate during the 6 days surrounding the full moon because the moon effects visibility. Also consider that it is dependent on cloud cover, not to mention the fact that it is an extremely popular activity. Demand is high. But that is for a reason.

A three hour tour of the observatory is conducted in either French, Spanish or English and often by founder Alain Maury, who as a highly experienced astronomer, will enlighten you with his wisdom and entertain you with his wit. Equipped with a laser beam pointer he navigated us through the dazzling night-scape to point out constellations, star signs and stars such as The Southern Cross, the Big Dipper and Alpha Centauri, bringing that mass of lights into clearer focus.

Then for a closer look…

SPACE has the largest park of telescopes in any South American observatory. It looks like an astronomer’s playground. Large telescopes are set up at various angles around the park to focus upon different points in the night sky.  Following the introductions, we took it in turns to peer through each of the huge lenses. It really is very exciting. I was astounded to be able to see Saturn and its rings. We were also directed to what seemed to be one star near to the Southern Cross but through the telescope was suddenly revealed to be a colourful cluster appropriately named The Jewel Box. I was spellbound by the orange, blue and purple colours. And finally after we had danced around the rest of the park jostling to view all these wonders, we got to see the moon. You can actually see the texture and craters of the surface. By the end my mind was boggling from what I had seen and from trying to compute the inconceivable distances and sizes of what was right before us. I didn’t want to tear my eyes away.

I was eventually lured away by the prospect of a cup of hot chocolate and a Q&A session inside. This was greatly appreciated. In the blistering heat of the day it is hard to imagine that at night it can get so cold here in the desert. It gets extremely cold.

So if you get the chance to stargaze in the Atacama desert you are in for an astronomical treat, but wrap up warm!