One of the last true wilderness destinations, Antarctica offers the rare opportunity to experience a thrill similar to what early explorers felt when attempting to conquer the continent. You’ll witness this remarkable, nearly untouched land with its massive blue-tinged icebergs, soaring mountains and icy landscape that creates a striking contrast against the deep blue sky, stretching as far as the eye can see.

An expedition cruise here is sure to humble even the most seasoned travellers, leaving all in awe of such a surreal slice of our planet. Wildlife is abundant in this place where you’re likely to witness minke and humpback whales swimming by, fur seals floating on the ice and beaches dotted with elephant seals, along with the famous nesting colonies of penguins.

The journey all begins on the southernmost tip of South America, sometimes referred to as the ‘End of the World,’ before boarding the Great Mortimer, sailing through legendary Drake’s Passage, the South Shetland Islands and the Antarctic Peninsula. 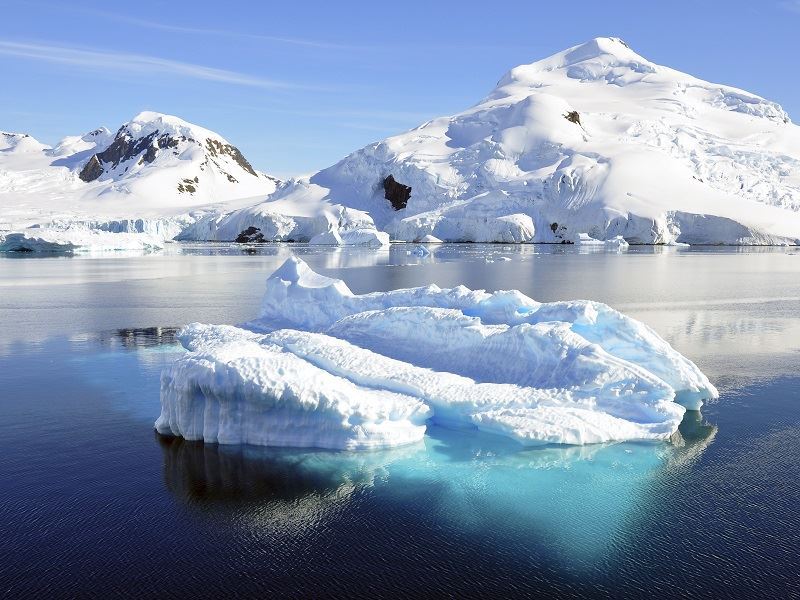 Close encounters with wildlife and the icy landscape

While big cruise ships can provide a good overview of this incredible white continent, if there are more than 500 guests aboard, you won’t be able to go ashore. Aboard the new state-of-the-art Greg Mortimer, which has a maximum capacity of 100 passengers, you’ll enjoy a true Antarctic one-of-a-lifetime experience: the chance to walk among the ice, perhaps among penguin rookeries and seal haul-outs while surrounded by ice cliffs. 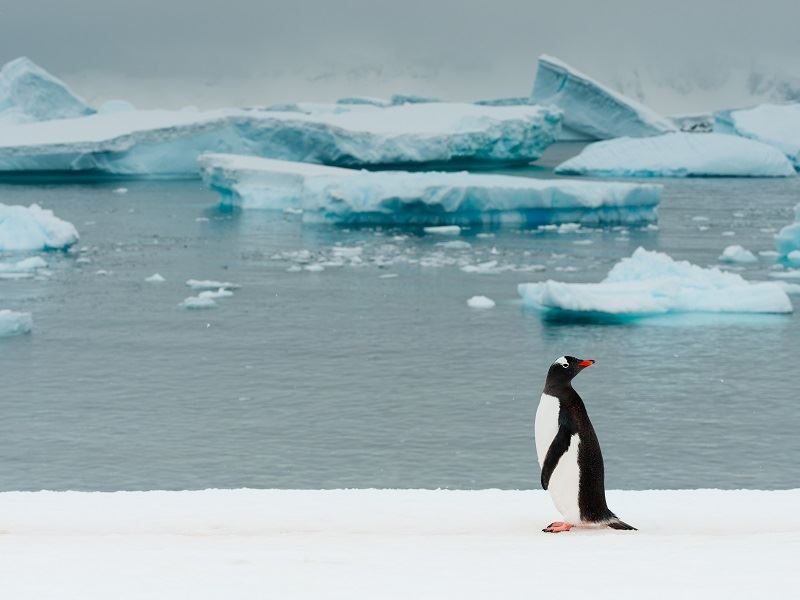 While small enough to make landings, the Greg Mortimer is large enough to contend with adverse weather conditions, including the strongest winds and waves while providing comforts that make the adventure more enjoyable. It features viewing platforms that offer unobstructed views of the landscape, seabirds and marine life, along with 15 Zodiacs allowing for landings and closer encounters. Passengers can take advantage of activities like kayaking, ski touring and climbing and then come back to relax in a comfy cabin with plenty of storage and all the necessary amenities. The majority of cabins come with private balconies for breathing in that fresh salty sea air while taking in the unforgettable views.

Dining and onboard entertainment

While you won’t find any Broadway shows on this adventure cruise ship, passengers can listen to fascinating presentations about the region, its history, biology, culture, climate change and more by the experts, or indulge in a massage at the Wellness Centre which includes a spa, sauna and gym equipment. There are a variety of menu options and courses for fueling the days’ activities and feeding hungry appetites afterward, along with 24-hour complimentary snacks, tea and coffee. A selection of soft drinks, beer and house wine is provided at dinner. 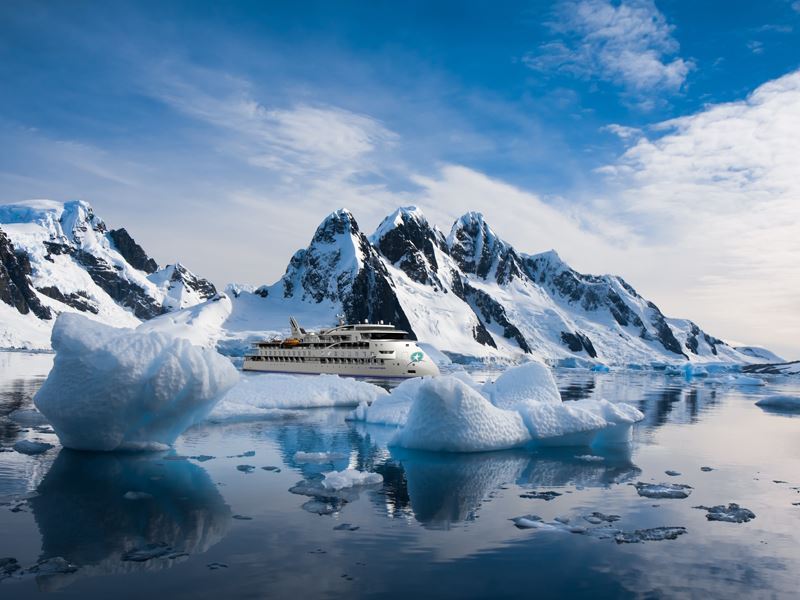 Ushuaia. The world’s southernmost city is the capital of the Tierra del Fuego archipelago in Patagonia, Argentina. Set along the bay of the province’s largest island, the only thing south of Ushuaia is Antarctica, just over 620 miles away. Visitors are awed by the majestic scenery, with the town set atop a steep hill, while the snow-capped Andes can be seen in the north and the Beagle Channel in the south. The sun rises early here in the summer, with its rays shining on the jagged peaks of the glaciers that loom over the town, sharply leading into the bay that faces the Arctic.

While it’s all about the scenery, nature and wildlife here, the town itself is worth exploring. There are a number of historical homes of the first settlers here and buildings, like the 1894 Government House, the original residence of the governor, now a National Historical Monument opened to visitors who can get a glimpse of the province’s political history. The Museo del Fin del Mundo (End of the World Museum), showcases an impressive collection of artefacts from indigenous people who inhabited the region which spans over 8,000 years of history, including flints and harpoons along with replica wickerwork and Yamana canoes. Pieces from the first exhibitions can be viewed as well like the figurehead of the Duchess of Albany, an English ship that wrecked in the area in 1893.

Museo Maritimo is made up of four museums with sit within a former prison complex. Visitors can explore the Marine Art Museum, Antarctic Museum and Maritime Museum as well as the Prison Museum, its most popular attraction. The city was originally developed as a penal colony for the country’s re-offenders, with many prisoners shipped here from Buenos Aires in the early 20th-century. Part of the prison is still intact, providing interesting, if sobering, insight into some of the most infamous prisoners and their punishments, as well as to experience what it might have been like to be held in the unheated cells. 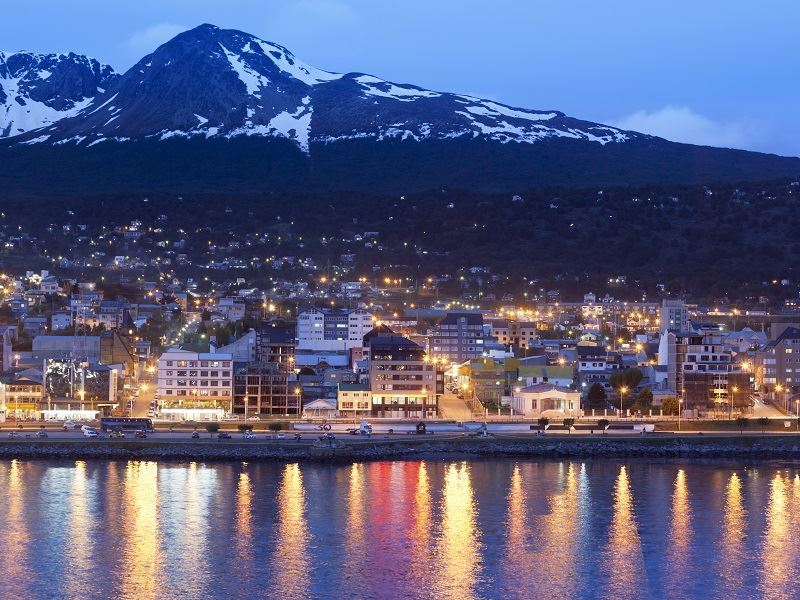 This approximately 600-mile-wide waterway marks the convergence of the Pacific, Atlantic and Southern Oceans, dividing the sub-polar conditions of the southernmost parts of South America from Antarctica’s frigid polar regions. This was what the Greg Mortimer was designed for navigating, with its upside-down X-Bow design that helps smooth the ship’s passage through choppy waters. There will be lots of excitement in the air, with passengers marvelling at the swells and the first icebergs that come into view, crossing the Antarctic Convergence with temperatures noticeably dropping. There are many breath-taking sights that can be witnessed, from the array of seabirds like huge petrels and elusive albatross to several whale species, some of which may fully breach from the sea. As you travel below the Convergence, you’ll be surrounded by massive, glistening bergs, each one looking like a stunning work of art, which means you’ll want to have plenty of space available for capturing photos, and ideally an extra memory card. 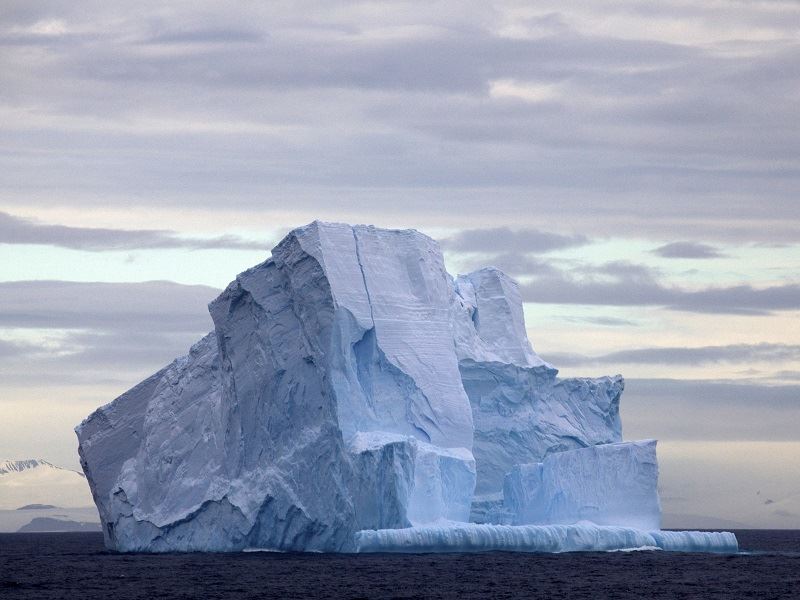 The South Shetland Islands are a string of islands that run parallel to the north-west coast of the Antarctic peninsula and are almost entirely covered with ice. Typically, just 2 to 3 percent of the land is free of ice, generally along the shoreline, which is where life can be found, from human inhabitants at the bases, to seals, Adelie and chinstrap penguins, blue-eyed shags and Antarctic terns. The largest of these islands is King George, the least isolated area of the continent as a dozen different countries have a base here. With over 90% of the 500-square-mile island glaciated, the bases are squeezed into a small area.

This is an exciting time – if weather conditions permit, it may be the first day you’ll get to step foot on land. 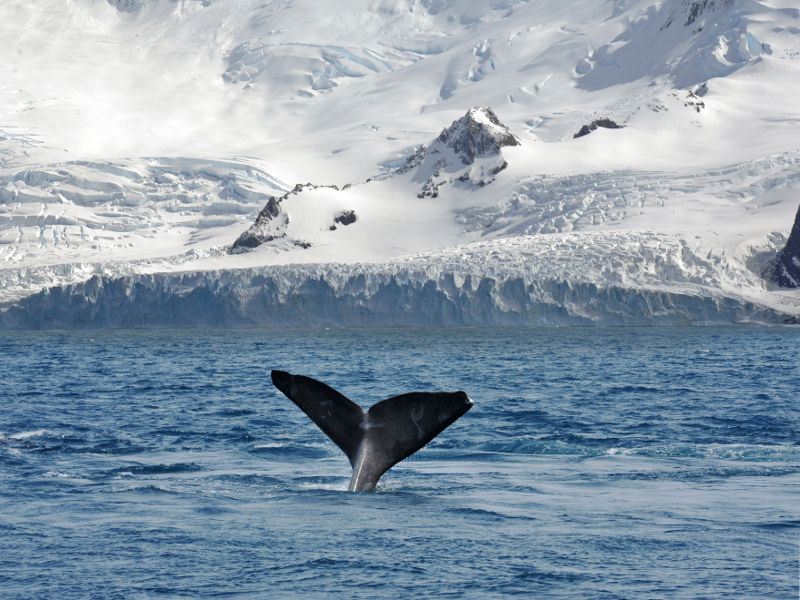 After sailing through the Gerlache Strait, a wonderland of epic proportions awaits to be discovered on the spectacular Antarctic Peninsula. Itineraries are based on weather and ice conditions, but typically the ship cruises along the western side of the shoreline and brings opportunities for Zodiac excursions. These specially designed vessels carry small groups of passengers to land, with their low centre of gravity and stability making it easier to navigate the water in a wide range of conditions. They allow for more spontaneous landings too - like those times the crew spot an especially wondrous ice formation, or wildlife like fluffy little penguin chicks. These trips allow passengers to step ashore, exploring the seal haul-outs, the place the animals come to rest or reproduce, as well as to explore historic huts and penguin rookeries. The penguin highways are likely to be busy with traffic, with parents waddling about in search of food to fatten their chicks. The expert team will make the most of each day here and you might even have the chance to camp out on the ice under the Midnight Sun if weather allows, getting a more comfortable look at what early Antarctic explorers like Ernest Shackleton experienced.

While on the Zodiacs, you’ll glide through gorgeous protected bays surrounded by majestic peaks and endless glaciers, areas that are havens for seals and whales like orcas, humpbacks and minkes. If ice conditions allow, back on the Greg Mortimer, passengers can stand on the observation deck while the ship sails along the narrow Lemaire Channel, often one of the highlights of the adventure. The towering cliffs rise nearly 2,300 feet out of the sea on either side of the vessel, and oftentimes the water is so still that they’re reflected on the mirror-like surface – the reason that the channel is frequently referred to as ‘Kodak Alley.’ You may even be able to send a post card home from the world’s southernmost post office, the Penguin Post Office. 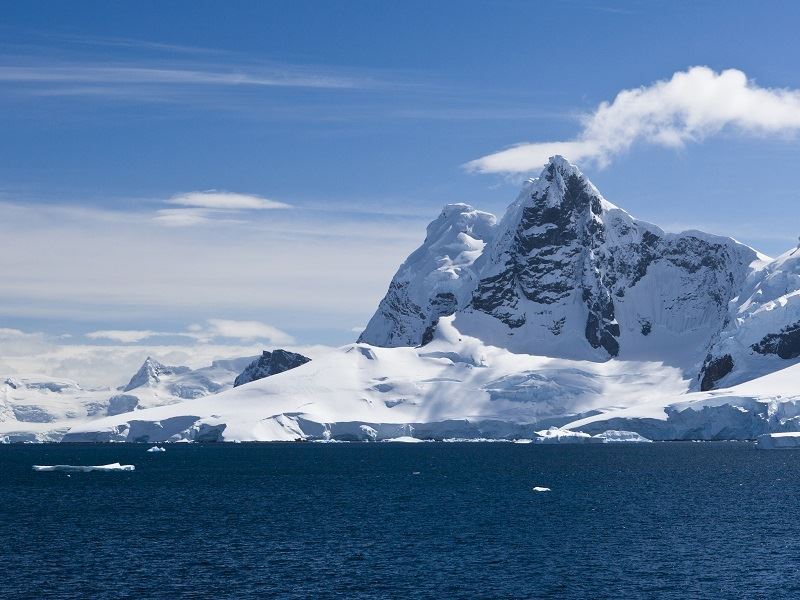 After leaving the magic of the Antarctic Peninsula, the ship makes its way back north across the Antarctic Convergence and Drake Passage, bringing more opportunities to watch for seabirds and learn more about the mesmerizing sights experienced through entertaining talks. Passengers enjoy time for exchanging stories and photos with fellow passengers, some of whom have now become new friends.

With a little luck, the captain may be able to make a ceremonial round of Cape Horn, situated on the extreme southern tip of Chile, something that’s considered by some to be the ‘Mount Everest’ of sailing. Passengers can earn nautical bragging rights as the vessel may battle through some formidable waves, with the reward: gazing at the rocky point which as witnessed centuries of sailing tragedies, and triumphs.

The Beagle Channel and Journey’s End

The ship cruises through the Beagle Channel, as it makes its way to the dock in Ushuaia. The 150-mile-long channel separates the Tierra del Fuego archipelago from a series of smaller islands and is known for the dramatic visual impact it provides those who sail through, around the very south of Patagonia and its dramatic landscape of glaciers and mountains. Plenty of wildlife is typically viewed from the ship, just like Charlest Darwin once experienced, including common sightings of various birds and sea lions, and, with a little luck, dolphins and perhaps even whales. 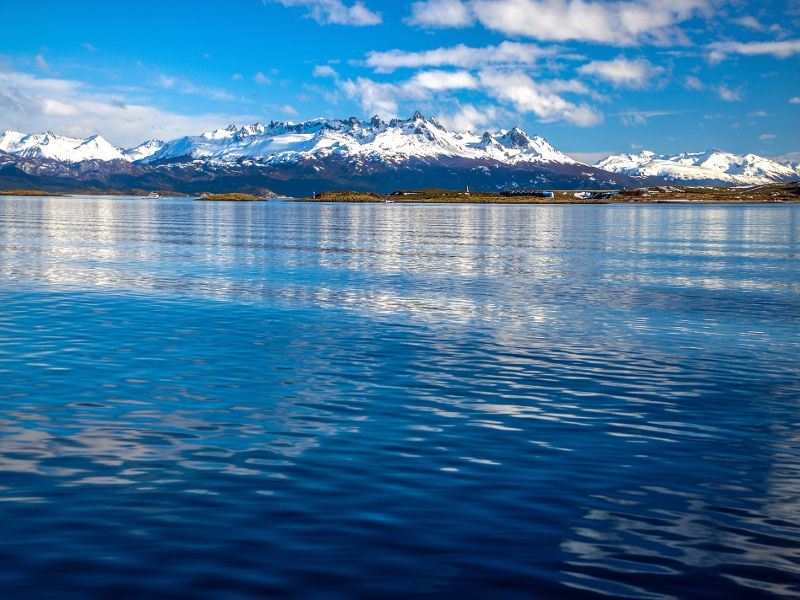