A first-timer's guide to holidaying in St Kitts and Nevis

This pair of laid-back tropical islands in the northern Leewards of the Caribbean, provide all the staples you need for an unforgettable holiday in the Caribbean, from beautiful relaxed beaches and clear warm waters for swimming, to lush rainforest, magnificent plantation houses, delectable cuisine and just about everything in between. 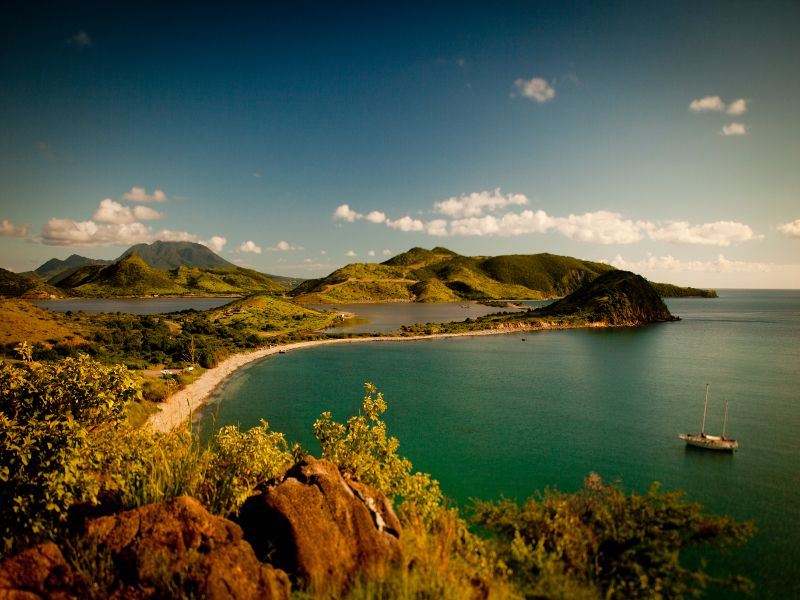 When to go to St Kitts and Nevis

This island nation experiences balmy temperatures year-round with average highs around 28 Celsius and a low chance of precipitation during any given month, which means the best time to go depends on the type of experience you’re looking for. During the holidays, rates are at their highest and so are the crowds, but it’s a happening time to be here with the island in full swing. This is when Carnival is celebrated, with events beginning in late November and ending with the Grand Parade in January, featuring plenty of pageants, parades and calypso shows. While that’s the peak time for visitors, the busy season runs through April. As June through mid-November is hurricane season, with the risk highest in September and October, this is when room rates drop significantly, and crowds are few, but you’ll need to keep a close eye on the weather. If a hurricane is on the way, it won’t appear unannounced and you’ll usually have plenty of time to leave the island.

Our pick for the very best time to go is either in May followed by November, when you can enjoy some discounted rates, avoid the peak crowds and a relatively low risk of major storms.

Weather in St Kitts and Nevis

Temperatures on St. Kitts & Nevis, as mentioned, stay about the same throughout the year, with average highs of around 28 Celsius every day, although summers are more humid. More dry, mild weather is typically experienced November through April, while May through October is hotter and rainier, though it’s still relatively dry, with showers coming and going quickly. The hurricane season is officially between June and November, with September and October bringing the highest risk.

British Airways flies from London Gatwick Airport to Robert L. Bradshaw International Airport on St. Kitts. Departures are twice a week, on Wednesdays and Saturdays, and while there is a stop in Antigua on the ongoing and outgoing journey, you won’t have to leave the plane. Total flight time is about 10 hours and 15 minutes.

If you’re hoping to visit other islands while you’re in St. Kitts & Nevis, be aware that ferry service is only available between the two islands, and while you can fly from St. Kitts to some other islands, typically the steep fares and limited schedules make it rather difficult.

British passport holders don’t need a visa for visiting St. Kitts and Nevis, however, passports do need to be valid for at least six months from the date of entry into the country. When entering, you’ll be given a specific time frame to stay; if you wish to stay longer than that period, you’ll need to visit the St. Kitts and Nevis Immigration Department for an extension.

English is the official language of St. Kitts & Nevis, however you’re likely to hear locals speak Creole which is based on English, with roots in African, standard English, Scottish and Spanish.

Driving: Rentals cars are available on both islands, although they aren’t found at the airports and you’ll need to obtain a temporary permit to do so. As fees are steep and you’re unlikely to need a car every day, you may want to consider a mix of different transportation options. If you hope to do some island hopping, there are some agencies that will allow you to rent on St. Kitts and return in Nevis, or vice versa, but require a minimum of a three-day rental.  Driving is on the left, and while the roads are typically quiet, you will need to watch out for potholes, children and goats.

Taxis: Taxis are generally the best way to get around either St. Kitts or Nevis. Fares are fixed rather than metered, regulated by the government, but you’ll still want to get a quote before hopping in the cab. Drivers also serve as tour guides for an additional fee. Be sure to clarify whether the rate is in Eastern Caribbean or U.S. dollars.
Bus: Many locals get around using the islands’ inexpensive minibuses, but as they don’t run at night, serve beaches in the southeast, and don’t always stop at popular tourist attractions, they usually aren’t that useful to visitors.

Ferry: Getting between the islands of St. Kitts and Nevis is managed by ferry, with service offered by multiple companies. Departures are from Charlestown on Nevis and Basseterre on St. Kitts. 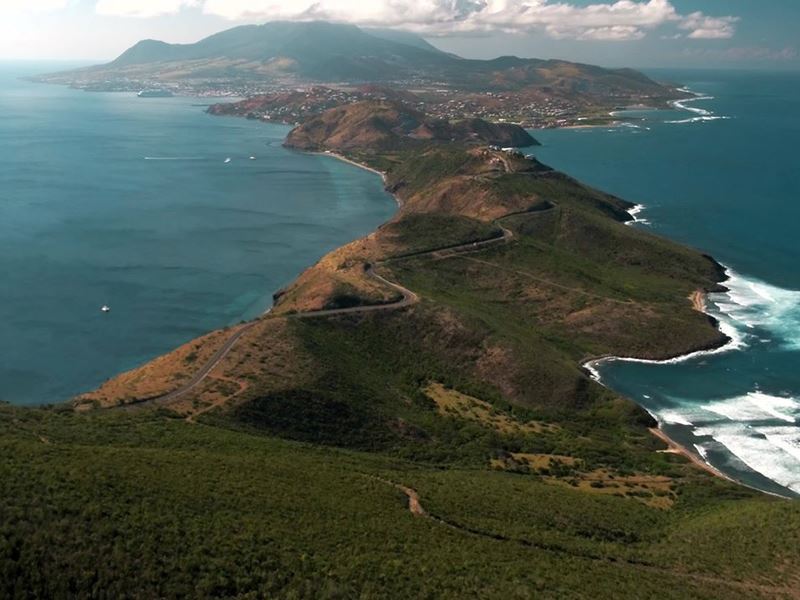 The official local currency is the Eastern Caribbean dollar, but prices are often quoted in U.S. dollars so it’s important to determine which when talking costs. Banks throughout both islands will gladly exchange currencies, though it’s usually best to obtain cash from ATMs, which are readily available on both St. Kitts and Nevis. Credit cards are also widely accepted.

Electricity generally runs on 230 Volts AC, however, many hotels on the islands function on 110 to 117 volts, so you may need an adapter. Check with your particular property to determine whether or not that’s the case.

Most British travellers to St. Kitts and Nevis will not need immunisations, but for those coming from a country with high rates of yellow fever, a yellow fever vaccination is required. Vaccinations against tuberculosis and hepatitis B are sometimes recommended; speak with your healthcare provider for advice.

St. Kitts and Nevis is a country that’s considered safe to travel to, with crime rare on Nevis. The relatively small amount of crime that occurs is petty theft and robberies on St. Kitts, particularly at Conaree Beach. Use common sense and keep your valuables protected and avoid walking around alone after dark or in deserted areas. The biggest safety risk is dehydration and heat stroke, so be sure to pack sun protection, including sunscreen, sunglasses and a wide-brimmed hat, and drink plenty of water throughout your holiday.

Carnival is the biggest celebration of the year on St. Kitts, held over the Christmas and New Year’s holidays featuring lots of music and colourful parades, street fairs and masquerades. The next biggest event is the week-long Culturama in July, which brings beauty pageants, street fairs, live music and jump-ups in honour of the emancipation of slaves in the country. The St. Kitts Music Festival is hosted annually in June, featuring all Caribbean genres of music like calypso, reggae and soca.

While locals are friendly and welcoming, the culture is rather conservative, so be sure to keep that in mind. It’s a sign of disrespect to wear beach attire in the city; it should be confined to poolside or the beach. Local public swearing is also not acceptable, in fact, you can even be fined for it. Also, be aware that discrimination of lesbians and gays, though rare, can occur. Male homosexual activity is officially punishable with up to 10 years of imprisonment; however, the law isn’t enforced. Still, it’s best not to engage in public displays of affection, particularly outside of hotels and resorts.

St. Kitts and Nevis have rich volcanic soil and fertile coastlines that result in more plentiful, and especially tasty, fruits and vegetables compared to what you’d find on most other Caribbean islands. Nearly all dishes are paired with the abundant, fresh produce. With such a fantastic food scene, it can be difficult to decide what to eat, but fish is almost always a good choice, with the fresh catch of the day likely just brought in – think snapper, cod, mahi-mahi, wahoo, conch and lobster. Be sure to sample local delights like goat stew, rikkita beef and roast pig as well. The national dish is made up of four different dishes: seasoned breadfruit, coconut dumplings, spicy plantains and stewed saltfish, which perfectly complement each other.

Tasty cuisine can be enjoyed in all types of eateries here, from tiny, laid-back beach shacks to high-end fine dining. Sprat Net in Old Road is owned by a pair of fishermen and serves inexpensive grilled lobster and super-fresh fresh with the menu featuring whatever has come in that day, while El Fredo’s in Basseterre is a locals’ favourite near the waterfront offering traditional island fare in an authentic setting. The Spice Mill Restaurant at Cockleshell Beach is a fabulous open-air restaurant that offers upscale dining on the sand and beautiful views of Nevis, especially after dark when you can see the lights sparkling across the water.

The local (non-alcoholic) drinks are typically fresh-squeezed fruit juices made using the bounty of local produce. Fairling is the popular local fruit punch. The local soft drink is Ting, a refreshing grapefruit soda. As it is throughout the Caribbean, rum is the alcoholic drink of choice. The locals’ beer is the locally-brewed Carib which is produced just outside of Basseterre.

When it comes to nightlife, St. Kitts tends to have the most action-packed experiences after dark, especially in the Frigate Bay area, but you’ll find plenty to do on Nevis as well. Many hotels and resorts offer entertainment like nightclubs and bars, as well as dance shows and theatrical performances. Mr. X Shiggidy Shack is especially popular, hosting Thursday night bonfires, dance parties on Friday nights and karaoke on Saturday nights. If you want to mingle with the locals, plan to go on a Friday night. Club Kactus is set within a lighthouse just outside Basseterre and is also a popular locals hangout. On the weekends, you’ll often catch Jamaican bands performing live.

Discounts are included in the prices shown.
7 nights From €2,149 pp
More Details