Find out more
Holidays in Mexico

Experience the magic of Essence at the Fives Beach, Mexico

A luxurious holiday experience and incredible savings of up to €950pp and more!

Although many of us consider ourselves to be familiar with Mexican cuisine, the food served up in many Mexican restaurants throughout Europe doesn’t even come close to what the locals cook and eat in Mexico. So forget about bland blobs of refried beans, burnt tasteless cheese and flour tortillas from a packet and get ready to embark on a true taste of Mexico. 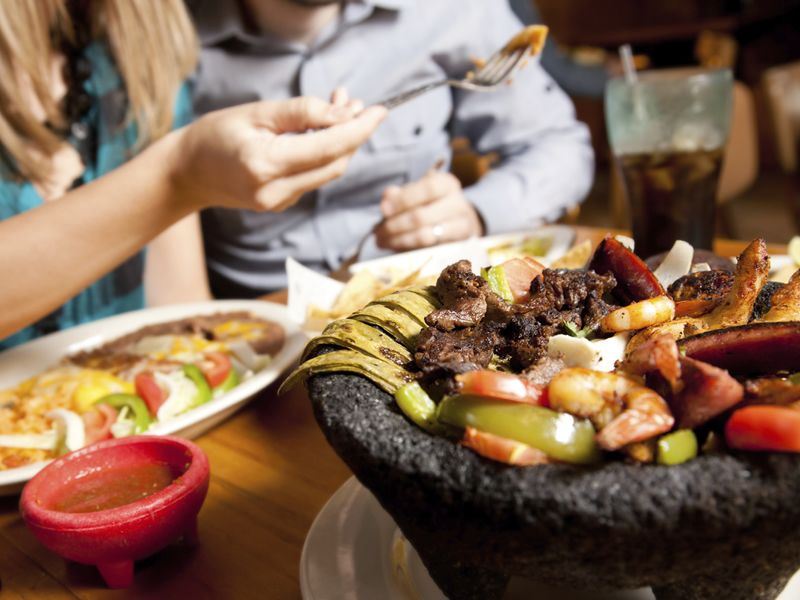 History of Mexican food
Mexican food is a fusion of indigenous Mesoamerican and European cuisines. This style of food first came about following the Spanish conquest of the Aztec Empire in the 16th century, when the conquistadores introduced a number of ingredients and cooking methods which were new to the locals. At that time, the basic staples included corn, beans, chilli and peppers – ingredients which are still commonly used today – but these were expanded to include meat such as beef, pork, chicken, goat and cheese, as well as various herbs and spices.

The Spanish tried their hardest to impose their own diet on the country but they were unsuccessful, which led to the two cuisines becoming mixed. Over the centuries, this created various regional dishes which have become closely tied to Mexican culture – so much so that UNESCO added Mexican food to its list of the world’s Intangible Cultural Heritage of Humanity.

Starters
Ceviche is a seafood starter popular all over Central and South America. It’s traditionally made from raw fish marinated in citrus juices and seasoned with chilli peppers, onions, salt and pepper. Ceviche is usually accompanied by a small vegetable or salad garish such as avocado, corn, plantain, lettuce or sweet potato. When the dish was created, the raw fish was traditionally left for up to three hours to marinate, although today the only marinating period is usually the time it takes to get from the kitchen to your table.

Guacamole is another well-loved Mexican appetiser which is usually served up on top of nachos alongside salsa and sour cream or sometimes as a side dish in a main course. It’s typically made by mashing very ripe avocados in a pestle and mortar together with salt before stirring in tomatoes, lime juice, garlic and coriander for extra flavour. This dish has been around since as early as the 16th century and has spread widely throughout the world.

Elote is the Mexican name for corn on the cob and it is best enjoyed when eaten in the street just after purchasing from a food cart. Much more than just a vegetable, this dish is incredibly popular with tourists and locals alike and is smothered in mayonnaise, fresh white cheese and chilli powder and drizzled with lime. It’s customary to either eat the elote on a stick or by grasping the husk which has been pulled down to form a handle – a knife and fork is out of the question. It’s wonderful as a starter, side dish or a light lunch all on its own.

A popular choice come lunchtime in Mexico, a gordita (little fatty, named so thanks to its round, bulging shape) is a small and thick cake made with corn flour, similar to a pasty in the UK. After it’s been oven-baked, deep-fried or dry-fried in a large pan, the gordita is cut in half and is stuffed with things like vegetables, cheese, meat and salsa. One of the most popular variations is the chicharrón de chile which is filled with a spicy pork stew.

Chilaquiles were invented by a woman who had a pile of leftover stale tortillas and didn’t want them to go to waste. She cut them up into pieces, covered them in whatever other leftovers were available and served them to her family for breakfast. Chilaquiles have come a long way since then and are now made of corn tortillas which are fried and then loaded with salsa, cheese, refried beans and sometimes eggs and shredded chicken.

Desserts
Pastel tres leches (three milk cake) is a popular way to end a meal all over Central and South America. This dessert is made of a sponge cake which is soaked in three kinds of milk: evaporated milk, condensed milk and heavy cream. Thanks to its unique texture, the cake doesn’t get soggy, despite being doused in all the liquids. Although the cake’s origin is disputed, the Nestlé company claims to have helped the recipe evolve during World War II.

Polvorones de canele, sometimes called ‘Mexican wedding cookies’, are bite-sized sweet biscuits which are dusted in powdered sugar. Although they’re served in many bakeries and often made at home, these biscuits are also used to create a traditional centre piece at weddings by stacking them high into a giant pyramid. Flavoured with cinnamon, polvorones de canele are usually served alongside a liqueur – aniseed is a popular favourite – or Mexican hot chocolate.

Churros are one of the most well-known Mexican desserts which have become popular all over the world. They’re found everywhere from locals’ homes and cafes to street vendors and fairs, testament to their popularity. Churros are made from long strips of pastry which are deep-fried before being rolled in cinnamon sugar. They’re often served alongside a thick chocolate sauce for dipping or sometimes you’ll find them stuffed with a chocolate spread or a caramel-like sauce called dulce de leche.

Drinks
Atole is a popular hot drink which is enjoyed at any time of the day, although it’s most appreciated during the winter months when it’s cold outside. It’s similar to a malt drink and is made with corn flour, water, cane or brown sugar, cinnamon and vanilla. Because atole has quite a mild taste on its own, it’s often flavoured with chocolate or pureed fruit. You’ll find it served up in cafes, bars, restaurants and even street vendors where it’s usually ladled out of a large simmering pot.

Agua fresca (fresh water) is a local favourite during the hot summer months in Mexico. This non-alcoholic drink is primarily made of water and sugar which is then flavoured with blended or squeezed fruits, cereals, flowers or seeds. Some of the most popular variations include watermelon, cucumber, chia seed and tamarind, although it’s normal to use whatever ingredients are in season. Despite being mainly sold by street vendors, agua fresca is also found in restaurants and is regularly made by locals at home.

Just like the caipirhina is to Brazil and the mojito is to Cuba, so is the michelada to Mexico. This traditional drink is akin to a bloody Mary and is made with beer, tomato juice, lime juice and chilli sauce to give it a kick. As with many things when it comes to food and drink in Mexico, there are loads of variations of the michelada, some of which incorporate Worcestershire sauce, soy sauce, jalapeños and garlic. A michelada is the ideal drink if you’re craving something refreshing and savoury which won’t put you under the table.

Mexican food in festivals
Mexican cuisine is strongly linked to the culture, which is why it plays a major role in many of the country’s festivals and celebrations. For the Day of the Dead festival, which takes place on November 1st and 2nd each year, locals work together to create a huge feast for the dead. Food such as mole and tamales are left out on altars so the visiting dead relatives can eat the essence of the food. It’s believed that if the meals provided are eaten by the living after the Day of the Dead, they’re completely tasteless.

Mole is one of the most important celebration foods in Mexico and often takes the centre stage at Easter, Day of the Dead, Christmas, birthdays, baptisms, weddings and funerals. Because mole is such a time-consuming and complex dish, it’s usually reserved for these special occasions and always creates excitement when it is presented.
Tamales also play an important role in festivals and celebrations. This dish is made of cornmeal dumplings which are steamed and then wrapped in corn husks or banana leaves, depending on where they are made. Like mole, tamales are also complicated to prepare, which is why they are usually made in large batches and are only cooked for specific events, such as Candelmas.

Carnitas is a type of slow-roasted pork which is the perfect filling for tacos, tortas and burritos. The meat stays soft and tender on the inside whilst being crispy and crunchy on the outside. After cooking, it’s best to shred the pork if you want to use it as a filling, or you can leave it in chunks if you’re planning to eat it on its own.

1. Put some oil in a large saucepan and place over a medium-high heat. Brown the meat on all sides – this should take around 3 minutes for each side
2. When browned, leave the meat in the saucepan and pour in the orange juice and enough broth or stock to cover the meat entirely. Stir in the garlic, onion and bay leaf
3. Bring the liquid to a boil and then turn the temperature down to low and leave to simmer for 2 ½ hours
4. After simmering, remove the bay leaf and turn the heat up to evaporate any excess liquid until you’re just left with pork, garlic, onion and fat in the pan
5. Break up the meat into golf ball-sized chunks using kitchen tongs and fry it in the fat left in the bottom of the saucepan, turning the chunks every now and then. Add a pinch of salt for flavour
6. Leave the pork pieces to cook until they’re brown and crispy on the outside. You can serve the carnitas as they are or shred the meat if you’re going to use it for tacos or burritos

Essence at the Fives Beach