Discover the beauty of Grenada

Top 10 things to do in Grenada

Known as the ‘Island of Spice’ for its plentiful reserves of nutmeg, ginger, cloves and cinnamon, Grenada is equally famous as a haven of rolling hills drenched in rainforest and waterfalls.

The so-called Spice Island is an eco-lover’s paradise complete with sugar-white sandy beaches, lush rainforests, wildlife sanctuaries and prolific spice plantations. We discover the top 10 things to do in Grenada - the laid-back Caribbean hotspot. 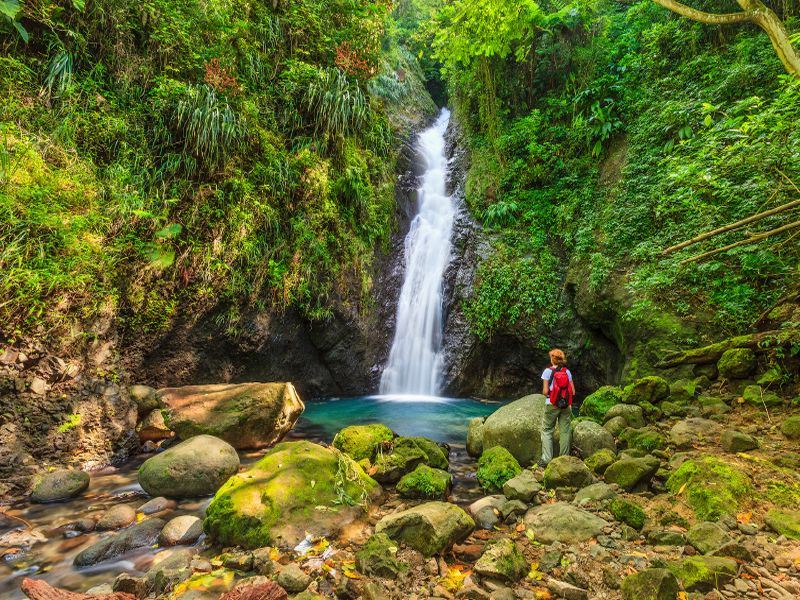 Learn the basics of chocolate-making at Belmont Estate

Where: Between the parishes of St. Patrick and St. Andrew on the north side of the island.

What: Set on a 395-acre plot in the northern reaches of Grenada, the authentic 17th-century working plantation known as Belmont Estate is an organic cocoa farm and cocoa fermentry complete with an craft market and gift shop. There is an on-site heritage museum dedicated to the estate’s illustrious history, but most impressive are the open-air dining room where guests can savour freshly-prepared signature Grenadian dishes and the Bon Bon Chocolate Shop that sells sumptuous organic chocolate delights.

Highlights: Working in cooperation with the Grenada Chocolate Company, this ‘agri-tourism’ attraction is a major player in local chocolate production. Take a plantation tour that brings the story of the cocoa bean to life by explaining how raw cocoa is fermented and processed using centuries-old techniques. Visit the petting farm, stock up on home-grown spices, take a stroll around the estate’s beautifully maintained Sugarcane Garden, Orchid Garden and Blue Garden and sample a delicious selection of goat's cheeses at the dairy.

Where: High up in the mountains of the island's central highlands, around 1,740 feet above sea level.

What: Encompassing a 30-acre crater lake - the remains of a once-active volcano - this flower-filled rainforest thrills adventure seekers with miles of accessible hiking trails of varying elevations and terrains. Before hitting the trails, enjoy a fully-charged eco experience at the Visitors Centre and Museum to learn about the park’s history and the island's vegetation and forestry. Hikes range from 15 minutes to four hours depending on stamina and are best explored with a guide.

Highlights: Teeming with flora and fauna and exotic wildlife, this emerald wonderland features several thriving eco-systems including secluded beaches, volcanic mountains and rainforest filled with Grenada doves (the national bird), Manicous (possums), Mona Monkeys, Red Necked Pigeons and tropical Hummingbirds. The standout attraction here is the Seven Sisters Trail that passes by seven of Grand Étang’s most striking waterfalls; the water rushes down the mountainside into a large pool of icy water that is perfect for swimming.

Info: The Visitors Centre is open weekdays from 8.30am to 4pm; park admission costs $2 per person.

Where: On the island’s southwestern coast, close to the capital of St. George's.

What: The iconic Grand Anse Beach is Grenada’s show-stopper, wowing beach lovers with a two-mile stretch of pristine sherbet-white sand that gently shelves into the glistening waters of the Caribbean Sea. Spend blissful sunny days beneath shady coconut palms and sea-grape trees and snorkel around nearby Boss Reef to marvel at rainbow-hued fish and coral. Many of the island’s most salubrious resorts are located within walking distance of these fabled sands which stretch from Mount Cinnamon to the island’s capital St. George's. There are plenty of small bars dotted along the white sands, most of which are open from dawn to dusk.

Highlights: Waterskiing, parasailing, windsurfing, sailing and scuba-diving are a natural draw, but it is also worth visiting the lively Grand Anse Craft and Spice Market located towards the north end of the beach. This colourful, open-air market is filled with stalls selling everything from Grenada’s famous spices to crafts by local artisans.

Info: Open daily from 8am to 7pm 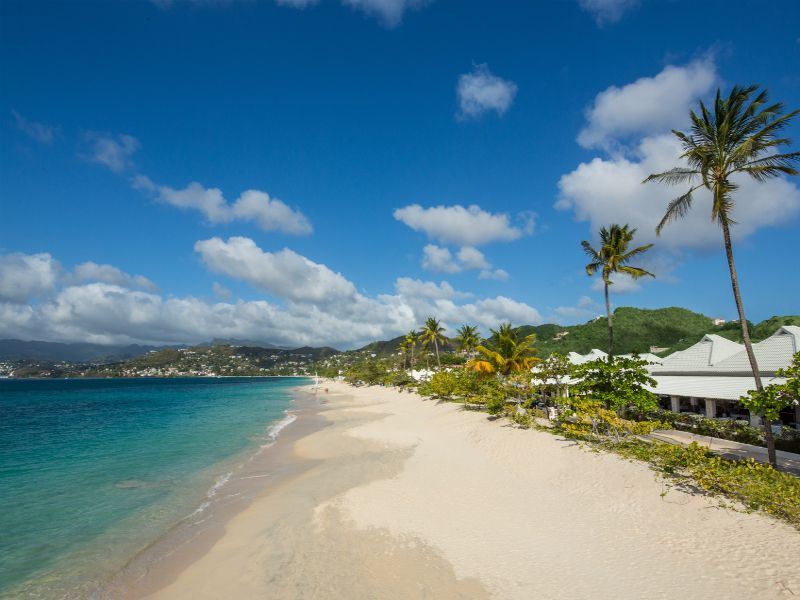 Where: In the hills of Concord, St. Johns, on the island’s western coast.

What: Most dazzling of Grenada’s waterfalls is a series of three separate cascading falls known collectively as Concord Falls. Located at the edge of the Grand Etang Forest Reserve, all three waterfalls are ideal for daredevils who fancy taking an exhilarating dip in icy cold crystal-clear waters against a stunning backdrop.

Highlights: Whilst the first fall (Concord) is very easily accessed, the second fall (Au Coin) can only be reached on foot – the trek through the forest reserve and nutmeg plantation takes around 45 minutes. The third fall (Fontainbleu) is even further off the beaten track and accessed by following a path with slippery boulders – this is the mightiest of the trio. For those who fancy taking the plunge, literally, the water cascades down a 65-foot cliff and there is a swimming area in the natural pool below.

Where: On the island’s southwestern coast.

What: Established by French settlers in 1705 and steeped in history, Grenada's colonial capital is gorgeously wrapped around the perimeter of the island's natural horseshoe-shaped harbour. Reflecting its European legacy with red tile roofs, red telephone booths, hilltop forts and whimsical pastel-painted buildings, this working port is often regarded as the most picturesque in the Caribbean.

Highlights: Feel the island’s heartbeat at Market Square where farmers and spice vendors sell their home-grown wares to bartering locals and visitors. For a taste of Grenada’s past, head to the National Museum on Young Street; opened in 1976 this structure was built by the French in 1704 and used by the British as a female prison until 1880. Other notable landmarks include the 19th-century St. George's Roman Catholic Cathedral, the stately House of Parliament and Fort George. For unsurpassed views of fishing boats, colourful yachts and whopping great cruise liners, stroll along the waterfront of the Carenage on the inner harbour. 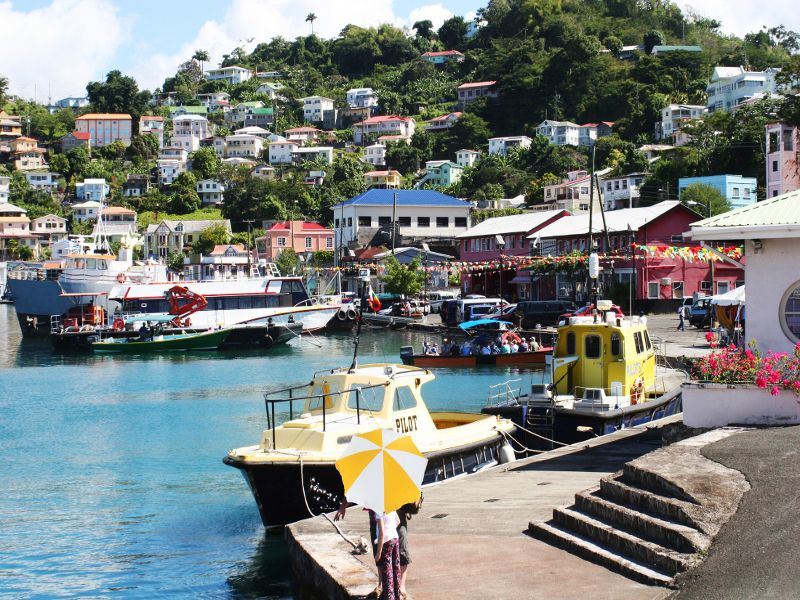 Get closer to nature at Levera National Park

Where: Along the northeastern shore of the island.

What: Hugging the shoreline, this 450-acre stretch of protected coastal parkland where the Caribbean Sea meets the Atlantic Ocean is an outstanding example of Grenada’s commitment to protect its natural wonders. This stunning haven boasts an extensive mangrove swamp, a picture-perfect beach with a natural reef to protect swimmers and a wildlife-rich lagoon filled with marine life and bird species, including Common Snipes, Herons, black-necked Stilts and the occasional parrot.

Highlights: A huge draw for weekending Grenadians, the beachfront at Levera Beach affords dramatic views of cone-shaped Sugar Loaf Island, Green Island, and Sandy Island. These treasured sands also provide a hatchery for leatherback sea turtles who come ashore to lay their eggs between May and September. Take time to explore the mangrove swamp, easily one of the island’s most outstanding ecosystems for a large variety of birds and aquatic life. Featuring stairs, a roped walkway, a boardwalk and observation tower this is the only roosting area in Grenada for the scarlet ibis.

Info: Open daily from dawn until dusk; entry is free.

Where: Most of the best dive sites are located in the south of the island.

What: Grenada’s eclectic and exotic underwater world is a first-rate diving destination that satisfies every demand; from 15 shipwrecks lurking at varying depths below the surface to an underwater volcano. Nicknamed the ‘Wreck Diving Capital of the Eastern Caribbean’, there are over 30 diving and snorkelling sites were novices and advanced divers are guaranteed an abundance of marine life and even the occasional whale.

Highlights: Designed by English artist, sculptor and avid diver Jason de Caires Taylor, the much-hyped Underwater Sculpture Park is an undersea art gallery located just outside St George’s in the Molinere Beausejour Marine Protected Area. Opened to critical acclaim in 2006, this incredible installation comprises 65 contemporary sculptures that are anchored to the sea floor in a marine gallery that can be enjoyed both from the surface and underwater – parts of the display can also be spotted from glass-bottomed boats. The collection currently houses 105 sculptures including the visually striking Vicissitudes which was unveiled in November 2012. This haunting masterpiece depicts a circle of 26 life-size children holding hands and is known locally as the Circle of Children.

Enjoy awe-inspiring cooking with a Caribbean kick at Rhodes Restaurant

Where: At Calabash, overlooking the shimmering waters of L'Anse aux Epines (Prickly Bay).

What: Overseen by Gary Rhodes, this much-lauded open-air dining room opened in 2004 as the guru gourmet chef’s only restaurant outside the UK. Located at the refined Calabash, one of the island’s leading boutique resorts, this upscale eatery has generated a global buzz for gastrophiles for its first-rate cuisine, chic décor and sublime surroundings.

Highlights: Blending accomplished, adventurous and artfully-crafted English-style cuisine with the exotic spices and flavours of the island, the restaurant is hailed as the island’s most prestigious for good reason. Open for dinner only, the ever-changing à la carte menu focusses on locally-grown seasonal produce. Past specialties have included the roast pork fillet medallions with seared tiger prawns and sweet pea puree and the signature Calabash classic shrimp and callaloo tart. The pudding menu delight with chocolate banana pudding, Bailey’s crème brulee, ice-cream cocktails and more. Reservations are required and diners are not permitted entry in shorts or casual attire. 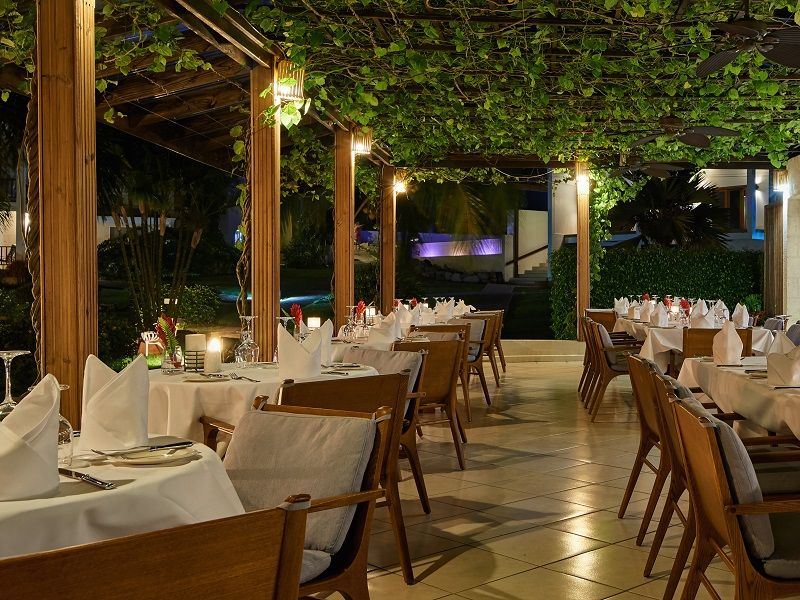 Where: Set along the stunning sands at the southern end of Grand Anse beach.

What: As part of the Small Luxury Hotels of the World collection, this uber-luxurious oceanfront property is an elegant showcase for 64 designer-led suites, many of which preside on the powder-white sands and feature double whirlpool baths, private terraces and plunge pools. Its piece de resistance is Oliver’s Restaurant, famed for its elaborate five-course gourmet dinners.

Highlights: Fabulously devised by leading US architect and interior designer Kobi Karp, Janissa's Spa boasts a reflection pool, an outdoor relaxation lounge and an expansive menu of spice-infused treatments. For the ultimate Zen-like indulgence book a signature wrap, body polish, facial or massage. Other facilities include The Nutmeg Pod, a dedicated children’s play area offering day-long supervision for children aged three to 12, a swimming pool with Jacuzzi area, a fitness centre and floodlit tennis court with Omnicourt surface. Off-site non-motorised watersports such as snorkelling, kayaking and hobie cat sailing can be arranged through the resort’s concierge at an extra charge. 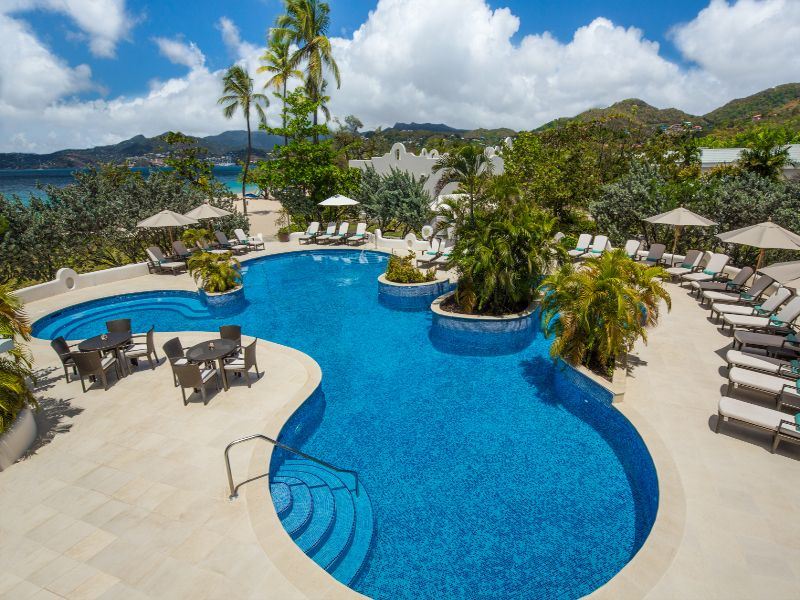 Where: Off the west coast of Grenada's sister island Carriacou.

What: Accessible by water taxi from the small port in Hillsborough, ferry from St George's or just 15 minutes by air, this clichéd Robinson Crusoe-style island off the west side of Hillsborough Bay beckons with a Bounty advertisement-worthy setting – the chocolate ad was actually filmed here. This tiny cay is still recovering from 1999’s Hurricane Lenny when nearly all of its vegetation was destroyed; nowadays the locals from the mainland and Carriacou work tirelessly to implement protection plans to restore the island’s wildlife and preserve its natural environment.

Highlights: This secluded spot boasts pristine white sands, coconut trees and azure waters. There is little to do at this unassuming paradise apart from sizzle on a towel in the sunshine under swaying palms or snorkel around the coral reef with its untouched coral gardens and over 200 species of exotic fish. You won’t find hordes of tourists here; in fact some days you might not share sand space with another soul. Also, as there are no facilities at this beach-lover's paradise day trippers are advised to pack provisions.

Discounts are included in the prices shown. Blackout dates apply. Valid on All Inclusive stays only.
7 nights From €1,699 pp
More Details

Valid in select room categories only. Discounts are included in the prices shown. Not combinable with any other offer.
7 nights From €2,999 pp
More Details