Beads of sweat were rolling down my back as we marched the dirt pathway under the thick canopy of the Colombian jungle, stepping over armies of ants and huge twisting roots. Its all very well if you’re Brazilian, I huffed as I lagged behind my travel companion and stopped to take in my incredible surroundings, I am just not bred for power walking in the tropics. Perhaps that horse might have been a good idea… 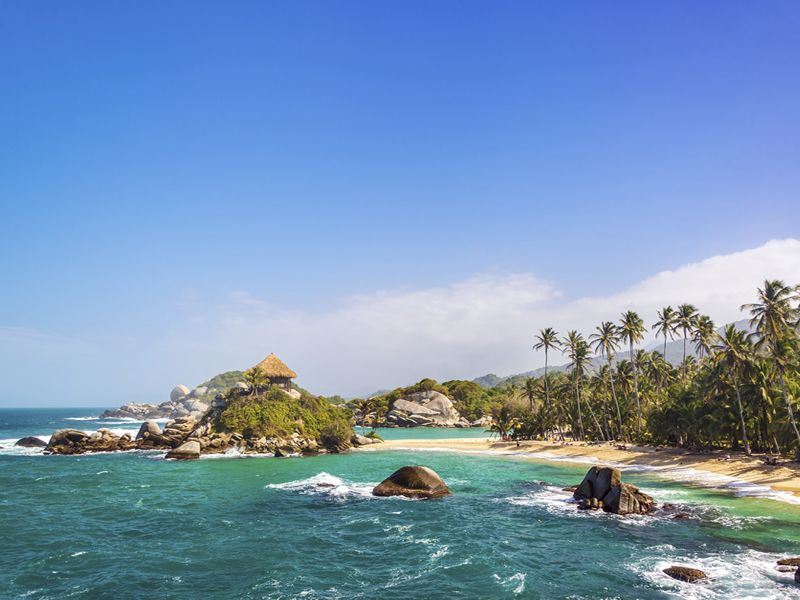 We had journeyed to the edge of Tayrona National Park, a protected area in the northern Caribbean region of Colombia. The stories we had heard from the mouths of travellers and locals alike meant there was no question that we had to come here. Covering an area of 150 squared kilometers, the park is fringed by stunning Caribbean coastline and elevates to 900 meters above sea level in the Sierra Nevada de Santa Marta mountain range. Brimming with stunning scenery, here you will find it all: the beguilement of the tropical forest, the majesty of South American mountains, the diversity of Colombian wildlife, a history of ancient civilisations, and of course the breathtaking beaches of the Caribbean.

The major city nearby is the historic town of Santa Marta. This for us was the gateway to the park and a popular tourist destination for many. With the beach, the shopping, the hotels, the restaurants and the great nightlife (this is Colombia after all!), it is not hard to see why. But a more untouched paradise awaits about 34 km away in Tayrona.

We took a bus from Santa Marta to the park entrance at El Zaino to get to the coastal area that we had heard so much about. Most of the park is not accessible by vehicle. We alighted at the park gates, paid our entrance (40,000 Colombian pesos) and clambered into one of the minibuses that take visitors as far as Cañaveral. The end of the road. Your only choice to journey to the coast from here is on foot or by horse.

Perambulating that muddy track through the forest from Cañaveral to Arrecifices (the closest beach) would ordinarily be my idea of heaven. However, it was getting dangerously close to the end of the day and we wanted to get there before nightfall. Hence the lack of leisure in our pace and the number of blurry photos I have. For us, as for most, we were intending on camping at one of the camp sites near the sea all of which have tents and hammocks for rent. Had the budget allowed, I would have had my eye on one of the thatched-roofed Ecohabs which nestle among the trees on the hillside overlooking the ocean. Rather more private and luxurious, but alas, we were intent on roughing-it.

We checked into the first campsite we came to, although there are a few to choose from. The one at El Cabo being the larger and perhaps most popular no doubt because of its beautiful beach-side location. All campsites have shower facilities and a shop to buy essentials. Be warned that goods come at a premium in the middle of a National Park. We were advised to bring as much food and water with us as we could carry. I felt rather is if I was carrying the contents of an entire fridge with me, although unfortunately none of it was chilled and most of it was rather squashed. Facilities to cook are not really the best, and actually we discovered that the campsite restaurants do serve meals at a fairly reasonable price. Plus one of my happiest memories of our stay might actually have been discovering the freshly baked bread and cake. Paradise and home cooked banana cake. What more could you ask for?

Our first glimpse of the coast was in that last half an hour of daylight when we had secured our canvas lodgings and finally made it to the beach at Arrecifices. Although dangerous to swim here because of the rip tides, I did love the drama and ruggedness of Arrecifices. Birds wade in the pools near the shoreline, palm trees and boulders are cluttered around the bay and the jungle covered mountains steeped in mist rise up behind. It is quite an amazing place to take stock of nature in all its magnificence, and life doesn’t get much better that sitting on a rock watching the sunset on one of the world’s greatest beaches.

We spent two blissful days exploring this coastal region. It is a wonderful place for adventuring on foot and we beach-hopped our way along the coast, swam in the postcard perfect waters of La Piscina and followed the trail to the resort at El Cabo, a great place to snorkel and bask in the sunshine. But if you can tear yourself away from that Caribbean sea, and I only just about managed to, it is definitely worth the adventure along a rugged stone path to El Pueblito.

One of Colombia’s most famous national treasures is the Ciudad Perdida (The Lost City). Said to be older than Machu Picchu, it is hidden deep within the park. To reach it you must go on an arranged tour and will need to allow at least four days. If time and budget don’t permit this, a two hour walk from El Cabo will take you to the ancient ruins of El Pueblito and, arguably, the next best thing. Believed to have been a significant settlement of the ancient Tayrona people, here you will find evidence of stone walls and terraces constructed by a long lost civilisation. We followed a trail of ancient stone steps up into the mountains, across streams, traversing boulders and clambering over roots and tree trunks to eventually reach the site and marvel at its history until the enticement of that Caribbean sea lured us back down to the coast.

As nice as it was to return to the city, wash off all the sand and rejoin the fiesta, It was with reluctance and at a much slower pace that we retraced our steps along that track back to Cañaveral three days later. Like an emerald, Tayrona National park is one of Colombia’s beautiful gems. To go there is to adventure to an unspoilt and utterly beautiful coastline, one most worthy of its place among the world’s best beaches.