Hang glide over Christ the Redeemer in Rio de Janeiro

I’ve always harboured a mild fear of heights. Nothing serious, just a perfectly rational voice inside my head reminding me when I’m at the top of a skyscraper, car park or first floor balcony that if I was to fall, I’d probably die. Such thoughts were non-existent as I applied factor four oil and began sizzling by the swimming pool of my Rio de Janeiro hotel. Then a voice came over the tannoy announcing my name and one other; I had won the second prize in a competition I had entered last night. The first prize was two complimentary nights in their sister hotel on the beach in Copacabana. What would second prize be, I wondered, one free night? 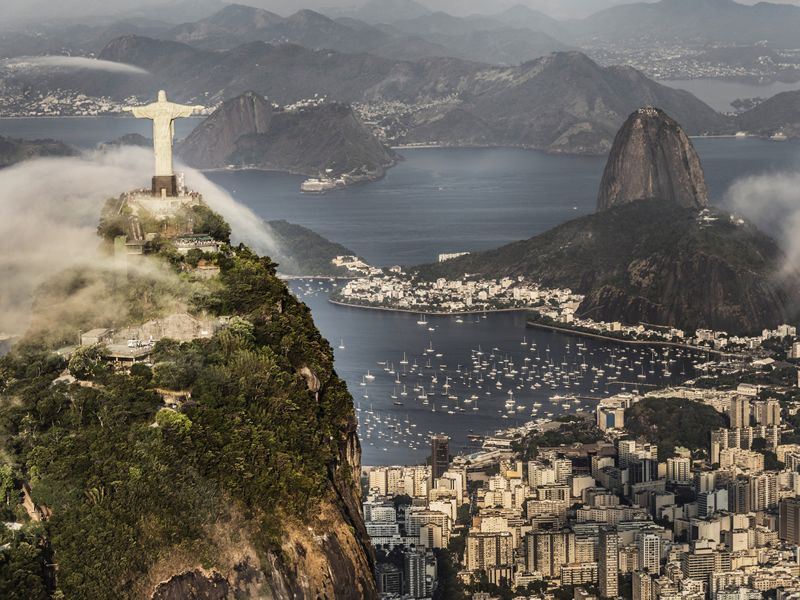 No. It was a hang gliding trip over Rio, Luiz the instructor informed me. Pretty cool, I thought. “We leave now,” he barked. Pretty soon, I thought. “There might be a storm coming and we don’t want you to die. Joking!” If he was a doctor, he’d have a pretty terrible bedside manner, I thought. Luis bundled me into a minivan and we drove up to Pedra Bonita, a luscious green mountain within the Tijuca National Forest; the largest urban forest in the world. As we arrived at the peak of the mountain, Luis could clearly sense a smattering of nerves. “Don’t worry, this is nothing, you should try base jumping.” “Was that third prize?” “No, no, no we are not allowed to offer something that could be fatal.” Was he a little obsessed with death? I guess when you spend your life jumping off things, it becomes an everyday enemy.

He strapped me in to the hang glider and attached himself onto me, this was a tandem flight. “Welcome aboard, we will not be serving food or drinks during the flight.” He nudged me in the back to clarify this was a joke. How many times have you told that one, Luiz? We took off and after a second of plummeting down to earth and my stomach lurching up to the skies, our sails caught the wind and we levelled out, beginning to float in serene tranquility.

The unrivalled calm of surveying a city from above gave me a glimpse of a taste of what space tourism would feel like. Even chaotic roundabouts and busy boulevards seemed peaceful when viewed from above, although there are other arresting vistas that quickly distract from the Scalextric cars and Lego men below. We glided over the largest art deco statue in the world: Christ the Redeemer with his arms outstretched welcoming people from near and far. Looking down on him looking down on the city felt strangely sacrilegious and also the closest I’ll probably ever get to heaven. (I was also a few metres higher than the magician Dynamo managed to get when he visited the holiest site in South America).

Next, we spiralled over the striking Sugarloaf Mountain, named during the heyday of the sugar cane trade in Brazil after its resemblance to the conical molds sugar was shaped into before it was transported to the rest of the world. Soaring over statues and mountains lends a certain sense of achievement, even if my only actions were absent mindedly entering a competition and enduring a few bad jokes from Luiz. As we passed high-rise hotels, glimmering business buildings and moneyed mansions neighbouring ramshackle favelas, a chill filled the air. It felt like more than a sobering birds eye view of rampant inequality. A glance sideways revealed ominous thunderclouds were our new neighbours. We were already on our descent as a grunt of thunder rumbled behind us, forty-five minutes goes quickly when you’re flying freer than a bird. We were heading for the white sands of Pepino beach when a bolt of lightning flashed past us. Luiz navigated the winds to steer us down to the shore, as another bolt whizzed past us in the same place.

“So it seems lightning does strike twice,” said Luiz. “We just escaped dying!” he said with a maniacal grin. He’s definitely obsessed with death, or at least cheating it. Regardless, hang gliding Rio is something you absolutely have to do. Just maybe choose a different instructor to Luiz, because now I’m definitely scared of heights.