Holidays in Dubai & The Emirates

Uninterrupted ocean views and its own private beach. Ideal for couples and families alike.

The glittering metropolis that is Dubai may well boast some of the most glamorous shopping on the planet, but there’s more to this hub of cutting-edge style than swanky super-malls. We check out the top 10 of Dubai's best family attractions, all of which guarantee fun for all ages.

10. Ski Dubai
Where: Mall of the Emirates on Sheikh Zayed Road.
What: This headline-grabbing indoor winter wonderland covers 22,500 square metres and houses around 6,000 tonnes of real snow. There’s five slopes of varying difficulty - the longest being the world's first indoor black run that stretches for 400 metres with a drop of 60 metres - as well as a state-of-the-art penguin enclosure. Equally thrilling for lovers of the white stuff is a supersized Snow Park complete with bobsled runs, tobogganing hills, dedicated spaces for little ones to build snowmen, and snow cavern with ice maze.
Best for kids: Ski classes for children aged three to six at the Ski Dubai Polar Bear Club and snowboarding lessons for the over-eights. There’s also the chance to hang out with penguins at the Peng-Friend Encounter.
Best for grown-ups: Sipping hot chocolate with whipped cream and mini marshmallows on the outdoor terrace at the Avalanche Café, and riding the Snow Bullet - a unique sub-zero 150-metre zip line that soars 16-metres above ground level. 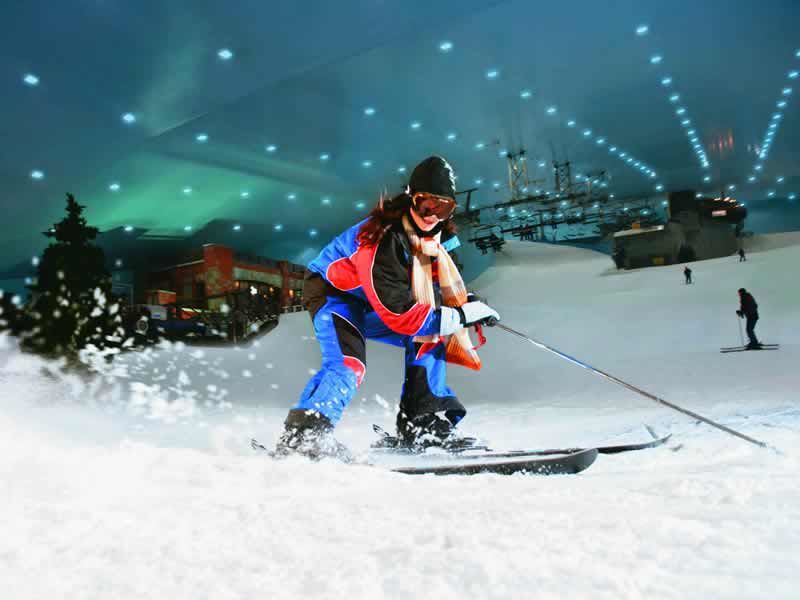 9. Kite Beach
Where: In Umm Suqeim, opposite the Al Manara Road junction.
What: Beachlife just got even cooler at a long white sandy stretch that’s a big-hitter for the city’s kite-surfers. But if boarding isn't your thing, there’s plenty of high-energy activities to get stuck into; mostly beach volleyball, soap football, beach tennis, kayaking, and hitting the jogging and walking tracks. And just to glam things up a bit, there’s a new wave of trendy concept cafés and quirky pop-up restaurants here, known collectively as the Kite Beach Kiosks.
Best for kids: Jumping, sliding and bouncing at the inflatable playground-meets-assault course in the middle of the sea. For fun on dry land, head to The Journey - a brand new playground located next to the skate park that has treehouses, splash fountains, and a pirate ship.
Best for grown-ups: The first-ever Wanna Banana store that opened on Kite Beach in 2014 takes a playful spin on the humble banana. There’s three different concepts: the ice (like ice cream but better), the boost (an energising drink) and the bite (frozen banana chunks). 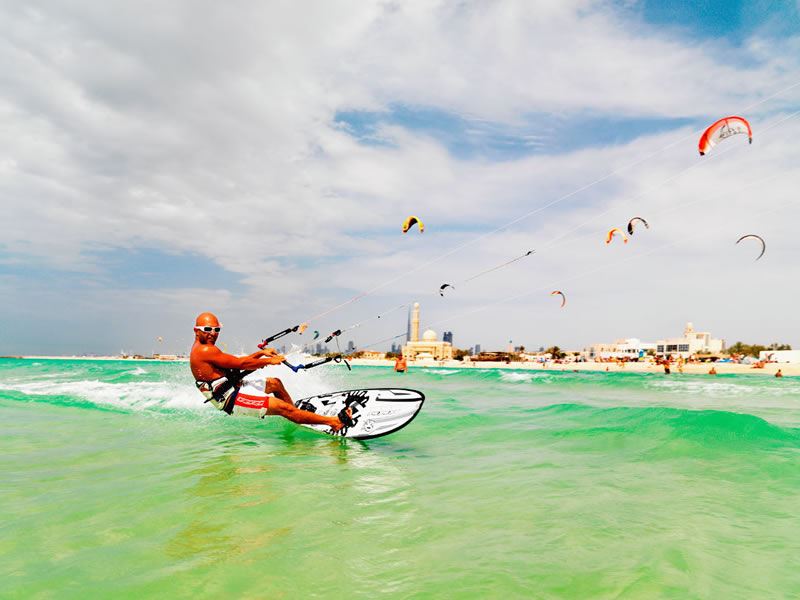 8. Dubai Turtle Rehabilitation Project
Where: At the Jumeirah Mina A'Salam, near the Al Muna and Tortuga restaurants.
What: Run in collaboration with Dubai’s Wildlife Protection Office, the Dubai Turtle Rehabilitation Project (DTRP) is a sanctuary for sick turtles. Set up in 2004, the project has rescued and rehabilitated over 560 of these loveable creatures - with some fitted with high-tech tags to track their whereabouts once they’re released back into the sea. To raise awareness about the plight of Dubai’s most-loved sea animal, the free-to-enter turtle pools at the Jumeirah Mina A'Salam are open to the public daily - there is no need to pre-book.
For kids: The 20-minute feeding sessions with DTRP’s resident turtles that take place at the Al Muna pool on Wednesdays at 11am. There’s also fun-to watch ’turtle releases’ scheduled at various times throughout the year.
For grown-ups: Whilst it’s very cute for kids to feed the turtles or watch them scrambling down to the shore, it’s worth sticking around for the educational talk to learn more about these endangered creatures and get to grips with the project’s amazing work.

7. Dubai Aquarium & Underwater Zoo
Where: On ground level at The Dubai Mall on Doha Street.
What: For aquatic thrills galore, this 10 million-litre tank houses over 33,000 marine creatures, the largest collection of sand tiger sharks on Earth, and a five-metre-long Australian crocodile named King Croc. There’s also the UAE's Night Creatures attraction for Arabian toads, giant camel spiders and scorpions, as well as Kraken’s Lair - a themed zone where you can get up-close with octopuses, nine cephalopod species, and a life-size replica of a Giant Squid.
Best for kids: The 750-kilogram King Croc is the show-stopper. There’s also the 48-metre Aquarium Tunnel set 11-metres below ground level, as well as huge schools of fish, and all sorts of weird and wonderful creatures in three unique zones: living ocean, rocky shore, and rainforest.
Best for grown-ups: Add-on experiences worth splashing out on include cage snorkelling, diving with sharks, scuba diving, and the glass-bottom boat ride. Behind-the-scenes aquarium tours are also available.

6. Wild Wadi & Aquaventure Waterparks
Where: Next to Burj Al Arab and Jumeirah Beach Hotel (Wild Wadi) and at Atlantis The Palm (Aquaventure).
What: If you can’t decide between the adrenalin-pumping watery rides at waterparks Wild Wadi or Aquaventure, do both. The former has Tantrum Alley for super-scary slides and tornadoes, and a series of gravity-defying Master Blasters - the coolest of which is the pitch-black Tunnel of Doom. The much larger Aquaventure has seven eye-popping slides, including Tower of Neptune for plunging into shark-infested waters, Leap of Faith for a 27.5-metre near-vertical drop, and Tower of Poseidon that’s probably the most stomach-churning of the lot.
Best for kids: Shark Attack at Aquaventure to twist and turn through dark tunnels before dropping into a glass-enclosed shark-filled lagoon. Little ones will love the Splasher’s area here for the water cannons, climbing frames, hanging bridges and gentle slides.
Best for adults: Wipeout FlowRider at Wild Wadi is the first of its kind on the planet. It shoots out over seven tonnes of water per second across a moulded foam structure to produce a powerful and realistic wave effect that’s perfect for body-boarding or knee-boarding.
More information and to book: Jumeriah Beach Hotel / Atlantis The Palm 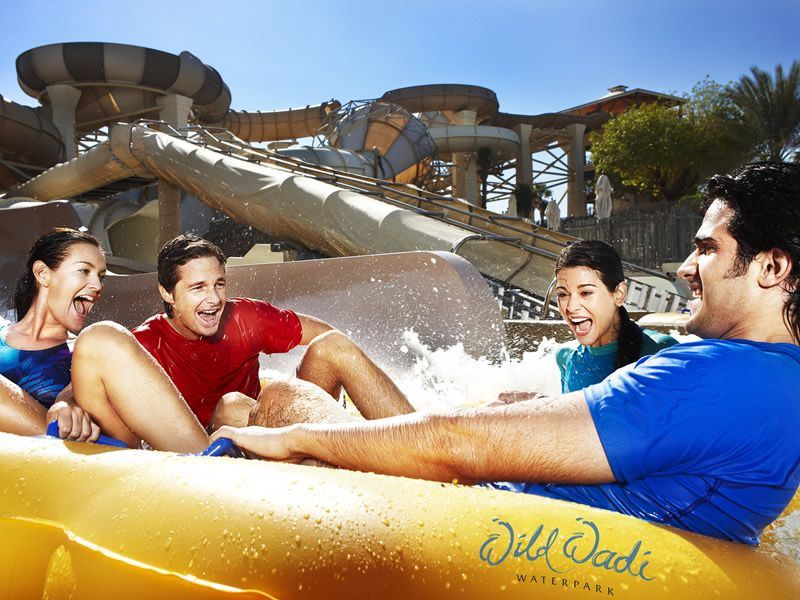 5. Bur Dhabi and the Creek
Where: Cradling the southern side of The Creek.
What: For a cosmopolitan-meets-colonial vibe, the Bur Dhabi district is home to many of the city-state's historic showstoppers, including the Heritage and Diving Village in Al Shindagha and the labyrinth of lanes lined with art galleries, cafés and quirky boutiques in Al Fahidi. No trip here is complete without stocking up on shimmering fabrics, handmade weaves and haberdashery essentials at the Textile Souk, and taking the five-minute ride across The Creek aboard one of the city’s traditional water-taxis known as abras.
Best for kids: The superb Dubai Museum beneath the 18th-century Al Fahidi Fort for its mock souk, exhibits on Bedouin life, fascinating short films, and kitsch life-size mannequins in traditional dress.
Best for grown-ups: Admiring arty masterpieces at the Majlis Gallery in the Al Fahidi district, buying one-off jewellery pieces at Meena Bazaar, and booking one of the famous dhow dinner cruises along The Creek - Dubai’s iconic waterway.

4. SEGA Republic
Where: On Level 2 at The Dubai Mall on Doha Street.
What: Causal or hardcore gamers are assured high-tech fun at this epic indoor theme park that spans 76,000-square-foot and features 250 next-generation games spread across five themed zones: Speed, Adventure, Sports, Cyberpop and Redemption. There’s arcade games, motion-simulators, simulated sports games, classic carnival games and prize-winning redemption games aplenty, as well as nine hair-raising rides and a sprawling four-level soft play area for little ones.
For kids: Riding with the iconic blue anthropomorphic hedgehog on the Sonic Hopper, sliding down the Giant Slider, and buckling up in a 4x4 for a safari adventure with a twist on Wild Jungle.
For grown-ups: Throttling up and down a seven-metre-long half-pipe at speeds of up to 40-kilometres-per-hour on surfboard simulator Halfpipe Canyon, and experiencing lightening-speed futuristic bobsled racing in capsules that rotate down sharp mountain bends on Storm-G.

3. Burj Khalifa Tour & Fountains
Where: At No.1, Sheikh Mohammed bin Rashid Boulevard.
What: The mother of all skyscrapers is a 160-storey engineering marvel that stands at over 828 metres (2,716.5 feet). Not only is it officially the tallest building in the world, but it also has the highest number of stories, tallest service lift, and highest outdoor observation deck - take your pick from Level 125 or 148. Equally dazzling is The Dubai Fountain on the 30-acre Burj Lake - this must-see music, water and light spectacle has light projections that are visible from space and ‘dancing’ water jets that shoot sprays to heights of up to 450-feet.
For kids: The free-to-watch performances at The Dubai Fountain. Expect a repertoire of classical, pop and Arabic melodies daily at 1pm and 1:30pm (1:30pm and 2pm on Friday), and every evening at 30-minute intervals from 6pm to 11pm.
For grown-ups: The Burj Khalifa Tour is worth the money for its Dubai: A Falcon’s Eye View attraction, ground floor exhibition about Burj Khalifa's construction, and Level 148 SKY At The Top - the observation deck that assures striking views across the Arabian Gulf. 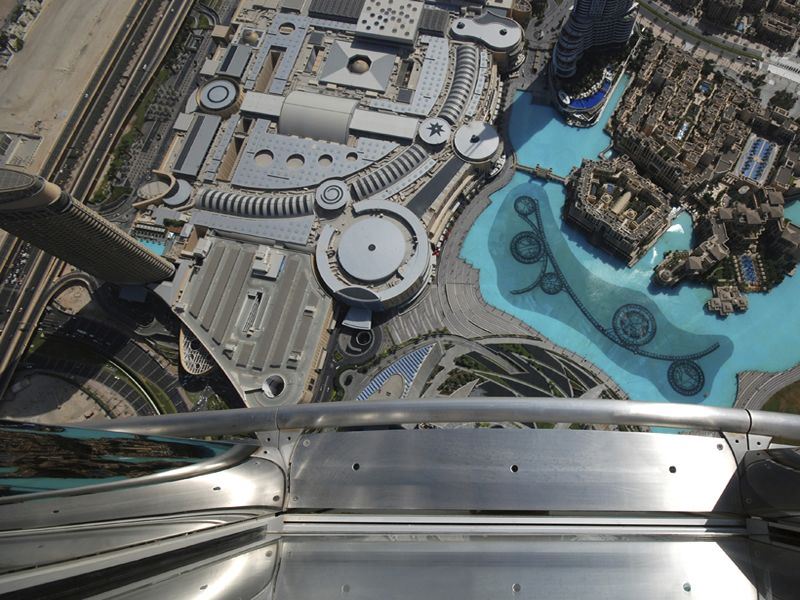 2. Dubai’s Theme Parks
Where: Opposite Palm Jebel Ali, on Sheikh Zayed Road
What: This integrated theme park resort is incredibly fun for the whole family, home to three theme parks, a water park, and a retail and dining park. The three parks consist of MOTIONGATE Dubai - full of rides and entertainment inspired by three of the largest motion picture studios in Hollywood (DreamWorks Animation, Columbia Pictures and Lionsgate), Bollywood Parks Dubai – with cafes, shopping, rides and shows inspired by Bollywood blockbusters, and LEGOLAND Dubai, offering over 40 LEGO themed rides and attractions.
Best for kids: With so many incredible rides, exciting attractions and immersive shows in one place, who wouldn’t love Dubai’s theme parks? From gaining your LEGOLAND driving license and learning how to create a blockbuster in Bollywood Parks, to enjoying over 20 slides in the LEGOLAND Water Park and riding scary roller coasters in MOTIONGATE, a day here will create plenty of unforgettable, fun memories.
Best for grown-ups: Big kids at heart will love spending time at Dubai’s theme parks too – each park has the whole family in mind, and there is plenty to keep you entertained and excited. Need a slight break after all the exhilaration? Riverland Dubai, the dining and retail destination, offers four different zones full of delicious restaurants and beautiful architecture.

1. KidZania Dubai
Where: On Level 2 at The Dubai Mall.
What: This much publicised educational kids’ paradise is a sprawling 80,000-foot indoor space built to resemble a city where children can play at having real ‘jobs’; everything from pilot, DJ, dentist, TV presenter, police offer, mechanic, beautician and journalist is offered in 20-minute slots. Children get rewarded for their efforts with KidZos (KidZania currency) and can even open their own personal savings account which comes with a debit card to use at the ‘city's’ ATMs.
Best for kids: Everything. Kids aged between four and 14 can choose from 60 exciting real-life professions and use their hard-earned cash to spend on sweets or treats in the KidZania shop – or keep in the KidZania bank for future visits. Admission is free for the under twos.
Best for grown-ups: Leaving your kids alone with the designated Zupervisors for the entire two-hour session is a godsend - but if they’re really little you will need to accompany them to each of their ‘jobs’. For peace of mind, children are electronically tagged with a special security bracelet so you can keep track of them at all times.