Top 10 things to do in Cambodia

Beyond the awe-inspiring temples at Angkor, Cambodia’s colourful floating villages, atmospheric colonial cities, stunning landscapes, outstanding cuisine and white-sand beaches also deserve plenty of attention. We discover the top 10 things to do in Cambodia, a captivating land that seals the deal for intrepid travellers. 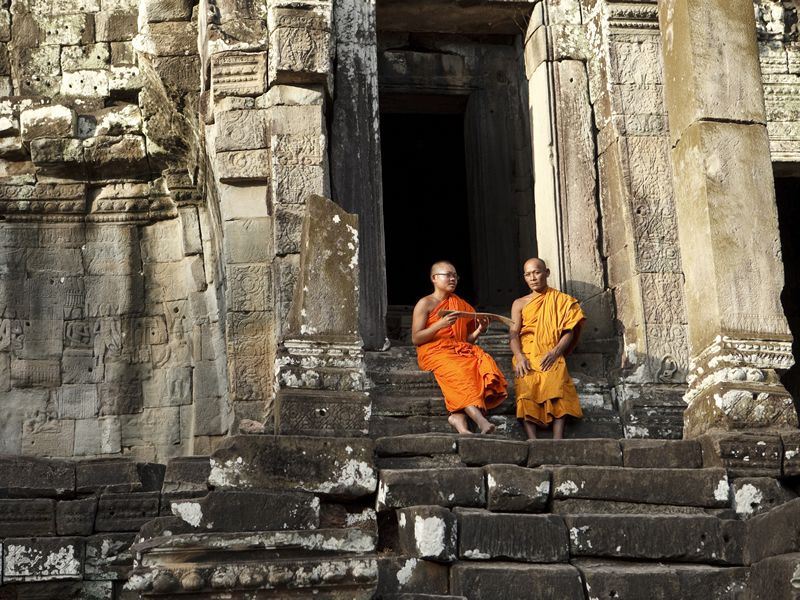 What: Hailed as one of the world’s oldest cuisines, Cambodian food (known as Khmer cuisine) is somewhat similar to that of its neighbours Thailand and Vietnam, but has its own unique blend of spices, textures, temperatures, and presentation. The best-known dish is Fish Amok - fish whipped into a mousse with fresh coconut cream and kroeung, a type of Khmer curry paste made from lemongrass, turmeric root, garlic, shallots and ginger. Also popular is Khmer Red Curry, a coconut-based mild curry traditionally served with bread. 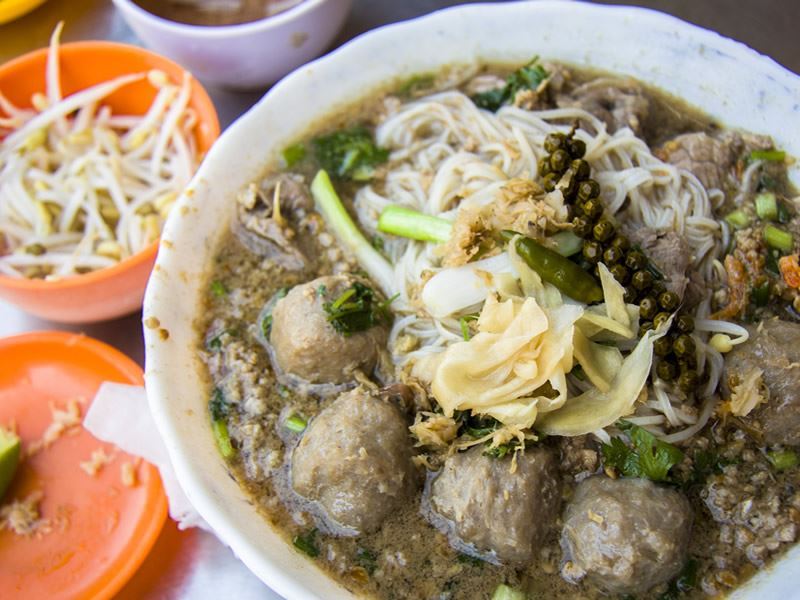 Savour crab specialities in the seaside town of Kep

Where: Located southwest of Phnom Penh.

What:  Founded as a fashionable colonial retreat for the French elite in 1908 and later ravaged by civil war in the 1970's, Kep is an up-and-coming beach playground fuelled by faded glamour, tropical seaside bliss, and boutique hotels. Whilst visitors adore this so-called ‘Cambodia Riviera’ for its architecture, jungled interior and must-see butterfly farm, it most satisfies those with a taste for seafood.

Highlights: Kep is world-famous for its delicious crustaceans, best found at the Crab Markets along the shoreline and at the town’s many oceanfront crab shacks. For those do not fancy tucking into crabs bought directly from source, head to one of the many family-run restaurants and order Kdam Chha Mrich Kchei – otherwise known as Kep crab fried with Kampot pepper. This is the town’s speciality dish, made with fresh juicy crabs that are plucked straight out of the sea, fried with green peppercorns from the nearby plantations at Kampot, and served with a green pepper sauce. 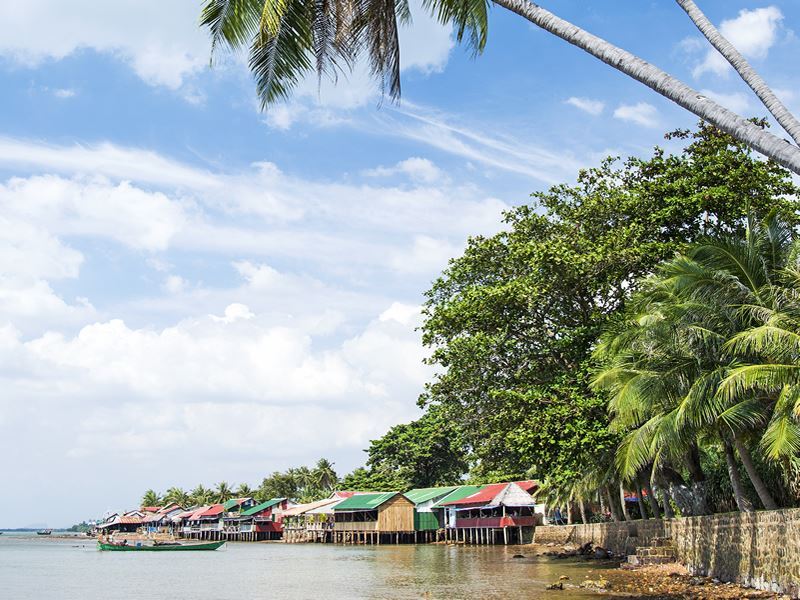 Where: Throughout Cambodia, especially in Siem Reap.

What: A classical dance style dating back to the Angkorean era, Apsara is embedded in Cambodian culture and currently enjoying a revival. Performed in the country’s most tourist-friendly cities, especially in Siem Reap, the most popular types of Apsara are Classical Dance, where dancers make slow, graceful and sensual movements wearing traditional Khmer clothing to present a story of the ancient Angkor period, and Folk Dance, where dance rituals are performed for celebrations and holidays.

Highlights: Apsara dance and dinner shows are a must-do in Siem Reap and offered at many of the city’s upscale hotels and restaurants. Most fabulous is at Apsara Terrace in Raffles Grand Hotel D'Angkor, the luxury bolthole in Siem Reap’s Old French Quarter. Gorgeous gardens surrounded by majestic wooden gates set the scene for an impressive Apsara dance show, pan-Asian barbeque dinner, and pre and post-show cocktails. Shows run daily, starting at 7.45pm. 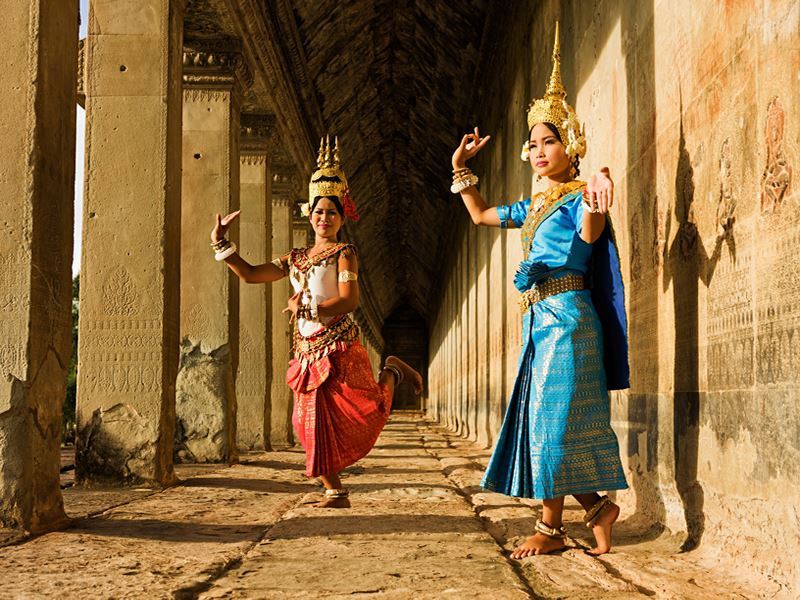 Where: Located 17 kilometres from Siem Reap.

What: The largest freshwater lake in Southeast Asia, Tonle Sap is Cambodia’s crucial natural resource in terms of fishing and wetlands. Flowing into the Tonle Sap Lake, joining the Mekong River in Phnom Penh, these life-giving waters are home to communities living in stilted houses in floating ‘villages’ that move from place to place seasonally. Over the course of the year, the lake can fluctuate from depths as low as two metres to as high as 14 metres.

Highlights: The best time to see life on Tonle Sap Lake is to visit the self-sustaining floating villages of Chong Kneas, Kompong Phluk and Mechrey during the rainy season - between June and October. There is a colourful vibrancy to these thriving water-based communities, and cruising around the villages by boat to see supermarkets, hospitals, churches, markets, police departments, post offices, and even basketball courts is the best way to experience Cambodian river life. 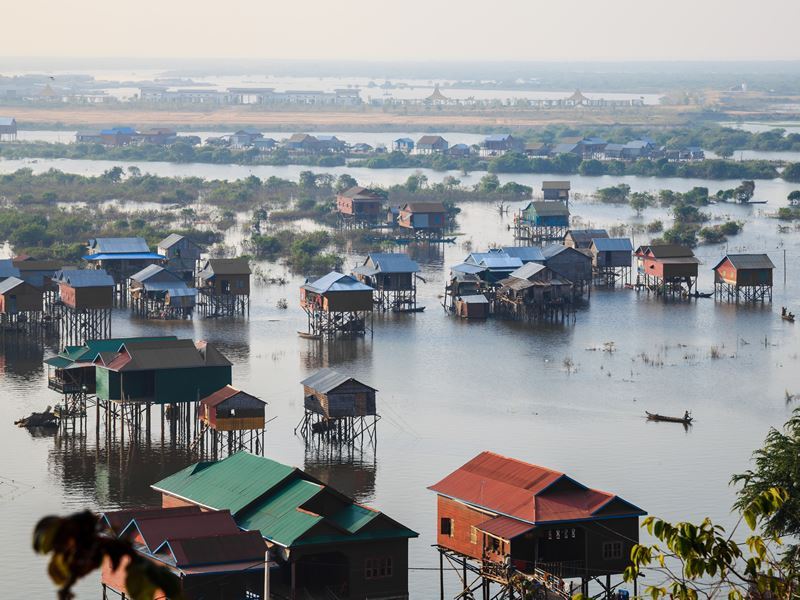 Where: Set around 10 kilometres southeast of the coastal city of Sihanoukville.

What: Also known as Koh Ru or Koh Russei, Bamboo Island is an idyllic back-to-basics beach destination. Located an hour from Sihanoukville, this was one of the first islands to cash in on tourism, albeit by way of just three no-frills bungalow resorts, two bars, and two restaurants. For those who are seeking solitude, this is the perfect place to swim in crystalline waters, laze on golden palm-lined sands, swing on a hammock, and enjoy sundowners under the stars.

Highlights: There is little in the way of mod cons on Bamboo Island; there is no Internet and electricity is only available between 6pm and 11pm. Those staying in the rustic bungalows can expect public showers using well-water buckets, shared toilets, and rooms or dorms kitted out with just a sheet and mosquito net. This is real castaway island stuff and there is little else to do than feast on delicious seafood barbecues, chat to local anglers, play beach volleyball, listen to the waves, and chill out completely. 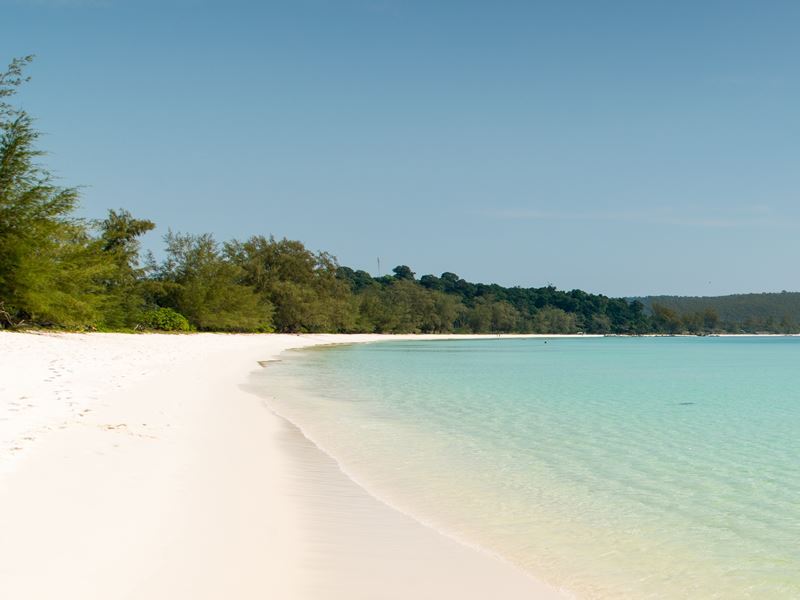 What: Set on the banks of the mighty Mekong, Kratie is a charming and sleepy riverside town rich in French colonial architecture. The main attraction, however, is the small population of rare freshwater bottle-nosed Irrawaddy dolphins that are found at Kampi, a village 20 kilometres north of Kratie along the river road towards the Laos border. Facing extinction, there are only 75 of these critically endangered dolphins remaining in the Mekong River.

Highlights: To see these unusual-looking cetaceans at close range, take a tuk-tuk or motorbike taxi to Kampi. Here a small motorboat will take you into the middle of the peaceful river, turn off the engine, and wait for to the dolphins to pop up through the waters for a rendezvous. Boat tours last for up to two hours and typically costs £10 per person (based on two people sharing a boat). These beautiful and playful dolphins famed for their squashed-in nose, straight mouth and rounded fins are held sacred by the Cambodian people, and praised by local Mekong anglers as ‘extraordinarily intelligent’. 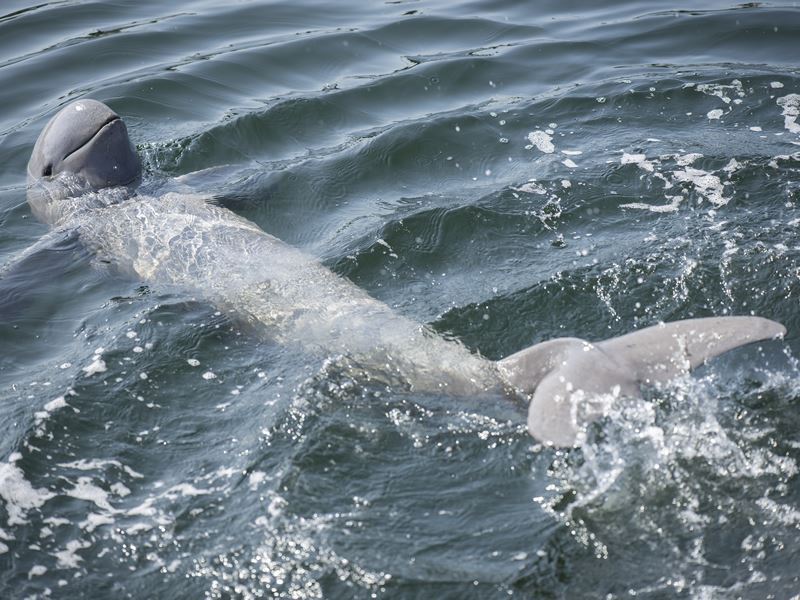 Where: At the confluence of three rivers: the Mekong, Bassac and Tonle Sap.

What: Once known as the ‘Pearl of Asia’, Cambodia’s capital Phnom Penh is one of the prettiest French-built cities in Indochina complete with a new wave of upscale restaurants, chic nightclubs, and swanky boutique hotels housed in old colonial mansions. Most fascinating is the National Museum, a showcase of one of the world's largest collections of Khmer art, and the moving Tuol Sleng Genocide Museum (S-21 Prison) that serves as a reminder of Cambodia's war-torn past under the Khmer Rouge.

Highlights: No visit to Phnom Penh is complete without marvelling at the resplendent Royal Palace, a compound of nine buildings built in the late 1860’s by King Norodom. Most exquisite is the Throne Room topped by a 60-foot golden spire, and the Silver Pagoda with its 5,000 solid silver floor tiles, small 17th century Baccarat-crystal Buddha (known as the Emerald Buddha of Cambodia), and life-sized solid gold Maitreya Buddha decorated with 9584 diamonds. 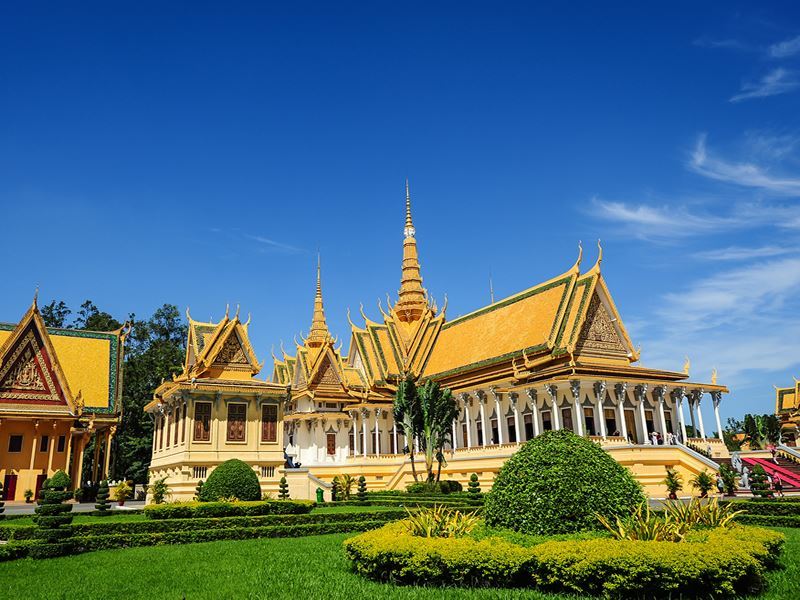 Be moved by the chilling Killing Fields of Choeung Ek

Where: 15 kilometres southwest of Phnom Penh.

What: Horrifying and disturbing yet imperative for those visiting Cambodia who want to comprehend its tragic past, the Killing Fields are a vivid reminder of one of the most alarming genocides in history. Around three million civilians were murdered between 1975 and 1979 under the Khmer Rouge regime - 17,000 of whom were dumped into 129 mass graves at the extermination camp at Choeung Ek.

Highlights: Visitors can see over 8,000 human skulls and other body parts exhumed from mass graves inside a 17-storey Buddhist memorial stupa erected in 1988 in the Choeung Ek grounds. Admission to the Killing Fields costs around £3 and includes an audio guide that features first-person accounts by those who survived the Khmer Rouge, plus a chilling account about the murder techniques used. The site is open daily and is not suitable for young children and adults who are easily shocked. 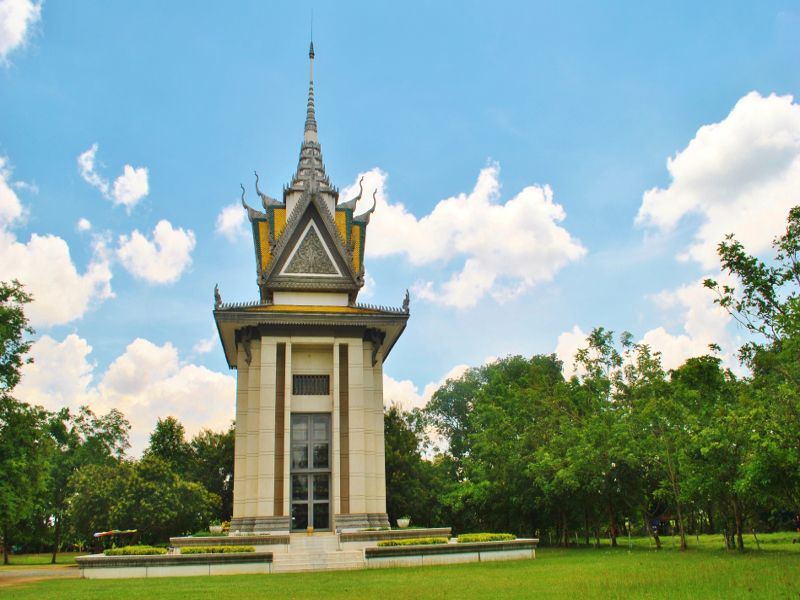 Take a luxury cruise on the Mekong River

Where: Flowing through Cambodia.

What: The Mekong River is the heart and soul of Southeast Asia, rising from the Tibetan Plateau and running through China, Burma, Thailand, Laos, Cambodia and Vietnam. Many cruise operators offer Mekong runs between Cambodia and Vietnam complete with culturally-rich itineraries that take in Siem Reap, Angkor Wat, Tonle Sap Lake, and the beautiful old French colonial capital of Phnom Penh.

Highlights: Sailing between Vietnam’s Saigon and Cambodia’s Phnom Penh, RV Jayavarman - the five-star Heritage Line vessel named after Angkor’s most venerated king - is the most luxurious of the Mekong River cruise liners. Each of the 27 spacious staterooms features full-length panoramic sliding glass doors leading to a private French balcony, stylish bathrooms, and fabulous state-of-the-art design touches throughout. Guests can enjoy indulgent pampering treatments in the Apsara Spa, relax in the bars and lounges, dine in the Indochine restaurant, and take in the superb views of the passing delta and floating villages from the sundeck. 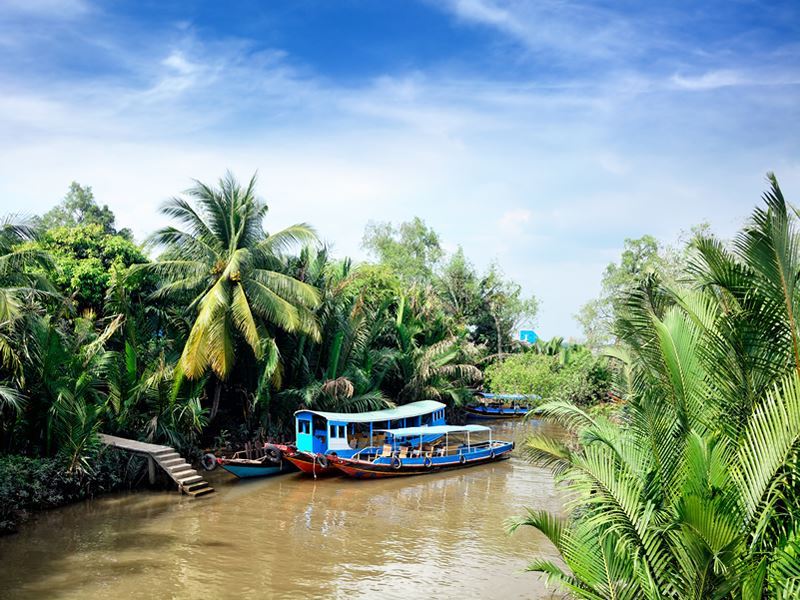 Where: In Cambodia's northern province of Siem Reap.

What: Although famed as the gateway to the fabled 12th century Khmer temple complex of Angkor, the city of Siem Reap is visit-worthy in its own right for colonial buildings, chic hotels, upscale restaurants, charming cafés, and cool cocktail bars. Explore the city by tuk-tuk (three-wheel taxi) before heading four miles north to the magnificent temples that are set over 400 kilometres between Tonle Sap Lake and the Kulen Mountains.

Highlights: Best explored at sunrise if you want to beat the crowds, Angkor is home to hundreds of temples. Angkor Wat (meaning City Temple) is the star attraction and Cambodia’s most beloved architectural masterpiece. Built between 1113 and 1150 AD by King Suryavarman II to honour the Hindu god Vishnu, this 500-acre iconic soaring temple is staggering in scale, ranking as the world’s largest religious monument. Running a close second is Jayavarman VII’s Bayon at Angkor Thom, the fortified state-temple dominated by 216 colossal stone-chiselled ‘smiling’ faces on its 54 remaining towers. 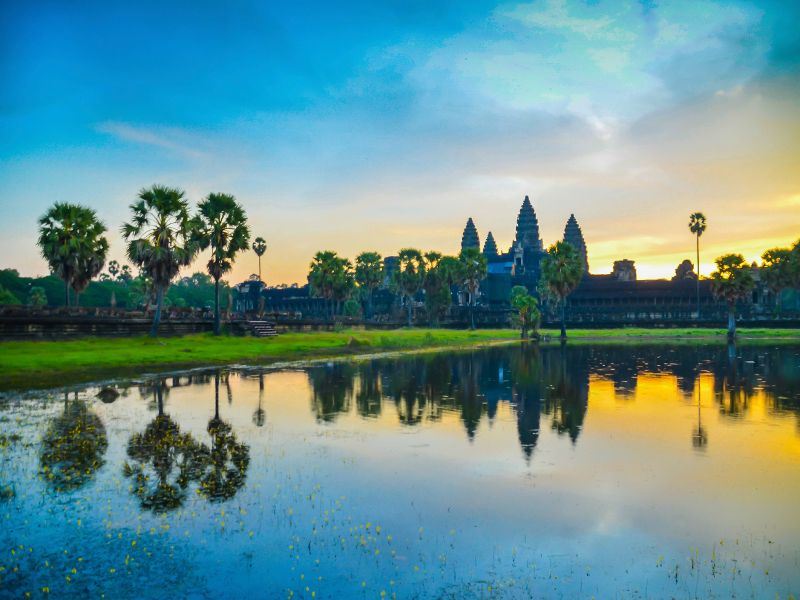