Experience amazing Adult Only Holidays at The Club Barbados

The Ideal location for idyllic and laidback adult holidays

Even the A-list and reality TV stars need a break sometimes, and we know where they flock to – the beautiful west coast of Barbados. From Simon Cowell and the Rooney’s, to model Cara Delevingne  and Barbados-born Rihanna, they all travel to this exotic Caribbean island and you’ll be sure to spot a few familiar faces relaxing or having fun on the beach. But why is Barbados so popular with celebrities? From the most luxurious resorts and thrilling excursions, to the best times and places to spot your favourite TV or movie star, we know why this gorgeous island beckons so many.

Fancy doing a bit of celeb spotting during your Caribbean getaway? Make sure to holiday in Barbados near Christmas and New Year - the winter sun regularly draws celebs to the tropical island. December and January offer a desirable climate for an end of year holiday, with the slightly cooler weather reaching a high of 29 degrees, and the dry season means you won’t be caught out in the rain. Last Christmas Cara Delevingne was seen holidaying with her family and partner Annie Clark (St Vincent), most likely getting ready for Simon Cowell’s annual New Year bash at the Sandy Lane hotel.

The West Coast; otherwise known as the ‘Platinum Coast’ thanks to its usual celebrity visitors, fine sand beaches and luxury holiday accommodation, is the chosen region to stay, dotted with fabulous hotels, expansive golf courses and gourmet restaurants. Known as one of the most popular celebrity hotspots in the world, we can’t help but think the celebs know they’ll be snapped on the beach whilst they sunbathe in the sand. Why not get a tan and a bit of media coverage at the same time? 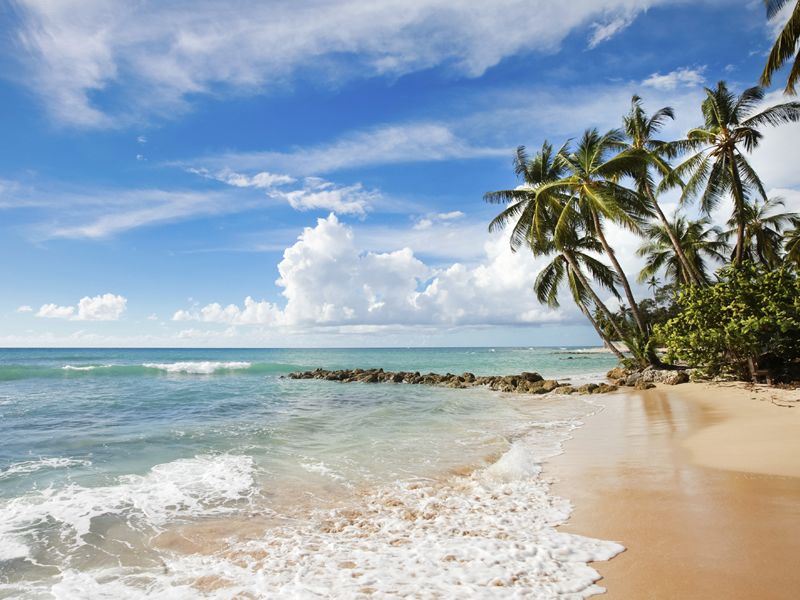 Barbados certainly has some celebrity regulars. Bajan babe Rihanna, poster girl for the island, is regularly spotted partying the night away or topping up her tan in a bikini as she gets back to her Caribbean roots. Head to the Kadooment Day parade held on the first Monday of August and you’ll be sure to bump into the singer, partying with flocks of bejewelled dancers, or find her relaxing on the beach at Christmas time with a group of friends. Born in Saint Michael and raised in Bridgetown, Rihanna regularly enjoys some down time at the island.

Without fail, dog lover Simon Cowell is annually found soaking up the sun in Barbados over the winter holiday season. His New Year parties at Sandy Lane are well-known for getting a little bit wild, and whilst visiting the island, Cowell is sure to show support for the Hope Dog Sanctuary in St John at their annual fundraising auction, or regularly snapped feeling the adrenaline on a jet ski.

It’s not just the A-List though that head for Barbados. The island is now a popular hotspot for reality TV stars, taking a break from living their lives on the TV, and being snapped by paparazzi instead. Take to the beach at Sandy Lane and you’ll probably spot Jamie Laing, Lucy Watson and Jess Woodley from Made in Chelsea basking in the sun.

We expect only the best – and subsequently, the most expensive, when it comes to celebrity Barbados holidays – and we were right. To lie back on your sun lounger amongst the A-list stars, book a stay at Sandy Lane resort, a stunning five-star beachfront retreat that’s extremely popular with the likes of the aforementioned Simon Cowell, the Beckham’s and Gwyneth Paltrow. A truly beautiful resort indeed, but it’ll cost you. The cheapest room, the Orchid, starts at around £900 per night, whilst the Penthouse goes up to a whopping £3,300, if not more – though with a golf course and world-class spa nearby, we can see why.

If you do fancy holidaying close-by to your favourite celeb, a week’s holiday at The Club Barbados Resort & Spa start at only £1,269 per person including flights. This tropical adults-only, all-inclusive retreat, just a short distance from Sandy Lane, is much more affordable than its high-class counterpart. You’ll even get daily turtle swim excursions, and plenty of celebs rest their head here too. For something even more extravagant, walk along the West Coast to The House by Elegant Hotels. This sophisticated, adults-only hotel starts at £1,579 for a seven night stay, offering a truly laid back holiday. You’ll be treated like a celebrity here, with champagne breakfasts, beach and pool service, and complimentary watersports – but at a great price.

If you can afford to splurge, why stay at a hotel when you could rent a mansion? Wayne Rooney’s £5 million Barbados holiday home is available to rent. With the beach right by, a colourful golf course surrounding the property and featuring a sparkling infinity pool, there’s no wonder why the Rooney’s chose this particular spot to buy their extravagant holiday pad. If you want to live the life of a sports star it’ll only cost you £8,000 a week, but thankfully groups of up to 14 can stay - so at least you can split the cost. The holiday mansions in Barbados are magnificent and sumptuous, with swaying palm trees, enviable pools and more rooms than you can count – we’re surprised there aren’t even more celebrity holiday homes here. 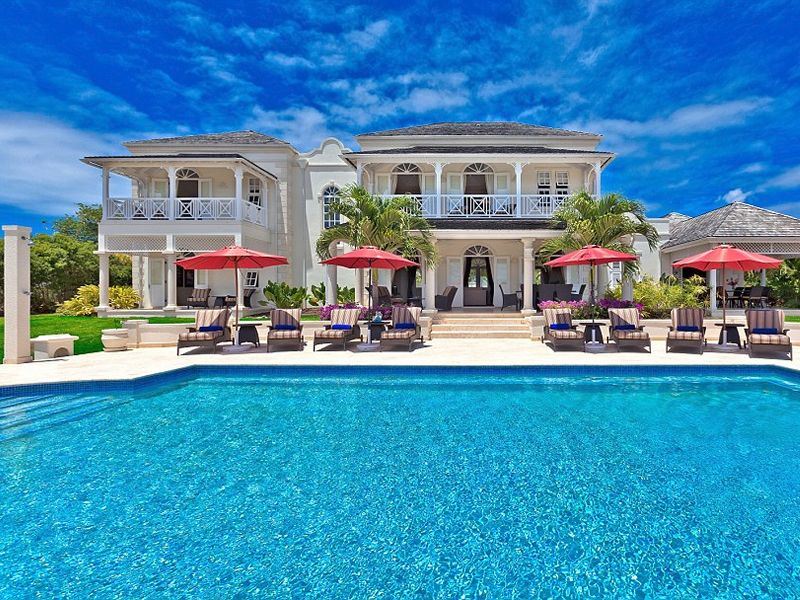 With golden stretches of sand, picture-perfect sunsets and incredibly opulent venues, it’s no wonder Barbados is a popular spot for a celebrity wedding too – it’s the perfect landscape for a magazine cover photo. Most recently was the nuptial of Kimberley Walsh and her now husband Justin Scott, boasting not only a unique backdrop but also a star-studded guest list, including ex-band mates Cheryl and Nicola Roberts. The spectacular wedding was located at the Bellevue Plantation, which costs a whopping £10,000 to hire per day - though the price does include eight bedrooms, staff catering to your every need, airport transfers, car rental, a hairdresser and massages whenever you desire – worth it, right? 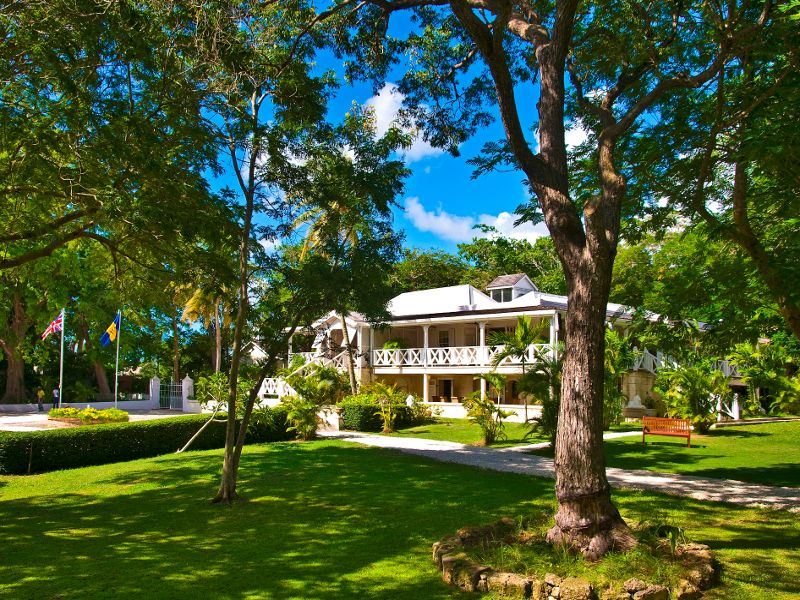 Plenty of celebrity couples travel to Barbados and create a myriad of relationship speculations in the press, but there are plenty of families enjoying the sun, sand and sea too. Simon Cowell was recently seen spending some quality time with girlfriend Lauren Silverman and son Eric, whilst the Rooney’s regularly bring the kids along to their luxurious mansion for an annual Caribbean getaway. Mum and dad are probably hoping to catch some sun, but there’s plenty to do on the island to keep the kids entertained too. We have no doubt the Rooney’s loves swimming with turtles, eating tasty food on the beach, playing a round of golf and maybe even enjoying a few thrilling water sports during their luxury holiday, whilst sons Klay and Kai must have a whale of time making sand castles on the beach.

It’s not all just sun loungers though; the ruckus of engines and the adrenaline rush of motorsports play a big part in luring the celebs here, too. From February through to November the island is alive with a variety of motorsport events, including the thrill of circuit racing, drag racing and special stage rallies, which entices the likes of popular Mercedes racer Lewis Hamilton to holiday in sunny Barbados. While horse racing is a big part of Barbados’ heritage, host to one of the oldest racing tracks in the Americas, Garrison Savannah, Bushy Park Racing Circuit in Gaskin, is the place to go for petrol head celebs.

Had you whisked yourself away to the island in February, you may have spotted the commotion caused by Jeremy Clarkson, Richard Hammond and James May as they filmed part of their new Amazon series near the crystal blue sea – we expected nothing less. The trio were snapped on a barge as the remains of cars were lowered in the water, seemingly to create a reef, though Jeremy was quick to also Tweet a photo of him testing out a water-propelled hover board. No, we weren’t jealous at all.

For an activity a little less hectic, Barbados is home to a number of expansive golf courses, renowned as some of the best championship courses in the Caribbean. The beautiful weather and vibrant green hills offer the perfect landscape, with several hotels and resorts offering special golf packages. The Green Monkey in Sandy Lane is a particularly popular one - designed by Tom Fazio, this 72 par golf course has been carved from an old limestone quarry, dotted with palm trees and sparkling lakes. Golfing dynamo Tiger Woods said his vows amongst one of Sandy Lane’s golf courses, whilst Wayne Rooney’s lavish mansion is nestled on a Royal Westmoreland course - so there’s no doubt you’ll see a few celebrities riding the golf carts should you pay a visit. 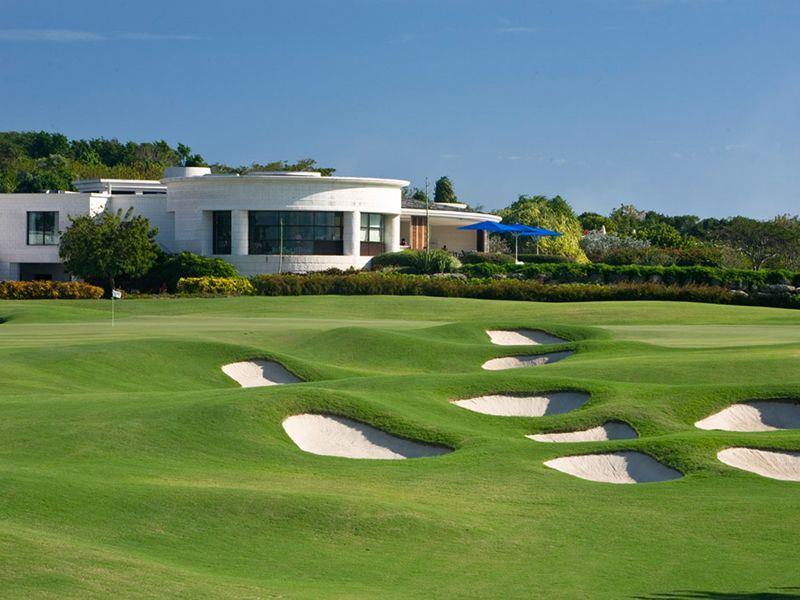