We zoomed cautiously through the countryside on old Honda dirt-bikes as the red dust rose behind us. Peppercorns wafted spice from the roadside, where they lay drying on multi-coloured tarpaulins guarded by Buddhist shrines. We hit the main road and increased our speed until we all simultaneously stopped, eyes kidnapped by the same arresting image. Coconut Prison. A barbed-wire fenced penitentiary protected by armed guards in watch towers aiming automatic weapons at the prisoners inside. Guards were at the gates too, holding huge dogs on leashes. They were stood strangely still. We noticed the gates were open, and ventured closer. We saw two Vietnamese men walk out through the open gates. Visitors. We approached the man and guard dog at the gate. They didn’t respond. Working. As I was about to address them, a lifeless reflection flashed off the back of the dog. They were statues. So were the guards in the watchtowers. It wasn’t real. 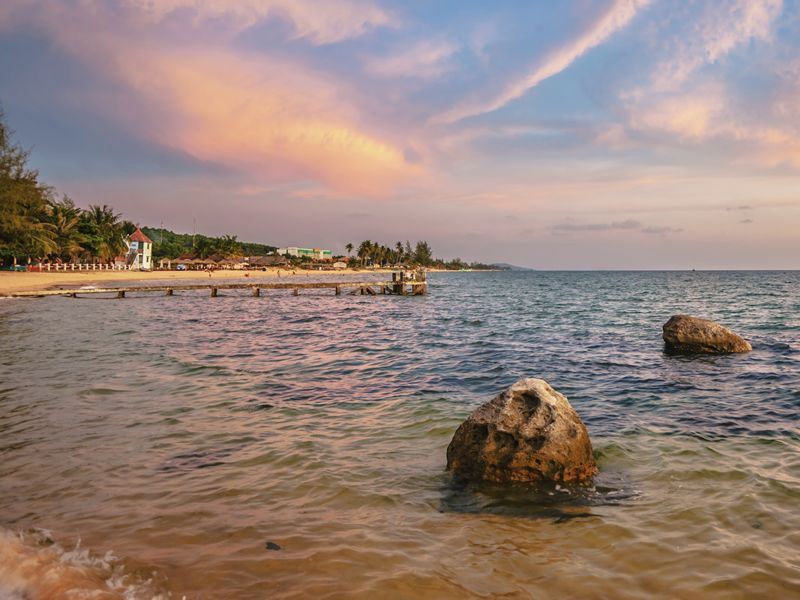 It was a fully-functioning prison during the Vietnam War, though. A camp for Vietnamese POW’s which is now a tourist attraction and a necessary reminder of the evils of war, paradoxically positioned en route to the island’s best beach. Sao Beach is accessible only by motorbike. After traversing rubble-strewn highways and bouncing along a crater-filled dirt track lined by thick tropical trees, you arrive at a clearing, head through an open-air restaurant and emerge in a hidden paradise. It possesses all the hallmarks of one of the best beaches in the world; soft, squelchy white sand tumbling into a sea which, for the first thirty or so metres, is more the colour of an exotic lagoon than an ocean. It’s unreal.

Until recently, the extent of Phu Quoc’s industry was manufacturing world-beating nuoc man fish sauce and cultivating the aforementioned pepper plants. In characteristically low-key fashion, they are grown in palm-shaded vineyards in the sandy interior of the island. Then tourism extended its irreversible hand a few years ago, and is beginning to leave footprints. Five star resorts now neighbour quaint fishing villages, a state-of-the-art international airport is already open for business and a golf course and casino are currently under development. If you prefer paradise untouched to well trodden there is still time; but I suggest you plan your journey imminently. There is a light at the end of the rainbow though, incidentally a phenomenon which occurs frequently due to the ever-present sun and regular tropical rains. The clumsy march of mass-market tourism will not trample over the majority of the island after the Phu Quoc National Park, which covers over seventy per cent of the island, was pre-emptively declared a protected region in 2001.

As we zoomed back along the ramshackle roads to our resort, I noticed an aerial picture of this teardrop-shaped island on a placard advertising land for sale.

This place has inspired tears for years; of pain at Coconut Prison and more recently of joy and amazement as intrepid travellers stumble across the beaches and their eye watering beauty. I sincerely hope there is not a third installment of tears over a paradise lost as the developers roll into town and build over the soul of an island that still runs electricity from generators and gets it water from wells. As I sit here on the beach, watching fisherman lazily catching squid and a fat lizard patrolling a palm tree for stray mosquitoes, I’m struck by one thought. This place is real.

More information and to book: Discover one of Vietnam's best kept secrets as you head for the white sand beaches of Phu Quoc's west coast and check into the boutique resort of La Veranda which is part of the MGallery collection.