The capital of Cuba has been called one of the most exciting travel destinations, a vacation hotspot that offers the chance to step into city streets and feel as if you’ve gone back in time to the 1950's, with classic Fords and Chevys cruising around town and parked in front of the massive columned palaces and colonial facades. In the historic seaport, you’ll discover the pulsating rhythms of Caribbean and Africa, which can also be found throughout its tasty cuisine as well as after dark in the clubs. While the food pickings were once rather slim, today, things have changed as many top chefs have started to open upscale restaurants too. 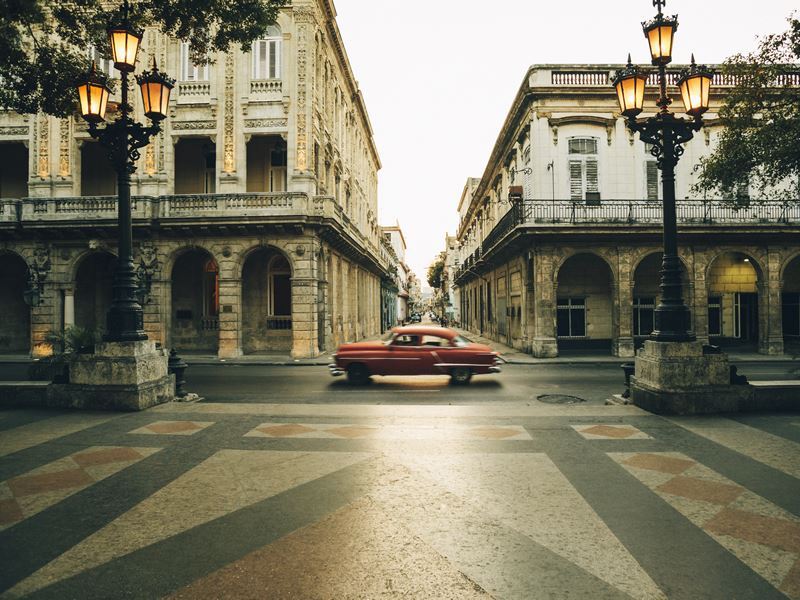 Laid out in the early 1900's, the Malecon is the city’s evocative sea drive, constructed as an oceanside boulevard for pleasure-seekers. It’s long-been a popular gathering place for sunset-watchers, wistful Florida-gazers, philosophers and poets, lovers and fishermen. Today, it’s sometimes called the “world’s longest sofa,” as a spot where the entire city comes to meet for chats, debates and dates. The five-mile long seawall runs along the Atlantic-facing coast as one of the most soulful thoroughfares in the nation, with its atmosphere arguably best around dusk, as the golden light touches the magnificent yet faded buildings for a particularly surreal look.

The Malecon is also the place to be from sunset to sunrise. Be sure to catch the sun dipping below the horizon at least once while you’re here, and then stick around awhile to sip rum while enjoying the sounds of the crashing waves and eclectic music beats. 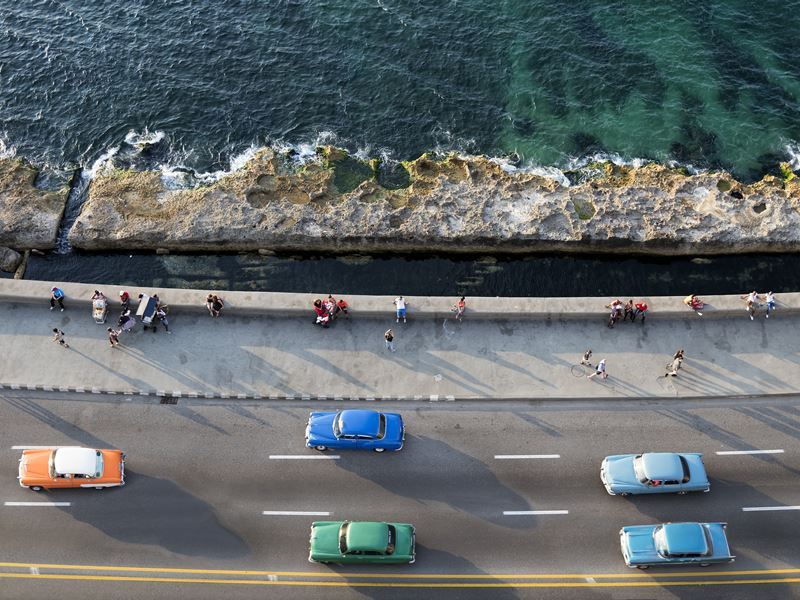 The Museum of Revolution is located inside the former presidential palace, constructed in the early 1900's. Decorated by Tiffany’s of New York, the design of the stunning interior and Hall of Mirrors was inspired by the Palace of Versailles’ eponymous room. Wandering through, you’ll find multiple detailed exhibits that provide an interesting if partisan look at the country’s political past, including the events that led to Fidel Castro gaining control of Cuba. Just outside the museum is a 12-person cabin cruiser known as the Granma, a yacht that in 1956 was filled with exiled rebels, including both Castro Brothers and Che Guevara, and came close to sinking due to overcrowding during their return to Cuba. Just 12 survived the perilous journey, including Guevara and the Castros. 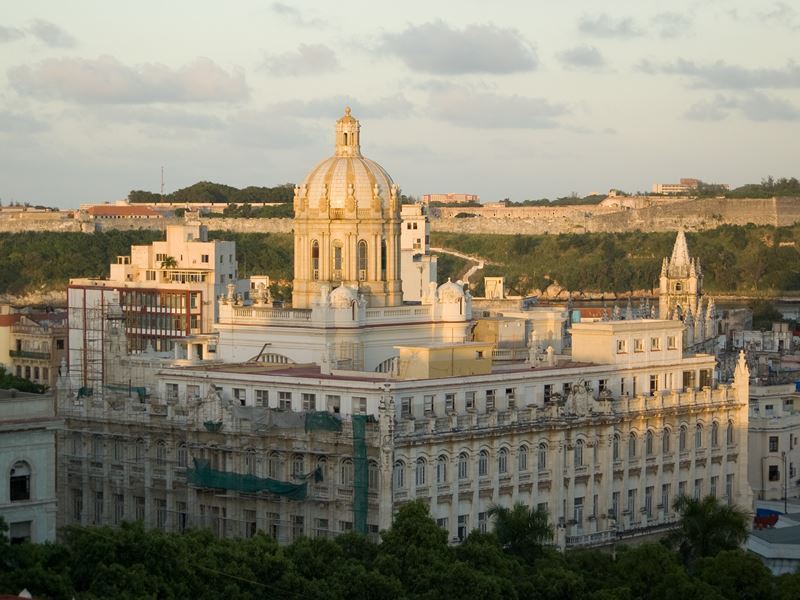 The “Castle of the Royal Fort” as Castillo de la Real Fuerza translates to, is the oldest of the three Havana forts that are still standing in Havana and one of the oldest stone forts in the entire Western Hemisphere. It’s located right in front of the bay in the historic centre and is one of the major attractions in Old Havana, surrounded by a wide moat, with access to the interior through a wooden drawbridge. The fort was built by Spanish authorities in the 1500's to defend the city from invading rival powers and pirates and serves as a poignant reminder of Cuba’s rich history. Today it hosts a maritime museum that traces the nation’s maritime past from pre-Columbia days through the 18th century. Various objects related to naval history can be viewed, including instruments and naval models, and visitors can also learn about the history of navigation in the Caribbean in addition to observing samples of underwater archaeology. 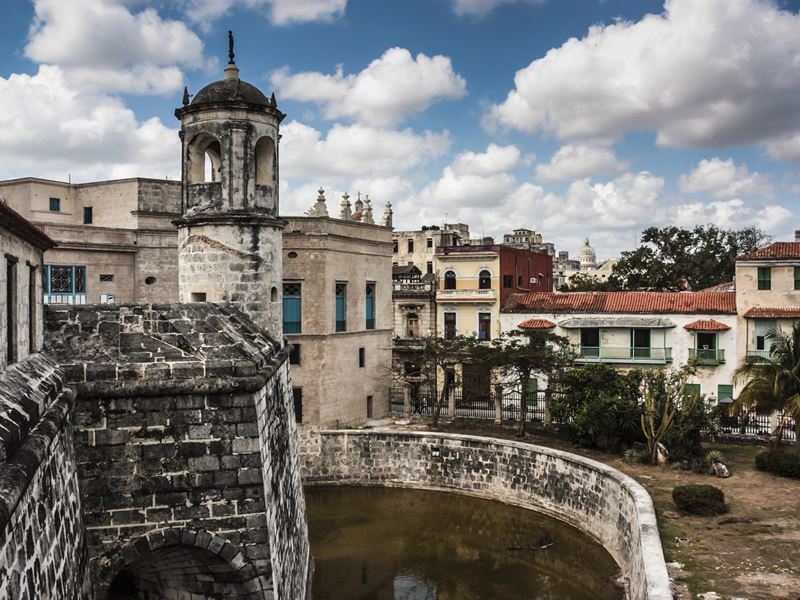 The Palace of the Captains General is a grand colonial building that serves as what’s considered today to be Havana’s most important museum and perhaps its finest architectural treasure. The building occupies an entire block and is one of the best examples of Baroque architecture in Latin America.

The palace holds over 40 exhibition halls that bring the customs, characters and events on national history to life, including the independence struggles from Cuba’s early beginnings to the revolutionary victory in 1959. Some of the highlights include the Uniforms, Banners and Flags and Spanish Armaments rooms which display clothing used by Spanish soldiers along with flags, banners, canes and other décor from various Spanish colonial army groups. Wicker Hall and the Dining Room reflect what it was like in the late 19th century, and include valuable pieces made by French glassmakers and jewellers and luxurious tableware that make it easy to imagine the great banquets held here. 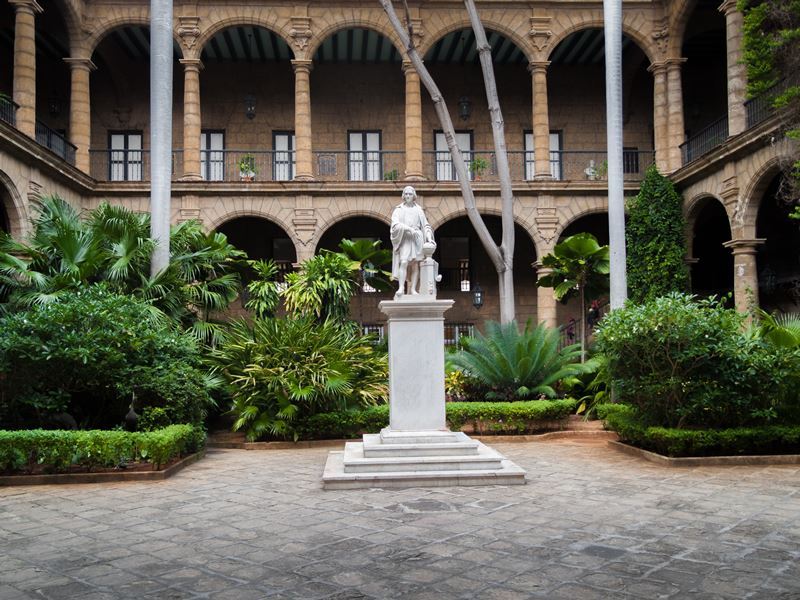 Plaza de la Catedral, or Cathedral of The Virgin Mary of the Immaculate Conception as it’s also called is a definite must-see. The plaza that fronts the cathedral and the church’s baroque façade with its asymmetrical towers are said to be the only example of a baroque construction that contain such features, with one of the towers wider than the other, and are the most visited attractions in Old Havana. A fantastic example of Cuban Baroque architecture, it’s most impressive from the outside, but it’s also worth entering to view the 17th century wooden sculpture of Saint Christopher which his shortened legs that were cut in order to put it into place. 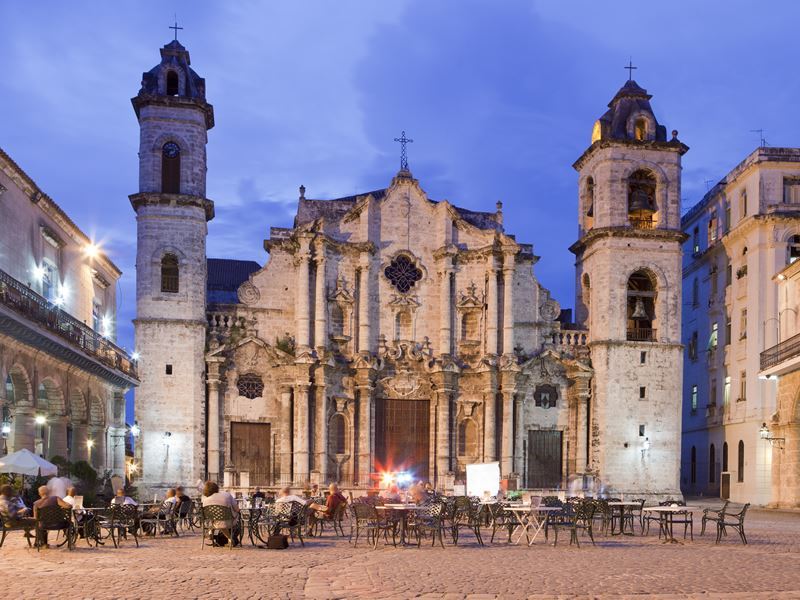 Cuba is famous for its cigars, and taking a tour through a cigar factory is like taking a tour back in time. With Havana the birthplace of the premium cigar, it’s dotted with cigar factories all types. While the well-known Partagas cigar factory behind the Capitol Building has closed, Fabrica Corona and Fabrica de Tabaco H. Upmann are both currently open for public tours. The factories are a good place for picking up the Cuba’s storied cigars. While they are sold on the streets at a cheaper price, the quality of those offerings is questionable. 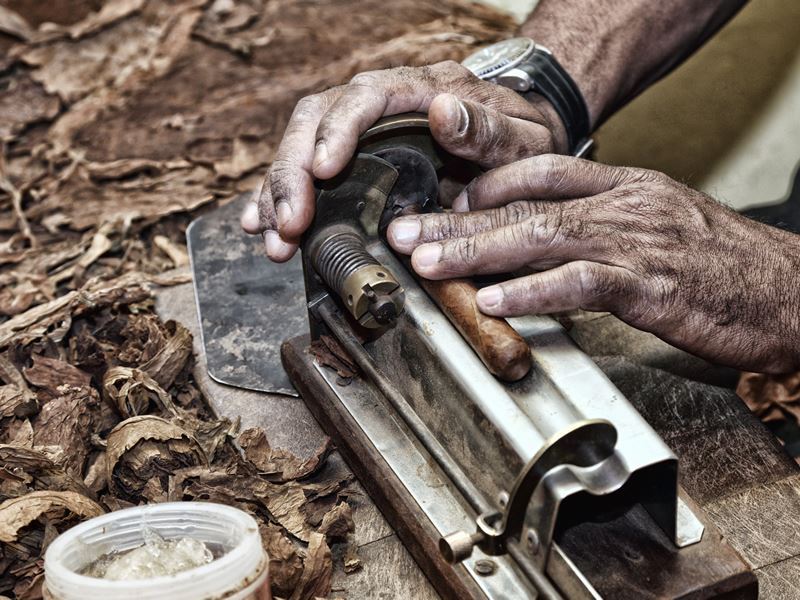 Cubans are lovers of music, and to really delve into Havana’s culture, experiencing the live music scene is a must. In fact, the city is best understood through its music, with sounds emanating from the streets, windows and balconies around nearly every corner. It spans the spectrum from traditional son to high culture, with nearly every restaurant and hotel in town hosting a good house band that plays old favourites.

Pop into the Association of Cuban Writers and Artists where you might even have the chance to hear a Grammy winner on the sax. Café Miramar is well-known among Cuban jazz lovers, drawing some of the best jazz musicians around, while salsa is where it’s at in the Casa de la Música. If you’ve always wanted to learn how, this is a great spot for salsa lessons too. The Tablao de Pancho hosts a supper show which features old-time singers that belt out songs from Buena Vista Social Club, and, of course, the Tropicana is a must-experience, with no visit to Havana complete without catching its sexy cabaret show. It’s been a city institution since it opened back in 1939, and has changed little since its 1950's heyday, immortalised in the classic 1958 “Our Man in Havana.”

Baseball is another very popular pastime in Cuba, and catching a game at Estadio Latinamericano, with its capacity of 55,000 big or bigger than many U.S. major league baseball stadiums, a great way to mingle with the locals and have a good time. While it celebrated its 71st birthday recently, the stadium was given a fresh coat of paint, with its renovated clubhouses, rebuilt dugouts and perfectly manicured grass living up to its nickname: the “Grand Stadium of Havana.” Los Industriales is the home team, akin to the Yankees, with countless fans and more league championships behind them than any other Cuban team. If you’re a baseball fan visiting during the season, which runs from late October through May, attending a game is really a must for an authentic Cuban experience.

The robust culture of street food in Havana really speaks to the history of the nation. Dishes here get their flavour from a varied influence of previous conflicts and migration, which results in an eclectic mix of Spanish, African and Caribbean fare. One of the top ways to learn about the country’s complex heritage, is through your stomach, sampling street food like cassava chips (also called yuca frita), goat stew, pork burgers and coconut pies.

Sip a mojito in the very place it was invented

If you’re going to imbibe, be sure to enjoy a mojito at the place it was invented: La Bodeguita del Medio. The birthplace of the mojito, it’s also known for its high-profile clientele like Ernest Hemingway, though you may have seen it in “Die Another Day,” when James Bond sipped the concoction made of rum, lime, mint, sugar, sparkling soda and ice. It was invented to help refresh and reinvigorate one during the long, sun-filled days and hot nights. In addition to its mojitos, you can look forward to listening to outstanding music in an authentic Cuban atmosphere while looking for the signatures of the famous on the wall, like Nat King Cole and Errol Flynn. They sit alongside a quote that was engraved by Hemingway himself: “My mojito in La Bodeguita, My daiquiri in El Floridita.” 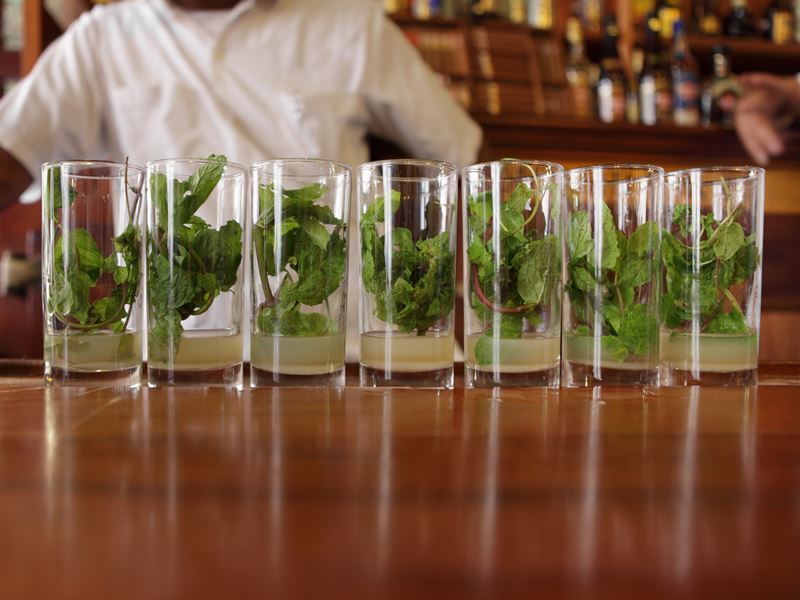 While sampling street food is a must, so is indulging in a meal one of the city’s best fine dining restaurants, at least once. La Guarida is the most famous paladar in all of Cuba, providing a unique setting on the top floor of a dilapidated building in the Centro neighbourhood. It’s seen the likes of Jack Nicholson, Sting and Prince Albert of Monaco and serves contemporary Cuban fusion fare. Café del Oriente offers a distinctly upscale dining experience and is a place where the local politicians often bring visiting diplomats and dignitaries. Here you’ll feel as if you’ve entered the film set from “Midnight in Paris,” where traditional bougie dishes, including lobster thermidor are enjoyed while the live piano player serenades the crowd.

For the ultimate fine dining experience, head to Elite, with its tuxedo-clad servers, black-and-white décor and perfectly plated dishes providing something that’s difficult if not impossible to find in most places these days. 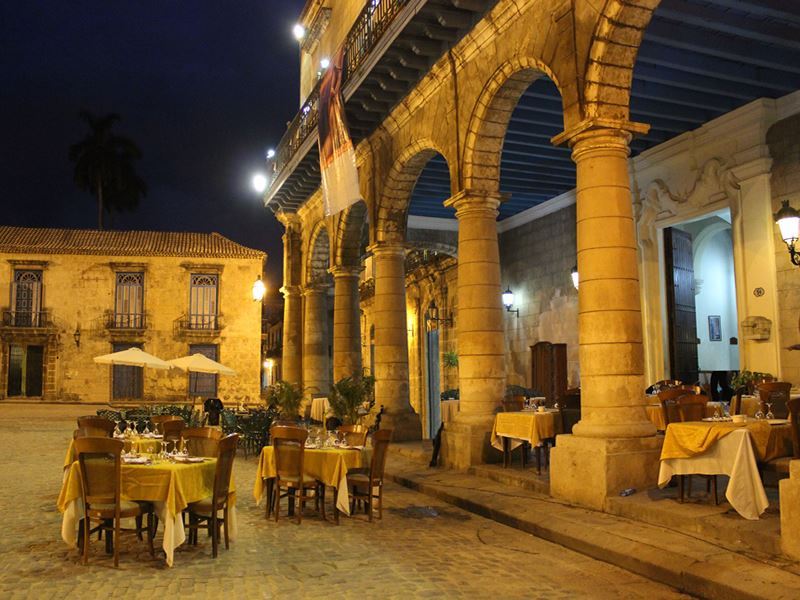 There are a number of great choices for overnight stays in Havana, including the Gran Manzana Kempinski. The five-star property sits in the heart of historic Old Havana, atop one of the remaining sections of the nearly 350-year-old colonial-era wall. It includes three restaurants, three bars, a rooftop pool and a massive spa. 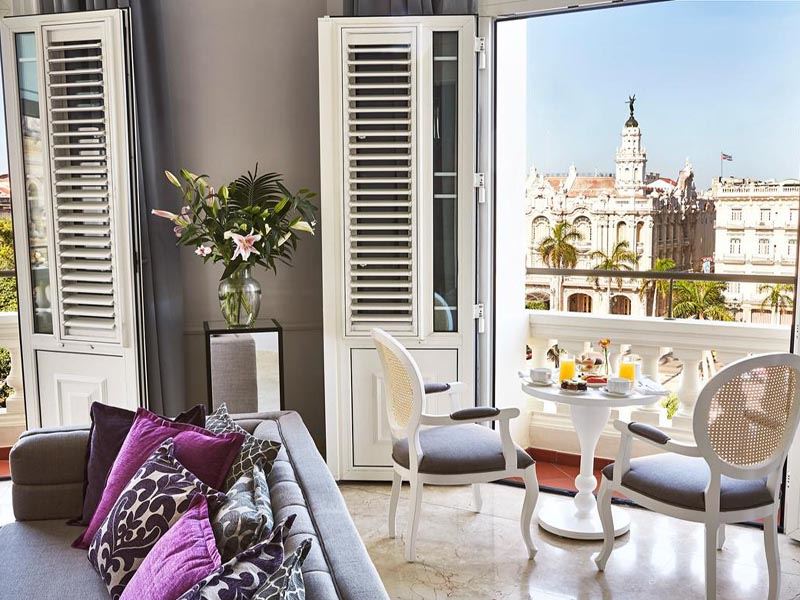 Hotel NH Capri is a polished, high-rise hotel that offers one of the city’s more modern options, steps away from exciting nightlife, while Iberostar Parque Central is an elegant five-star hotel in central Havana just a short walk from the Capitol Building and many other popular attractions, known for its colonial-style architecture and exceptional service.